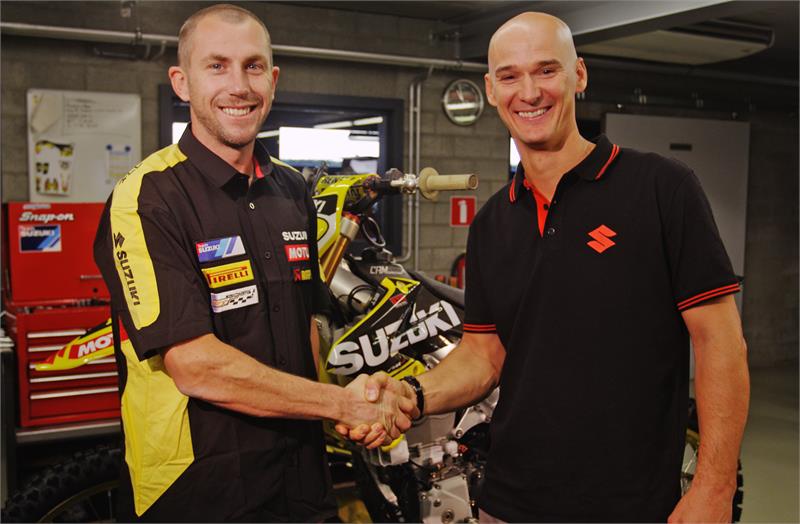 Ben Townley will have his first race aboard his Suzuki World MXGP RM-Z450 race machine in the first week of February when the team heads to Hawkstone Park for the annual international event.

In Late December the factory unit confirmed that the 2016 Hawkstone Park International in the UK will represent the first competitive outing of the new year and giving Team Manager Stefan Everts a chance to see the progress and preparation of Kevin Strijbos and Ben Townley, plus Jeremy Seewer who will race for Team Suzuki World in the MX2 class.

The meeting on February 7th will be a memorable one in several senses.

For Everts it marks his first official race event since coming back to the brand as Owner/ General Manager where he gained the first of his 10 titles in 1991.

For Townley it will be a useful competitive debut outing on the RM-Z450 and since making a surprise comeback from retirement in 2013. The 30-year-old New Zealander will be able to gauge his off-season work only three weeks before the opening Grand Prix of 18 in the 2016 MXGP trail at Losail in Qatar.

For Strijbos it will be the opening chapter in a campaign where he will be keen to erase a frustrating and injury-plagued 2015 and where he will also be hoping to repeat his overall victory from 12 months previously against an expected field of MXGP peers looking to blow off the winter ‰Û÷cobwebs‰Ûª.

Brian Hsu has been counted out of action due to a left wrist injury but Bas Vaessen ‰ÛÒ Suzuki‰Ûªs EMX250 European Championship hopeful ‰ÛÒ will line-up on the RM-Z250 alongside Seewer.

First both squads will attempt to fulfil further testing schedules during January with Everts, Strijbos, Seewer and Vaessen set for Spain in the opening week of the year for a fortnight of riding and work followed by further sessions in Belgium and possibly France.

Townley is scheduled to land in Europe in mid-January and will immediately join the group.

Aside from the Hawkstone appointment Team Suzuki World MXGP is also planning to bolster the entry list of the Valence International in central France one week after the trip to the UK.