Ben O‰ÛªConnor gets the Club Challenge win at Wakefield Park 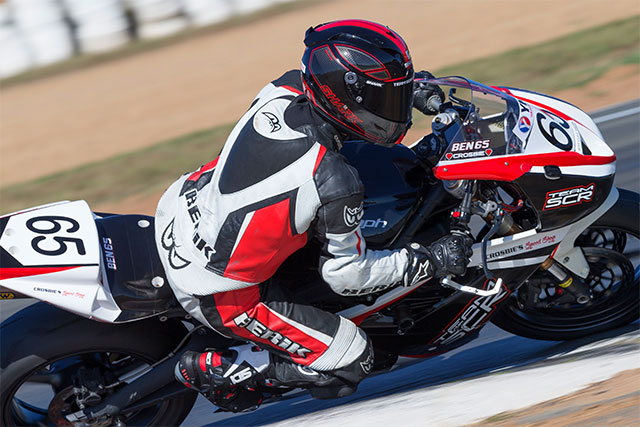 The Club Challenge 600cc presented by White‰Ûªs Racing Products competitors, had the opportunity race alongside the country‰Ûªs best, at Round 2 of the Yamaha Motor Finance Australian Superbike Championship presented by Motul Pirelli, at Wakefield Park Raceway in New South Wales on the weekend.

Yesterday, the class had two eight lap races on the tight and technical Wakefield Park circuit, with the gunning competitors adding to the action at round two of the ASBK.

Triumph mounted Ben O‰ÛªConnor had the advantage of pole position when racing kicked off yesterday, leading the pack into the first corner of their 8-lap journey. O‰ÛªConnor was followed by Gavin Mudie on his Yamaha R6, while Rodney Whitney sotted in to third, with Carl Kitson, Tom Barnett, Adrian Pelegrin battling closely behind.

With two laps in the books, it was Kitson who was hungry for a podium finish, passing Whitney (fourth) putting his Yamaha machine in to third position, behind second place holder Mudie.

The top five pulled away on the field as the race went on, but no one could catch lightening fast O‰ÛªConnor who pulled more than a 7 second gap on his fellow competitors. With O‰ÛªConnor out in front, second position holder Mudie found himself in a battle with Kitson (third), all the while Whitney managed to hold down fourth ahead of Barnett who was hot on his tail.

Unfortunately, on lap five, Whitney pushed his Honda CBR RR a little too hard, crashing on the straight, and causing the race to be red flagged.

As a result of the red flag, the race was declared at the four lap mark and half points awarded, meaning O‰ÛªConnor was awarded with the race two win, ahead of Mudie in second followed by Kitson who finished the race in third. Barnett, and Triumph rider Adrian Pelegrin rounded out the top five.

The third Club Challenge 600cc race of the weekend proved to be a cracker, with competitors launching off the grid with plenty of determination. The undefeated front runner O‰ÛªConnor once again leading the field throughout lap one.

After one lap the running order saw O‰ÛªConnor untouchable in front, while Mudie slotted in to second, trying to keep up with O‰ÛªConnor‰Ûªs pace, while Kitson remained close in third, followed by Barnett and Pelegrin who battled for fourth and fifth.

It was on lap two, that Barnett managed to manoeuvre his machine around Kitson‰Ûªs Yamaha, moving into third position where he would stay for the reminder of the race.

Although there were many attempts to switch positions within the top five, the Club Challenge standings remained unchanged - O‰ÛªConnor proving once again the strength of his Triumph machine to take the chequered flag first. While Mudie crossed the finish line in second, with Kitson close in toe taking third. Barnett secured fourth in the final Club Challenge race, while Pelegrin rounded out the top five finishers.

Ben O‰ÛªConnor who took out the Club Challenge 600cc round win at Wakefield Park, spoke about his time on the track this weekend, while his young son sat on his lap watching with pride.