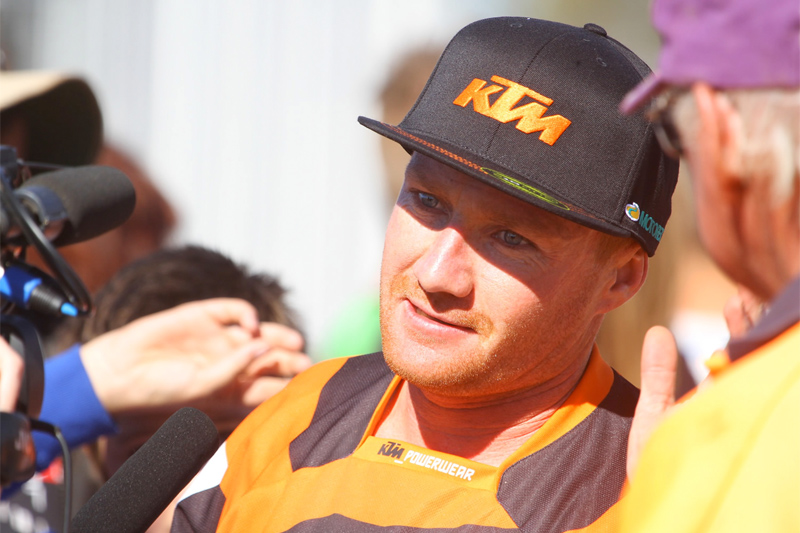 KTM Desert Racing Team Manager Ben Grabham will wrap his recovered hand around the bars of a KTM in a race situation for the first time since his operation mid-year, when he faces the starter at tomorrow's Bathurst Long Track event.

Grabham went under the knife in early August to remove plates and repair damage from a crash suffered on the way to his fourth Finke desert race win in 2011.

Now the 30-time national champion‰Ûªs first race back will occur on a track familiar to him, since he‰Ûªs won numerous national championships there over the course of his long and distinguished racing career.

The Bathurst Long Track will see an 800m granite oval trotting track, and a massive field of over 60 entries in the 450 class, with only the top 12 qualifying through to the final.

‰ÛÏIt's a lot of fun, but something I haven't done since ‰Ûª06 so so I'm just trying to remember what to do and get in there and have some fun." Grabham said. "It's not an Aussie title but it may as well be, and you‰Ûªre pretty much going to have to win your heat to make the final, so it's pretty full on!

"The start here is super important, otherwise with the roost coming off the granite is really something. Many is the time I've missed the start and looked like I've got chickenpox afterwards.

"I have a KTM 450 SX-F that we basically prepared on Monday, Apro helped us out with engine and suspension, but we haven't gone nuts, basically whacked something together from left over bits from the desert racing, and I've done a little bit of training on it on Tuesday and Wednesday, it‰Ûªs feeling pretty fast.

"I know there‰Ûªs some superfast bikes out there, but I think it'll be a bit of fun.Realistically I'm only just right to race with my hand again, but I know one thing, you've got to be superlight for this one, so that on each of the next few days!

"There's a load of super quick young kids on KTMs out there but I don't know any of their names, although I'm sure I'll know a few of their names by the end of it!‰Û