Ben Burke eyeing another podium steal at Round 3 ASBK 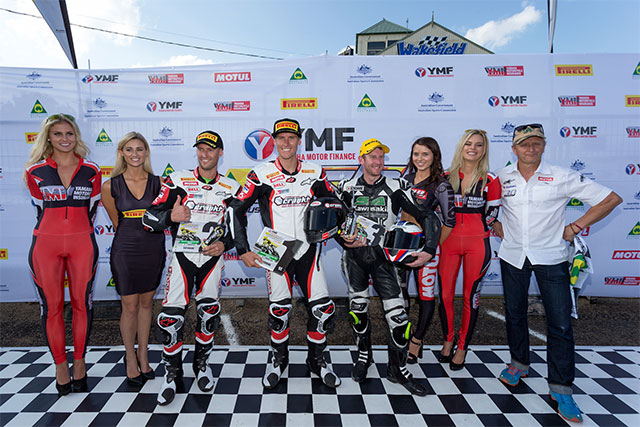 Ben Burke put on an outstanding performance at the second round of the 2016 Yamaha Motor Finance Australian Superbike Championship presented by Motul Pirelli at Wakefield Park only a few short weeks ago, collecting third place on the podium at the conclusion of the round, in a talent filled Yamaha Motorcycle Insurance Superbike class.

The South Australian based ASBK privateer made his podium debut amongst factory riders at the second round, proving he‰Ûªs got what it takes to battle with the big guns in 2016.

With a standout performance under his belt there is no doubt Burke is hungry for more, and will be eyeing the podium once again at Round 3 of the ASBK at Sydney Motorsport Park next weekend.

Burke had time to answer a few questions before next weekends third round.

At round two of the ASBK, you blew people away when you finished on the Superbike podium, how did that feel for you?

It was a good result, however I thought I could have done better that weekend. I felt like I was up against it from the start, I hadn‰Ûªt tested at Wakefield Park prior to the round, so it wasn‰Ûªt exactly what I wanted it to be. I was pretty happy that I still got the result of third. I feel as through even though I put in strong, consistent races, it was probably gifted to me a little bit from other rider‰Ûªs misfortune in racing.

Were you surprised by your performance?

I wasn‰Ûªt surprised that I was up the front, I was actually a little disappointed with my performance in a way - I thought I should have been running with the lead pack a lot better than I was, but I was happy to take the third anyway, and be standing on the podium at the end of the day.

There is a lot of talent within the Superbike class in 2016, how did it feel to beat some of the fastest riders in the country at Wakefield Park?

It was great to be able to beat those guys. I consider myself to have as good of a fighting chance as anybody lining up on that Superbike grid. I expect within myself that I should be fighting for the front with the factory guys at all of the rounds this year.

Do you think that your consistency is going to be able to hold back the factory guys for the rest of the season?

I think my consistency will help a lot. I have struggled for the last two years to grasp the old bike, but I am on a new bike this season and it seems to suit me quite a lot, which really helps. We are still developing a new motorcycle, but if we are getting these results already I think there is no reason that we can‰Ûªt improve and continue in my current form for the rest of the season.

With so much talent in the Superbike class what's it going to take for someone to win a championship this year?

To be able to win the championship for anyone this year, you really need to have consistency on the bike and finish as many races as possible. The most important thing is you really have to want it, if your hearts not in it, its not going to come through for you when it comes down to it.

Have you raced at Sydney Motorsport Park before? What was your experience?

I have raced at Eastern Creek before and luckily for me Eastern Creek is the only track that I have raced the new bike at. I feel as though leading into this round I am little bit ahead of the game than where we were sitting for the previous two rounds. There is going to be a lot fewer surprises this round having already had the experience around the circuit, compared to starting from scratch.

You must have some added confidence ahead of round three of the ASBK especially after the result from Wakefield Park?

Yeah, I am coming into this event with more confidence. I think we can expect to be fighting in the front group for this round at Sydney Motorsport Park. There is no doubt that I am expecting to finish in the top five at round three, I think that‰Ûªs an achievable goal for myself and there is no reason that I shouldn‰Ûªt be able to do it.

For more information on Round 3 of the 2016 Yamaha Motor Finance Australian Superbike Championship presented by Motul Pirelli, head to www.asbk.com.au.