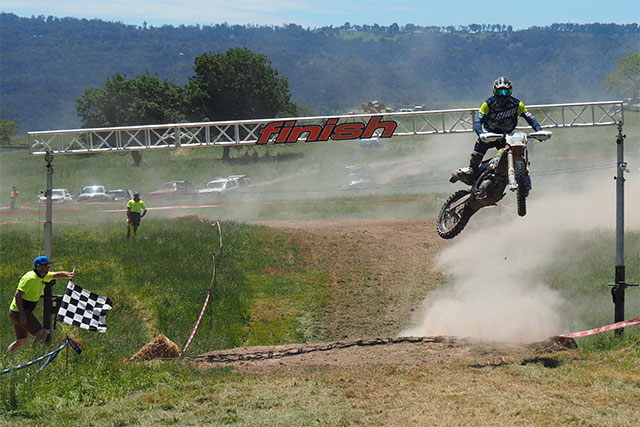 It was a fresh and frosty start to the final day of the 2016 Yamaha Australian Four Days Enduro Championship at Merrijig in Victoria, with the daunting challenge ahead for competitors, tensions were on high.

Although anticipating racing this afternoon, competitors had to turn their attention to one final test around the already built Final Moto track. Despite the top three the favourites to win the first test of the day, it was this year‰Ûªs rookie KTM mounted Jack Simpson who cracked the throttle on to finish with a final time of 3 minutes and 14.269 seconds.

Next to fire across the finish line with the fastest times, were CDR Yamaha‰Ûªs Chris Hollis (3:17.925), Yamaha mounted Brad Hardaker with a final test time of 3 minutes and 18.428 seconds. Bellino and Milner finished the Stoney Moto Test in 6th and 9th position respectively due to the damp and misty conditions first up this morning.

The natural terrain style Motocross track this morning offered no forgiving elements, with the dust, rocks and jumps set to play havoc in racing today. Before the E1, E2 and E3 classes could battle it out in the Final Moto to conclude their Four Days of competition, the Masters, Veterans, and Women‰Ûªs tried their hand at the demanding course first to cement their fate in their respective classes.

Bikes launched off the grid in a rumble of machines as it marked the commencement of the A4DE Championship E1 Final Moto. Active8 Yamaha Yamalube‰Ûªs Josh Green had all eyes pinned to the front as he took the hole shot, leading from his remaining competitors.

By the end of the first lap, Green had a clear lead followed by Husqvarna Enduro Racing Team‰Ûªs Glenn Kearney, and after a battle through the first corner Simpson was sitting third, pushing to catch the tail of the Husqvarna in front of him.

Although it seemed Simpson would catch the Kearny in a heated fight, by the conclusion of the race positions remained. Green claimed victory solidifying an E1 Championship for himself after a long year of recovering from surgery. Kearny in his final race before heading in to retirement settled for second in the race therefore second in the E1 Championship.

Coming off the back off what has been a whirl wind year for the young ex motocross demon Jack Simpson, he took a third place victory to make it one hell of a year for the young gun. Proving he has well and truly dropped the Motorcross title and has joined the Enduro family as a respected and anticipated great Enduro rider.

The race to watch today was the E2 class, where Bellino, Milner and Hollis went head to head fighting to take home championship glory. Milner had more at stake than most, as he was in the running to win his fifth Yamaha A4DE consecutively, writing his name in to the history books.

Scurrying off the line bar to bar, the E2 class catapulted off the line bar to bar all fighting to take the hole shot at turn one. Milner shoved his Yamaha up the inside and was the first man out of the corner however not keeping that title for long his team mate Hollis made the move over the Force Accessories jump stealing the lead.

Unfortunately for Milner his bad luck didn‰Ûªt stop there, a crash relegated him positions, with Bellino and Motul Pirelli Sherco Factory Team‰Ûªs Matthew Phillips now sitting second and third respectively, all on the first lap of the race.

Hollis looking all too comfortable on his Yamaha began to widen the gap through the corners of the track and by lap three had almost five seconds on Bellino. By the fourth lap the gaps between the top four had lengthened each seconds apart from the rider behind.

Spectators were on the edge of their seats, and lining the fences to witness the battle unfolding on track. The dust making it extremely hard to find their way through. However it was a roar of praise when Hollis crossed the line for the final time cementing a win, and finishing off his Enduro career with an all mighty win.

Bellino did all he had too, to fulfill what he came here to do, and that was to win not only the E2 Championship but also the outright Championship after four long days of heat, physical challenges, and very stiff competition from Yamaha rival, Milner.

The final race of the day was between the E3 competitors - particularly Husqvarna Enduro Racing Team‰Ûªs Lachlan Stanford who only had four seconds lead on second placed KTM Enduro Racing Team‰Ûªs Daniel Sanders in the overall Championship standings. By the time bikes were lined up on the grid, the temperature had hit 30 degrees and the sun was belting over Merrijig.

Stanford was the man of the moment, who took the hole shot and the lead. However, pushing a little too hard at the beginning of the race Stanford fell victim to the dust and the powder on the ground crashing. Managing to redeem himself Stanford dropped to fifth position.

Yamaha mounted Tommy Mason was the man behind Stanford slipping straight in to first place after the crash, with a hard charging and determined KTM Enduro Racing Team‰Ûªs Daniel Sanders just behind.

By the second lap Sanders had pulled an even bigger gap on Stanford who throughout the back section of the track managed his way to third position, now hunting down a second placed Sanders. However, among the dust, Sanders pushed that little bit extra to steal the lead from Mason and kept pushing to open up a gap between the pair.

On the showing of the last lap board, lapped riders came in to play but with the top three all spread out there was not advantage gained as 'Chucky' performed a heel clicker coming over the finish line with one lap to go.

With positions remaining the same on the final lap it was Sanders who crossed the finish line victorious. Sanders had done enough throughout the Final Moto to eradicate Stanford from the overall lead, taking the E3 Championship as his own.

Sanders celebrated with an all Australian "Shoey" among the spectator lined fence to congratulate the man in orange. Although Tom Mason finished the race in second and was third placed Stanford who was relegated to second in the championship, leaving the final position on the E3 Championship podium to Husqvarna mounted Lyndon Snodgrass.

Today marked the fourth and final day of the 2016 Yamaha Four Days Enduro Championship and with all class Championships crowned and the outright title taken by French man Bellino, competitors now make their way home to recover until next year‰Ûªs A4DE.