Behind the Scenes with Monster Energy Yamaha Tech3 Part 1 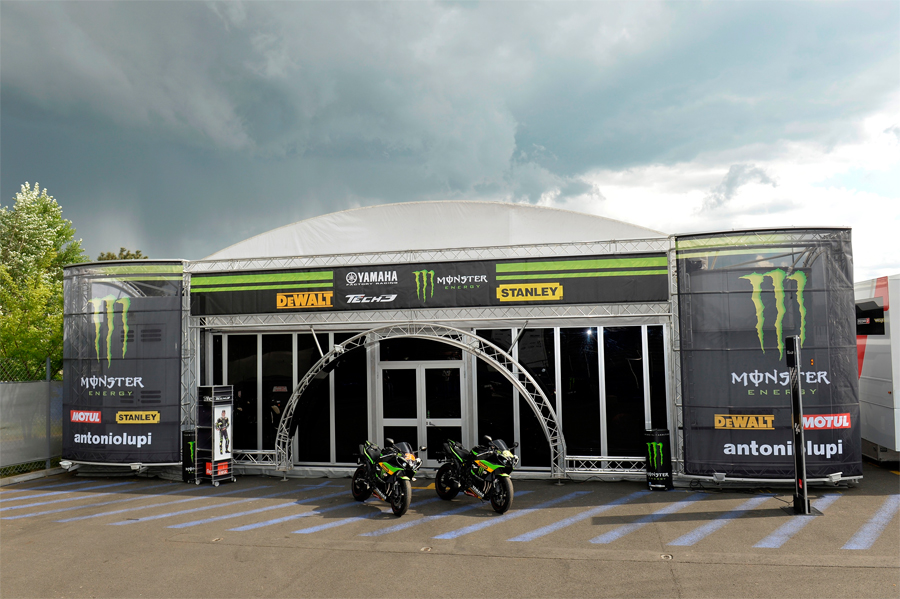 As the lights on the starting grid turn green on a Sunday, a flurry of excitement descends upon the motorsport planet who become captivated for 45 solid minutes as adrenaline levels soar for everyone, watching the most entertaining two wheeled motorsport series on the planet.

However, what needs to be undertaken ‰Û÷behind the scenes‰Ûª to ensure this happens 18 times a year?

The Monster Yamaha Tech3 Team aims to shed light on the actions and endeavours that take place for a Grand Prix race operation before a wheel has even been turned. This documentary series entitled ‰Û÷Insight‰Ûª will offer inside information, introduce key members of the team, cover various aspects of the business, and examine routines which have to be undertaken to race.

There is no better way to begin this exciting and innovative series than illustrating the coordination required to move the Monster Yamaha Tech3 Teamd the Tech3 Racing Moto2 Team from one international race circuit to another, both inside Europe and for ‰Û÷Flyaway‰Ûª races. 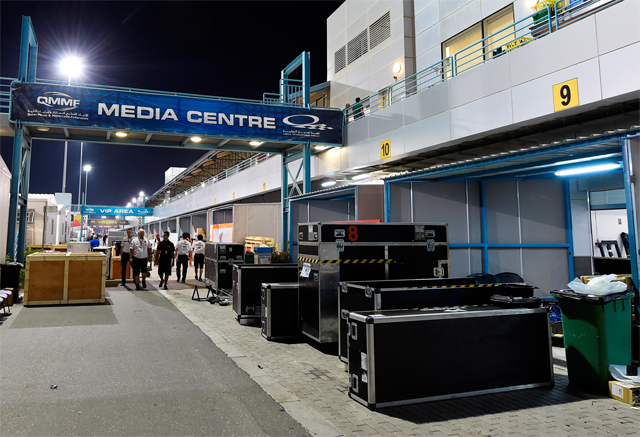 The organisation of the shipments of the team‰Ûªs crates is facilitated by working in conjunction with the championship‰Ûªs official partner, called SEL (sports & events logistics) who have taken care of the oversea transportations for MotoGP teams since 1996.

Both Tech3 teams load their specific motorcycles, wheels, pit box complex‰Ûªs, spare parts and rider equipment as well as everything else which is necessary for racing into specifically build flight crates. Each crates suits the specific need of its content in dimension and safety.

The Tech3 Racing Moto2 Team uses 7 flight cases amounting to 2500kg, whereas the Monster Yamaha Tech3 MotoGP team uses 25 with a total of 8200kg in weight. Generally, it can be said that the larger the team, the higher the number of flight cases, with Factory MotoGP teams potentially using as many as 40-50 and a two rider Moto3 team only requiring 3 cases.

The courier trucks then proceed to collect the fully loaded MotoGP and Moto2 Tech3 cases from the team‰Ûªs headquarters in southern France, and transfer them to the relevant airport. However, the MotoGP bikes are shipped from Japan at the beginning at the season and meet the other equipment at the track.

After the racing has finished, everything is reloaded into the cases and transferred to the airport before flying back via the freight airplanes to the next flyaway race. 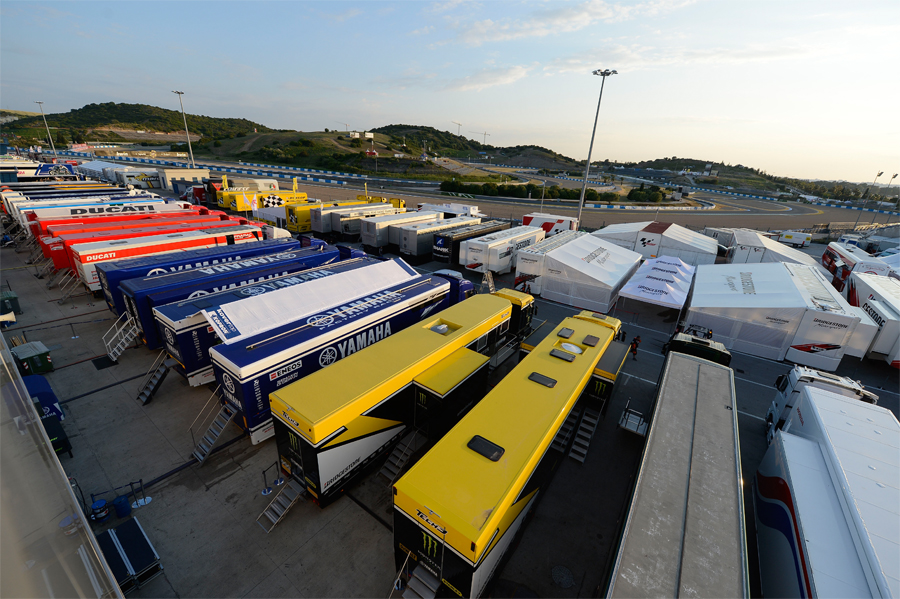 Overall, the MotoGP World Championship consists of approx. 160 trucks including Tech3‰Ûªs vehicles, and if lined up together they would equal an astonishing 3 kilometres in length
Other racing products such as race fuel and the tyres, that will be used by the Monster Yamaha Tech3 Team are distributed to the destination by sea and are shipped 2 or 3 months in advance for flyaway races. This kind of organization requires meticulous planning and organisational skills, but thanks to the professionalism of SEL, the teams‰Ûª equipment arrives at the track ready for the weekend‰Ûªs world famous racing.

All machinery and items are grouped together as much as possible for the flyaway races for the season. When travelling from one race to another, the Tech3 flight cases are collated together with the additional MotoGP team‰Ûªs 600 with 200-300 further cases for Dorna, which together weight a colossal 320 tonnes in total. The crates are loaded into three specially assigned, freight airplanes with one plane for MotoGP, one for Moto2/Moto3 and one for Dorna.

For European races, the Monster Yamaha Tech3 Team and the Tech3 Racing Moto2 Team use their own trucks to transport the motorcycles and race equipment between GP‰Ûªs. There are six trucks used and owned by Tech3 ‰ÛÒ two are for the MotoGP Team and contain Bradley Smith and Pol Espargaro‰Ûªs motorcycles, spares and pit box, with a further truck containing every racing necessity for Marcel Schrotter and Alex MariÌ±elarena‰Ûªs Moto2 weekend.

In addition there are three Tech3 trucks which carry the hospitality setups and units used to feed the team and riders, as well as offer superb services to guests. 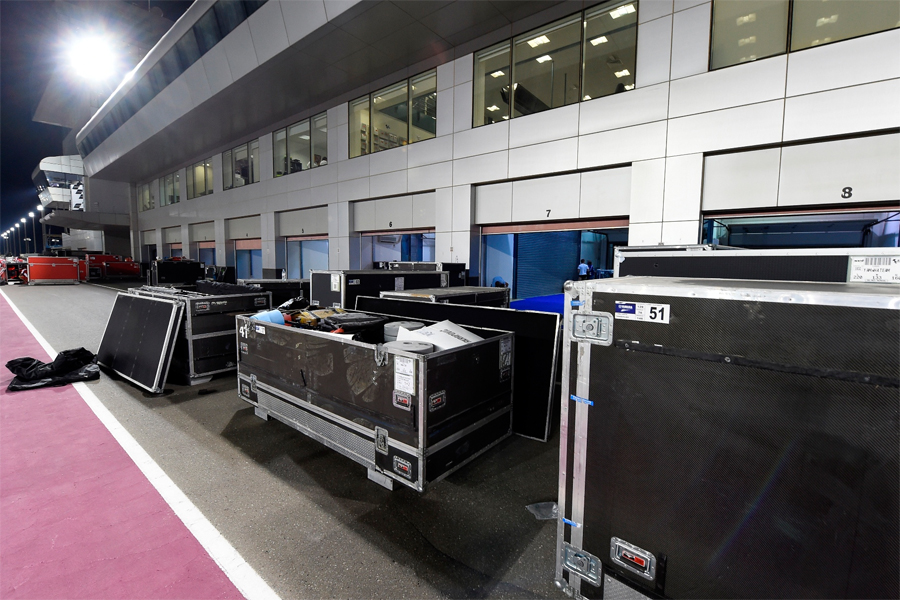 After the racing has finished, everything is reloaded into the cases and transferred to the airport before flying back via the freight airplanes to the next flyaway race.
Overall, the MotoGP World Championship consists of approx. 160 trucks including Tech3‰Ûªs vehicles, and if lined up together they would equal an astonishing 3 kilometres in length. Once the teams‰Ûª fleet of professional race trucks have arrived at the circuit, the drivers are required to wait for their allotted entrance slot to the paddock.

The coordinating of where the trucks will be positioned begins two months before the trucks arrive. The first trucks get parked on Sunday, exactly one week before the racing starts.

The Monster Yamaha Tech3 Teams preparations actually start on Tuesday morning, when the hospitality unit is granted access to the paddock and is allowed to setup, before the MotoGP race trucks are permitted to enter the paddock in the afternoon. Once the MotoGP team trucks have parked outside the debikes in the newly construct pit boxes and is also a day for media appointments for the riders, before the action begins on the Friday.

Once the trucks are all parked, the pit boxes have been set up and the immaculate hospitality units are erected, the Paddock is a mesmerising sight to behold. It is approximately 40,000 metres squared in size and consumes more electricity than an entire village during a Grand Prix weekend and holds close to 2000 permanent members of staff for each GP which includes the riders, team staff, journalists, and anybody else who helps to keep the action on track going.

The transportation, organisation and setup are integral to a successful weekend for the Monster Yamaha Tech3 Team with many factors to consider before the prototype MotoGP machines are even turned on. It is a hidden but vital aspect for a MotoGP team to continue their challenges on track.

The next documentaries will give exclusive insights into the operations that the Tech3 Team must undertake and will be published every week when there is no MotoGP race in action, with the following title coming in a fortnight‰Ûªs time.