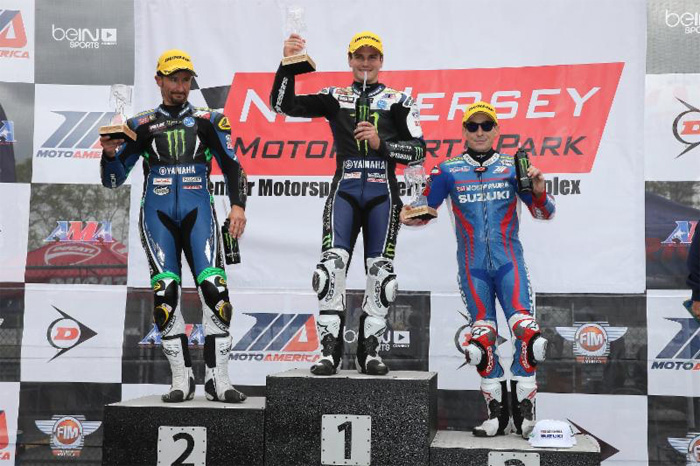 If tomorrow's two Superbike races are anything close to today's Superspole session then fans at New Jersey Motorsports Park are in for an action-packed Sunday as the top seven qualified within a second of polesitter Cameron Beaubier for the MotoAmerica Superbike Championship of New Jersey.

Beaubier set the pace in Superpole 2, the defending MotoAmerica Superbike Champion earning his second pole position of the season and the seventh of his career with a lap of 1:21.390 on the factory Yamaha R1. But his rivals are close with teammate Josh Hayes just .174 of a second behind in second and Yoshimura Suzuki's championship points leader Roger Hayden third - and just .251 of a second off Beaubier.

Beaubier has been fast all weekend at NJMP and he managed to survive a crash-filled final practice session on Saturday morning - a session that claimed several riders, including his teammate Hayes. And not once but twice.

"I just put my head down in the beginning with a brand new soft tire, felt pretty good, clicked off some mid- to high-21s and was just trying to get a good rhythm going," Beaubier said of Superpole 2. "I made a couple of small mistakes here and there, but overall I felt really good. I felt like I had a good race pace in the dry, and I felt decent in the wet. Whatever happens tomorrow, I think I'm ready."

Hayes walked away unscathed from two crashes in the final practice session and he wasn't alone as several went down in the cold conditions.

"I felt okay on the motorcycle, no real problems other than being a little gun shy on that side (the left side of the tire)," Hayes said. "I just don't want to fall down again. I didn't make it very easy on my crew tearing up both motorcycles and giving them a lot of work to do to provide a good bike for qualifying."

Championship leader Roger Hayden, on the Yoshimura Suzuki, will fill the front row for Sunday's two races. Hayden's best lap was a 1:21.641 - just a tick slower than the two Yamaha teammates.

"This afternoon definitely felt a little better," Hayden said of the track conditions. "It's hard to keep heat in the left side of the tire, just cause there's only a couple of left-hand corners and they are pretty slow. So this afternoon, with the track temperature up, that seemed to be a little better."

Hayden said he didn't feel fast in Superpole 2, though the results show otherwise.

"I didn't feel like I was riding that good," Hayden said. "I was rushing the corners and stuff, so I'm really happy with the front row. It's important for this place because it's really tough to pass. With the weather coming in maybe tomorrow, the closer you are to the front the less chances are of things happening. Glad to be on the front row and these guys did a great job, did a good lap. Looking forward to having a good one tomorrow."

Row two for tomorrow's Superbike races will be led by the surprising Hayden Gillim, the Cycle World Suzuki rider lapping in the 1:21s with a 1:21.816 on his Bazzaz Superstock 1000-spec GSX-R1000. He led Broaster Chicken Roadrace Factory's Jake Gagne and Yoshimura Suzuki's Toni Elias, the Spaniard having to come through from Superpole 1 as he was struggling in his first visit to New Jersey Motorsports Park. 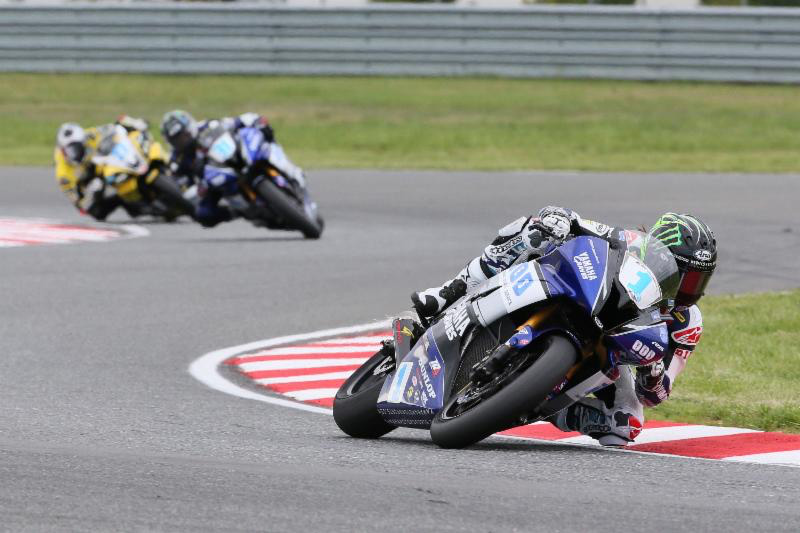 There was plenty of racing action on Saturday at NJMP with the first of two Supersport/Superstock 600 and KTM RC Cup races running on a cloudy day at NJMP.

The Supersport victory went to a rider who was happy to turn his season around with a win: JD Beach. The defending MotoAmerica Supersport racer won his first race of the year after a dominating 2015 season in which he won eight races. Beach sped away at the start in front of his teammate Garrett Gerloff, the winner of three straight races to start the season, and increased his lead when the pack of four at the front encountered lapped traffic. That gave him a gap that he held to the finish, ultimately beating Gerloff by 2.834 seconds.

"My plan each race is to get the best start I can and just go," Beach said. "You never know what's going to happen so if there's guys going down or something, I'd rather be out front. I was able to get a good start and somehow go faster than I did this morning. I wasn't really expecting that, but it just feels really good to get a win this year. The team has been working so hard and I've just kinda felt like I kept letting them down. Back home I've been training so hard and working hard and doing the things I did last year, but we just couldn't get something to click. It was getting to the point of being like 'Can I still do this?' It came easy last year. I'd just get on the bike and go and it's what Garrett's been doing. He goes out there and if it's wet, dry, whatever he just hammers and is fast. This year I couldn't get it figured out. It's still just one win, but it's nice to finally be heading back to that direction."

Sixth place overall went to Superstock 600 class winner and championship leader Bryce Prince. Prince was well clear of second-placed Conner Blevins on the EMR Excel Racing Kawasaki, the Oklahoman getting the better of HB Racing/Meen Motorsports' Dakota Mamola, who was third in class and eighth overall.

The KTM RC Cup races at NJMP were expected to be a battle between New Jersey racers Brandon Paasch and Anthony Mazziotto III and that's what it ended up being. With both riders coming into their home race with a victory apiece, they led qualifying and they led the pack at the finish of the 13-lap race. But it was Paasch getting the upper hand at the finish line, topping Mazziotto by just .166 of a second with Ashton Yates just as close in third - .186 of a second behind. Brandon Altmeyer, who finished third in the first two races at Road Atlanta, ended up fourth.

"My first thought was to get out front and just go," Paasch said. "I knew it wasn't going to work after a couple of laps. I kept trying, but then I was like, 'I don't know why I'm doing this?' I just fell back and stayed back there in fourth, fifth for a little bit and the last couple of laps I just started making moves because I knew I had to be at least second coming out on the straightaway. I wound up leading on to the straightaway which wasn't the ideal thing, but that's what happened and it worked."