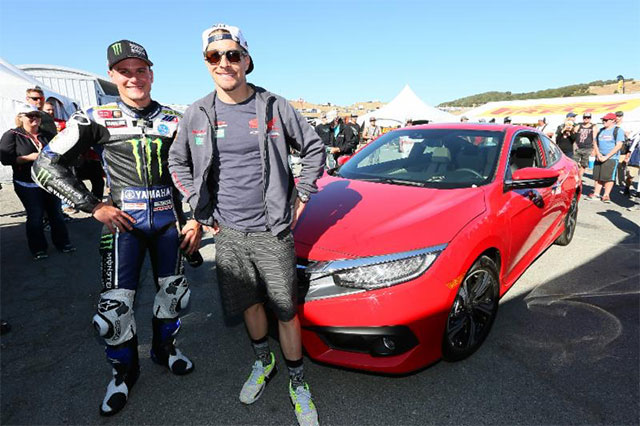 Monster Energy Graves Yamaha teammates Cameron Beaubier and Josh Hayes both came away with MotoAmerica Superbike victories on a sunny Sunday at Mazda Raceway Laguna Seca with Beaubier leaving the Monterey Peninsula with a 2016 Honda Civic Sedan while Hayes left with his 60th career Superbike win.

Beaubier won race one and finished second in race two and that earned him the Honda Civic as the winner of the three-race Honda Superbike Showdown that concluded on Sunday with the Honda Superbike Showdown of California. Beaubier amassed 127 points over the three-round (six-race) series to best Yoshimura Suzuki's Toni Elias by 13 points, 127-114. Hayes ended up third with 99 points.

Hayes finished third and first in the two races at the 2.238-mile Mazda Raceway Laguna Seca, but lost another four points to Beaubier in the race for the 2016 MotoAmerica Superbike Championship that resumes in six weeks with the season finale at New Jersey Motorsports Park. Beaubier takes a 29-point lead over Hayes to New Jersey with Elias another six points behind in third place. Elias' Yoshimura Suzuki teammate Hayden basically took himself out of championship contention with a crash in race one and a fourth-place finish in race two. Hayden now trails Beaubier by 59 points with 50 championship points up for grabs in New Jersey's two races.

Meen Motorsports' Josh Herrin, meanwhile, became the second MotoAmerica Champion of the 2016 season as he was crowned after finishing eighth in race two. Herrin now has an insurmountable 50-point lead heading to the season finale at New Jersey Motorsports Park. 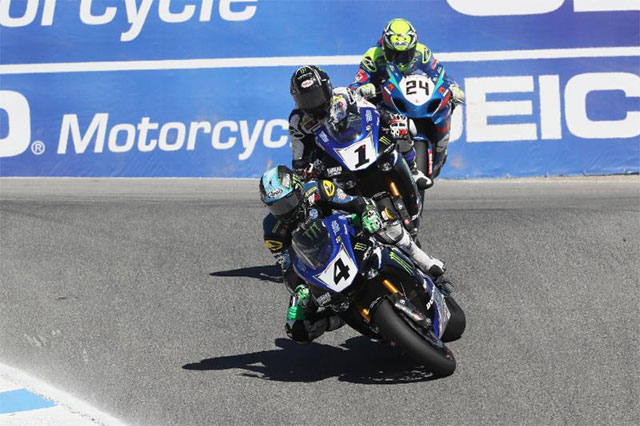 Josh Hayes (4) won his 60th career Superbike win on Sunday afternoon at Mazda Raceway Laguna Seca with a victory over Beaubier (1) and Toni Elias (24).
Both races were thrillers in front of a Sunday crowd of 22,912 spectators (a three-day crowd of 61,052 attended the race that was held in conjunction with the World Superbike Championship) with Beaubier besting Elias by just .300 of a second in race one and Hayes beating Beaubier by a scant .257 of a second in race two. Hayes was 1.8 seconds behind in third place in race one with Elias 1.6 seconds adrift in third place in race two.

"At the beginning of the race, I was getting a little nervous," Beaubier said after taking his eighth win of the season in race one on Sunday. "I was getting a gap put on me. I almost ran into Toni Elias on the fourth lap and I dropped behind Roger (Hayden) and had to catch up. I feel like at the beginning of the race their bikes were working better with the new tires and as the race went on mine seemed better than theirs. I'm really happy with the win and big thanks to my team."

In race two Hayden was fourth with Corti ending up fifth overall and first in the Bazzaz Superstock 1000 class. Scholtz was again second in class with Morais third. Herrin ended the race in eighth, but that was enough to earn him the 2016 Bazzaz Superstock 1000 title. Corti's HSBK Aprilia team filed a protest against Herrin's Meen Motorsports Yamaha, but the team's Yamaha R1 was found to be legal.

Millennium Technologies/KWR's Kyle Wyman and Lewis rounded out the top 10.

"This one had the end result that I was looking for in the first one so I'm really proud to win this race for my boys and to put on a show for all the fans who came out. It was an incredibly fun race. It was nerve-wracking. Like I said on the podium, I got tired of holding my breath and closing my eyes so much waiting for the Spanish Stud Missile over there.

"Every time I made a mistake it was like, 'Oh no, here it comes.' I got a bit of a surprise when it was Cam (Beaubier) going into the last turn. I knew I was pretty tight and I was like 'He doesn't like being down there.' He's a little bit smaller than me and still has a little growing to do so I was a little worried because I know he gets a good run off that last turn. So it was just getting it turned and get it pointed straight and accelerating as smoothly and as best I could. He had a pretty big one next to me so I was like, 'Hang on little buddy.' Even when that happened, I was still nervous that Toni was coming. I thought he was somehow going to still dive-bomb me before the finish line."

"I still have got a lot of work to do to try and overtake Garrett in the points," Beach said. "He still has a good gap. I still need to win the last two races, but we're just going to keep trying. Now I owe Valentin (Debise) some money for beating Garrett because he got second. It's a small fee now, but after the next couple of races if I can overtake the points the fee might go a bit higher. It's kind of an incentive program for him (Debise)." 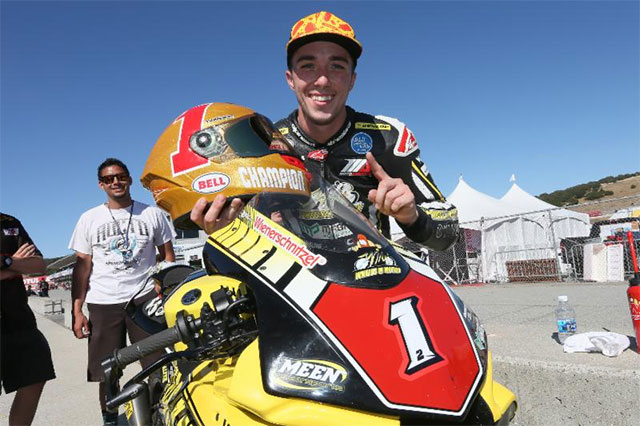