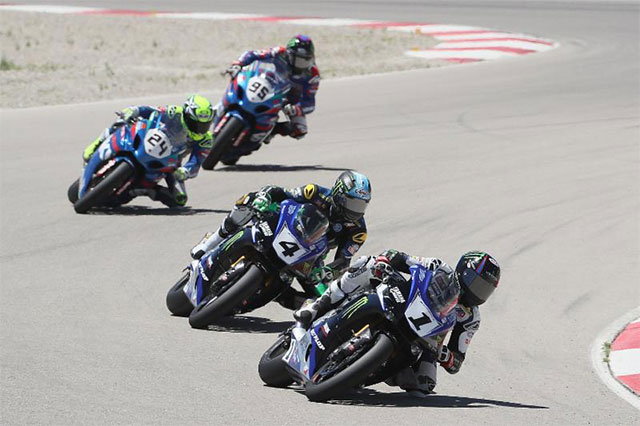 Monster Energy/Graves Yamaha's Cameron Beaubier moved out of a tie with 2006 MotoGP World Champion Nicky Hayden and into sixth on the all-time AMA Superbike win list with his 18th career victory in race one on a sunny Saturday at the Utah Motorsports Campus.

A few hours later, however, Yoshimura Suzuki's Toni Elias turned the tables on his rivals to score the victory, his fifth of the season, in what was the second scintillating Superbike race of the day in Utah.

The margin of victory in both races - combined - was just .291 of a second.

Race one was the normal Superbike thriller with Beaubier's teammate Hayes surprising even himself with a pace that had him at the front of the pack from the start and a pace that kept him there for the majority of the race. That was until Beaubier upped the pace with a 1:49.776 lap to take over at the front on the 16th lap. From there he was never headed, winning his seventh race of the season by just .171 of a second over Hayes. Yoshimura Suzuki's Roger Hayden was third, 1.1 seconds behind, with Elias a few tenths behind in fourth and seething with grip issues.

"I felt like I had a couple of areas where I was stronger than Josh (Hayes)," Beaubier said after race one. "But he had a couple of areas where he was stronger than me also. I knew Rog (Hayden) and Toni (Elias) were right there and I didn't want to wait too long to try and make a move on Josh just because I know it's just as easy for Toni and Rog to pass me on the brakes as it is for Josh.

"I wanted to at least lead going into the last lap and see what happens," Hayes continued, "I thought I threw it all away when I ran wide into five. I thought Josh was going to squirt up the inside of me, but I was able to get it stood up and on the fat part of the tire to squirt out of there."

With his win and second-place finish on the day, Beaubier extended his championship points lead to 25 points (a race win pays 25 points) over Hayes, 253-228, with second, third and fourth separated by just two points. Elias is third with 227 points and Hayden is fourth with 226.

Fifth place overall went to Bazzaz Superstock 1000 class winner Josh Herrin, the Wheels In Motion/Meen Motorsports rider earning his sixth win of the season and his fifth in a row. Herrin now leads the Superstock 1000 title chase by 42 points over Bobby Fong, 268-226. Claudio Corti is third with 218 points.

Herrin barely bested Yamalube/Westby Racing's Mathew Scholtz, the South African racing to sixth overall and second in class in his debut for the team. Those two were just fractions ahead of TOBC Racing's Danny Eslick, the Oklahoman third in class. 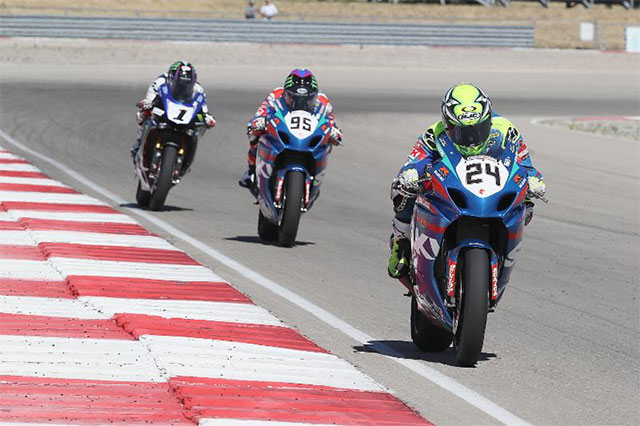 Toni Elias (24) won race two in Utah, besting Beaubier (1) and Roger Hayden (1). Credit: Brian J Nelson
A normally cheerful Elias was an irritable Elias even with a three hour cooling-off period as he started the second of two races. He took his anger out on the field, taking over the lead when Hayes ran off the track on the second lap and leading the majority of the way. Hayes would drop back to 16th but would recover to finish fourth by the end of the race.

Though he did most of the leading, Elias was never alone and both Hayden and Beaubier stuck their noses in on multiple occasions. Elias, though, was better when he needed to be and he beat Beaubier to the line by .120 of a second.

"I win, but I am still very angry," Elias said. "For two hours after the first race I was completely angry because we work well this weekend. The first lap, no grip, the second lap, no grip. I tried my best but it was impossible. I couldn't do anything and I had to accept finishing fourth."

For race two, Elias had grip and it made all the difference in the world.

"We put new tires on and the bike was working perfect again," Elias said of race two. "These guys are riding really strong and were pushing a lot, but we could win this race. But today was a day to reduce the gap of the championship and we lost points. We lost six or seven points. I am happy for the victory and also for my team, but I am not happy."

Hayden did all he could on the day and ended up a close third in both races.

"The crew made a couple of little changes between races and it was definitely a little better so I have to thank them," Hayden said. "Toni was stronger than me in a couple of spots and I was better in the last section. I wanted to lead the last lap. I got a good run on him and almost got under him and Cameron got by both of us and I lost the front end a little bit on the brakes. It was just a seesaw on the last lap with everyone just going for it. I would have liked to have done better, but we got third today. We got beat."

With Hayes knifing his way through the field to finish fourth, fifth place went to Gagne, the Californian showing significant improvement in what was his best result since the New Jersey Motorsports Park round at the end of April.

Herrin was sixth and again on top of the podium in the Bazzaz Superstock 1000 class, the Meen Motorsports rider taking his sixth win in a row and his seventh of the season. Eslick was right with Herrin at the finish to earn seventh overall and second in class with Scholtz putting the Westby bike on the podium for the second time on the day in eighth/third.

Fong and Morais rounded out the top 10 finishers in race two.