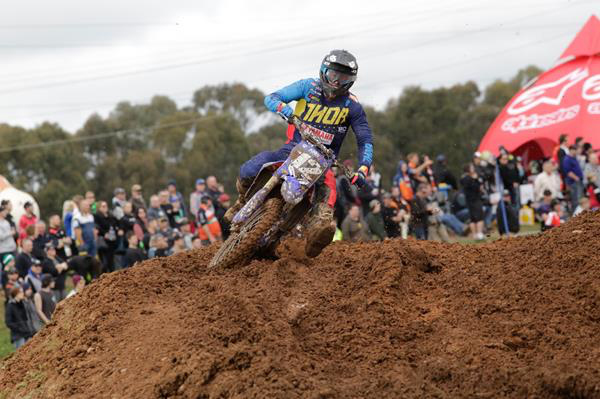 DPH Motorsport‰Ûªs Yamaha rider Jed Beaton has secured his second consecutive round win, and been awarded with the Motul MX2 championship red plate, after a fiery Round 8 of the Motul MX Nationals at Shepparton today.

There was excitement from the minute bikes hit the circuit, and in traditional Victorian weather conditions this morning, the Motul MX2 class were the first riders to brave the cold and hit the track for their practice and qualifying session.

With 15 minutes to qualify, it was Husqvarna Australia‰Ûªs Nathan Crawford who put down the fastest lap time with a 1:37.717, 1.3 seconds faster than KTM‰Ûªs Caleb Ward, followed by Davey Motorsport‰Ûªs Jayden Rykers who concluded the session with third pick of the grid.

When the Motul MX2 class lined up for the first race of the day, thousands of fans watched on to see who would launch down the straight first, and when gates dropped it was KTM‰Ûªs Rykers who collected the first MXStore holeshot and moved in to the early race lead.

However, with vital championship points on the line, it took no time at all for DPH Motorsport‰Ûªs Beaton to take control of moto one, while Serco Yamaha‰Ûªs Wilson Todd followed suit, passing Rykers to move in to second position.

Red plate holder Crawford became the third rider to blow past Rykers and move up in to third position, and with a championship lead to defend, Crawford was not letting Beaton and Todd out of his sight. A notable absentee from the front of the pack was Ward ‰ÛÒ after three laps the KTM star was back in 10th position.

With four laps in the books, both Crawford and Todd began to close in on Beaton‰Ûªs lead, and with the lead group already heading in to lapped traffic, back markers added another dynamic to what was playing out between the bar banging trio.

But it was at the 12-minute mark that Todd made his move to the front, making a clean pass on Beaton in the top section of the track, relegating the DPH Motorsport rider to second position.

By the half way mark in moto one, Todd remained in control with the race lead, followed by Beaton, and Crawford, while Rykers continued to maintain fourth position, followed by Proformance Racing Team‰Ûªs Kale Makeham in fifth. Ward, who suffered a poor start had made his way in to sixth place, followed by Dylan Wills (Raceline Pirelli KTM) and Wade Hunter (Serco Yamaha).

With ten minutes remaining, Beaton began to feel the pressure of Crawford, who continued to edge closer and closer to his rear wheel, meaning any mistake at this point would prove critical to the overall championship ‰ÛÒ and by lap 13 things got aggressive.

Beaton break checked Crawford in a corner before the pair nearly came together over the finish line, but it was Crawford who made a pass stick, moving in to second position, leaving Beaton behind him.

With five minutes left to run, there was no change to positions, with Todd remaining out in front with only a minimal lead, followed by Crawford and Beaton in second and third.

However, in a huge twist of events, both Crawford and Todd were handed 15 second penalties for jumping under a yellow flag, which put Beaton in the lead with only one lap remaining.

And when the chequered flag flew, fans had been treated to an epic final lap, with Todd, Crawford, and Beaton all within striking distance of each other ‰ÛÒ However, it was Beaton who was awarded the victory from Todd and Crawford once penalties were applied.

Rykers and Ward completed the top five finishing positions, while Makeham and Wills were awarded with sixth and seventh places at the conclusion of the moto.

When race two kicked off, DPH Motorsport‰Ûªs Beaton once again launched out of the gate and in to the race lead, but this time Crawford was hot on his tail in second position, followed by Rykers in third.

After only two laps you could feel the tension in the air. A race win for Beaton in the final moto would see him the new red plate holder, making the last race of the day all that more critical.

With Ward on a charge, Beaton also began to come under fire from Ward‰Ûªs KTM machine, while Crawford continued not to let the lead pair out of his sight. However, by the time race two reached the halfway mark, Ward had gotten by Beaton to move in to the race lead, keeping spectators guessing as to who would emerge from the round as the red plate holder.

With ten minutes in the 20-minute moto remaining, Ward continued to lead from Beaton and Crawford, while Rykers remained consistent in fourth position, followed by Serco Yamaha‰Ûªs Todd in fifth.

As race two reached its final stages, Ward and Beaton had put significant ground in between themselves and third placed Crawford, providing the front pair with a clear track to allow the final battles unfold.

And despite Beaton‰Ûªs every effort to chase down Ward, it was Ward who crossed the finish line for the final time today victorious, followed by Beaton in second and Crawford in third.

But with 1,2 results, it was Beaton who was awarded not only the round victory at Shepparton but the Motul MX2 red plate for the second time this year, while second place on the podium was taken by Ward, followed by Crawford who collected third place at Round 8.

‰ÛÏI‰Ûªm really happy to finish with another round win here at Shepparton. The championship is coming down to the wire and we all want to win just as bad as each other now,‰Û