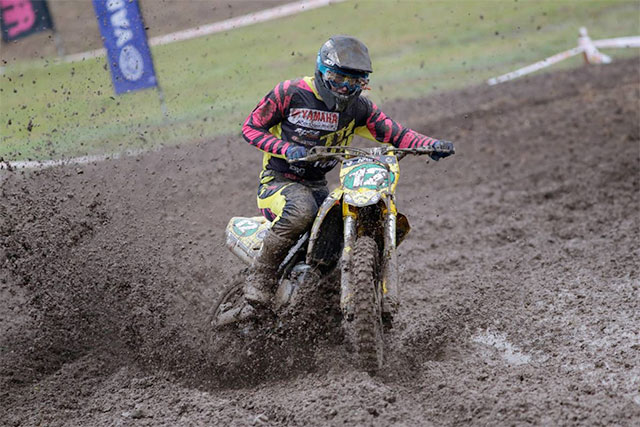 The Motul MX2 class were welcomed with muddy and wet conditions as the first class to hit the track this morning, and after a consistent down pour of rain throughout Saturday night, the wet track played havoc with the talented field.

After riders wrapped up their 15-minute qualifying session this morning, Serco Yamaha‰Ûªs Wilson Todd snatched up the first MX2 gate pick with a 2:03.066 lap time, followed by red plate holder Nathan Crawford (Husqvarna) and Hamish Harwood (KTM) who were awarded second and third picks of the grid after putting down their fastest qualifying laps.

When bikes lined up for moto one, the conditions remained wet and difficult, however when gates dropped it was game on, and it was Raceline Pirelli KTM‰Ûªs Dylan Wills who launched out of the gates to take the first MXStore hole shot of the day.

However, it took less than one lap for Husqvarna‰Ûªs Crawford to assert his authority on Wills, making his move in to the lead position by lap two, while in third place Proformance Racing‰Ûªs Kale Makeham showed impressive form ‰ÛÒ managing to navigating the slippery Green Park circuit.

Two notable absentees from the front of the field were DPH Motorsport‰Ûªs Beaton and KTM Motocross Racing Team‰Ûªs Caleb Ward, who were both back in 9th and 12th places ‰ÛÒ putting Crawford in a position where he could potentially stretch out his championship lead by a big margin.

With ten minutes run in moto one, Crawford continued to maintain his lead on Wills, while Makeham and third fastest qualifier Harwood trailed the front two riders by a huge ten seconds. Todd maintained fifth, followed by Davey Motorsport‰Ûªs Jayden Rykers in sixth.

However, an unexpected DNF mid-race from Yamaha mounted Todd paved the way for Beaton to make up significant ground, and with ten minutes to go, Beaton had passed four riders to move in to a solid fifth position.

As moto one for the Motul MX2 class reached it‰Ûªs closing stages, there had been little changes to the top five positions, with Crawford stretching out his lead to 24 seconds on Wills, followed by Harwood, Makeham and Beaton.

But just as riders looked as if they had settled in to their respective positions, Beaton began a late charge to the front, passing both Makeham and Harwood to move in to third position, where he also began to eye off the rear wheel of Wills.

And it was on the second last lap that DPH Motorsport‰Ûªs Beaton managed to make his move on Wills, slotting up in to second position, ensuring he snatched up close to maximum points despite a tough start to the race.

In what was a disappointing result for Wills, the KTM rider made a crucial mistake which saw him go down, dropping back to ninth despite holding a podium position for the majority of the race.

But when the chequered flag flew, there was no denying Crawford‰Ûªs outstanding performance ‰ÛÒ The Husqvarna rider taking an unchallenged first win for the day at Conondale, followed by Beaton, and KTM‰Ûªs Ward, who put in an impressive late charge from outside the top five up to third position. Harwood, and Makeham wrapped up the opening moto in fourth and fifth places respectively.

When race two got underway, Wills once again launched out of the gates to take his second holeshot for the day, however it was Beaton who after one lap had taken control of the race, followed by Rykers and Wills.

With Beaton out in front and Rykers hot on his tail, Wills, Makeham, Todd, Crawford and Ward became locked in to five-way battle for third position, keeping spectators on the edge of their seats.

By the time race two had reached the half way mark, Beaton had stretched out his lead on Rykers to an impressive eight seconds, while behind the front two, Wills continued to hold off Todd by only a small margin, followed by Crawford and Ward who held down fifth and sixth places respectively.

With only a three laps left in race two, Beaton was simply unstoppable out in front ‰ÛÒ continuing to put ground between himself and Rykers, and placing himself in a healthy position to take the final race win and the round victory. Meanwhile behind Rykers, Wills had once again dropped off the pace, allowing both Todd and Crawford to make passes on the KTM rider and slot in to third and fourth respectively.

But when the chequered flag flew for the final time, it was Beaton who had the crowd in applause, taking the final race victory by a huge margin, followed by Rykers who crossed the finish line in second, while Todd held on to redeem himself after this morning‰Ûªs DNF to finish in third.

With a second in race one, and a moto two victory, Beaton concluded the day with the Round 7 Motul MX2 overall, while Crawford‰Ûªs consistent 1, 4 results placed him second, followed by Rykers wrapped up the weekend in third overall. Crawford continues to hold the red plate, and leads the Motul MX2 Championship by 7 points with three rounds remaining.

‰ÛÏToday was a good day. I really want this championship, and like I said, I‰Ûªm going to do everything I can to get it. I‰Ûªve been working really hard with Ross (Beaton) over the past two weeks, and it‰Ûªs paid off today,‰Û