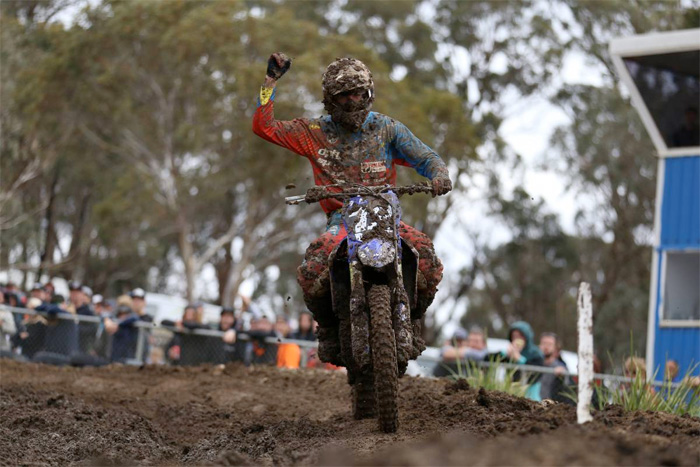 Despite challenging conditions, round three of the Motul MX Nationals proved to be a breakthrough outing for DPH Motorsport Yamaha‰Ûªs Jed Beaton at Broadford today, going undefeated across both motos and leaving as the new Motul MX2 points leader.

With round three marking the first ‰Û÷mud race‰Ûª for the Motul MX Nationals in two years, the MX2 championship was completely turned on it‰Ûªs head today, with no one expecting what played out across the two action packed races.

The Motul MX2 class were the first category to face the wet, muddy, track conditions at the State Motorcycle Complex this morning, and after severe storms ripped through during the night, qualifying was removed from the schedule with gate picks decided by championship standings.

When riders launched off the grid for moto one, the wet surface didn‰Ûªt hinder the likes of KTM mounted Jayden Rykers who snatched up the first MXstore hole shot for round three, and then shot off to an impressive lead. However, a small mistake on lap one by Rykers allowed Raceline Pirelli KTM‰Ûªs Dylan Wills to inherit the top spot, while NPE Monster Energy Kawasaki Racing Team‰Ûªs Jake Moss, and Nathan Crawford (Husqvarna) followed closely behind in third and fourth positions respectively.

After only a couple of laps, the muddy conditions meant that positions continued to change dramatically, but it was DPH Motorsport‰Ûªs Beaton who took advantage of other rider‰Ûªs misfortunes, to move in to the race lead ahead of Rykers, Crawford, Wills and CRF Honda Racing‰Ûªs Kyle Webster.

After four laps, series points leader Caleb Ward was a notable absentee from the front of the pack, the KTM mounted youngster continuing to circulate back in 12th position ‰ÛÒ appearing to struggle with the difficult Broadford track.

By the halfway mark in moto one, the mud proved to be an absolute equaliser, however it was Beaton who proved his skill in the wet and continued to lead the pack from Webster, who had moved up to second position, followed by Wills and Moss, while Crawford rounded out the top five placings.

As the moto reached its final stages, there was little change to the top positions - DPH Motorsport‰Ûªs Beaton appearing more and more comfortable in race lead, while CRF Honda Racing‰Ûªs Webster was having a stand out ride in second place ahead of Moss in third.

And the Motul MX2 riders were nothing short of relieved to see the chequered flag fly after a gruelling 30 minutes - Beaton capitalizing on the wet conditions aboard his Yamaha to secure his first race win for 2016, crossing the line more than ten seconds ahead of second place getter Webster, while Moss wrapped up the opening moto in third.

Crawford managed to race to a hard fought fourth place in moto one, while Western Australian Dean Porter rounded out the top five finishing standings. In a huge upset to the championship, red plate holder Ward was unable to finish the opening MX2 race, with bike problems forcing the Queenslander to DNF.

In race two, SD3 Husqvarna‰Ûªs Arbon got to a ripping start off the straight, however it wasn‰Ûªt long before Beaton once again stamped his authority on the Motul MX2 class, moving in to the race lead, relegating Arbon to second followed by Webster in third.

From there Beaton just got better and better - putting down his fastest time (2:06.725) on lap three, which saw him continue to break away from his fellow competitors.

With Beaton out in front, the focus then shifted to the remaining positions, and with second to seventh place separated by less than ten seconds, spectators were treated to a battle between, Arbon, Webster, Crawford, Moss, Serco Yamaha‰Ûªs Wade Hunter, and KTM‰Ûªs Rykers for the final top spots.

However, the battle was somewhat impeded by the significant lap traffic, and by the time race two reached the halfway mark, it was Arbon who maintained second position, followed by Webster in third, while Crawford and Hunter completed the top five.

When the Motul MX2 competitors received the last lap board for the final time, positions remained relatively unchanged, the only movement to placings being from Serco Yamaha‰Ûªs Hunter who managed to get by Crawford to slot in to fourth position.

And when race two was run and won for the Motul MX2 class, it was Beaton who proved he was unstoppable at Broadford, taking an emphatic second race win ahead of Arbon, who secured a consistent second place, while Webster wrapped up moto two in third.

With two wins, from two motos to his name, DPH Motorsport‰Ûªs Beaton went undefeated at round three, and as a result was awarded the overall win ahead of Webster and Arbon who wrapped up a tough round in second and third places respectively.

As well as an overall win to his name, Beaton emerged from round three of the Motul MX Nationals as the new MX2 series points leader, and will now run the prized red plate when the series heads to Murray Bridge in three weeks‰Ûª time.

‰ÛÏIt is so good to reward the team and also myself with the win at Broadford today. I‰Ûªve been working so hard for this and I can‰Ûªt believe it‰Ûªs finally happened,‰Û