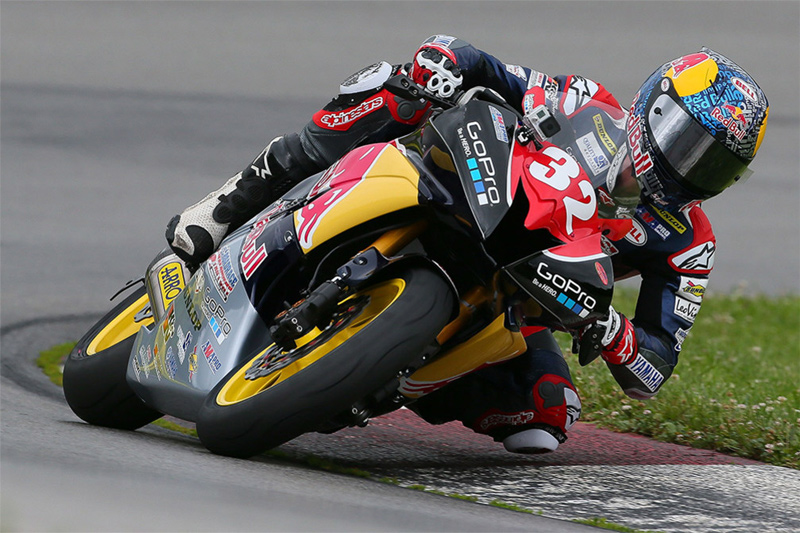 All eyes will be on Jake Gagne and Jake Lewis this weekend when the two face off in GoPro Daytona SportBike action at New Jersey Motorsports Park (NJMP) for the seventh and final round of the 2014 AMA Pro Road Racing season.

As if the No. 1 plate and the sensation of winning a major championship is not enough to strive for, GoPro has graciously agreed to offer up a $75,000 payout to the top ten finishers in GoPro Daytona SportBike's final point standings.

Heading into the finale, Gagne and Lewis are the only two competitors who have a realistic chance of earning the championship and claiming the $25,000 payout that goes along with it. Gagne (189 points) holds a slim lead over Lewis (182 points) for the top spot, but that could all change next weekend.

"My team and I are going to go into New Jersey with the same mentality that we go into every event with," said Gagne. "Our goal has always been to win races and stay consistent. As long as we continue to stay the course and win races, then the championships will come. If everything comes together next weekend and we get that championship, that would be awesome. I've been training a lot over the last month and have been doing everything I can to be fully ready for New Jersey."

Both Gagne and Lewis have had similar success, and lack thereof, at NJMP in the past. In 2013, both riders earned podiums in the first race but neither managed to break the top 15 in the second. Gagne, aboard his RoadRace Factory/Red Bull Yamaha YZF-R6 has found the podium in all but two races in 2014, while Lewis, aboard his MotoSport.com/Meen Yamaha YZF-R6 has won two of the last three races and is entering the season finale with an enormous amount of confidence.

"I love New Jersey," said Lewis. "It's a really fun track and I've had a lot of success there in the past. My team and I feel like we have nothing to lose right now being seven points back. We recently tested at Buttonwillow in California and everything felt great."

Tune into FansChoice.tv this weekend on Sept. 13-14, to find out who claims the coveted GoPro Daytona SportBike Championship. All four AMA Pro Road Racing classes will be on full display for the season finale in Millville, N.J.