Bastianini and Binder down to the wire 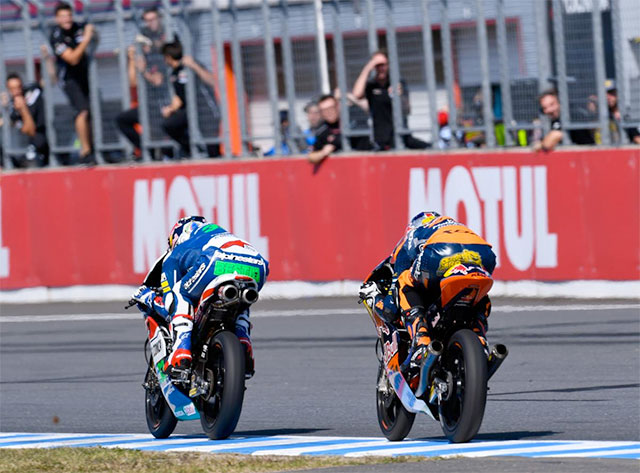 The Italian also takes back second in the Championship standings with the 25 point haul, as EG 0,0 rider Jorge Navarro failed to score. Hiroki Ono (Honda Team Asia) took his first career podium and Japan‰Ûªs first rostrum finish at Motegi since Hiroshi Aoyama in 2009 with a controlled ride to third as he fought off Italian duo Andrea Migno and Nicolo Bulega (Sky Racing Team VR46) - but was then disqualified for being under the minimum weight for bike and rider. Bulega therefore took the third place on his 17th birthday.

Despite a wheelie off the line, Migno managed to stay ahead from pole position as the lights went out ‰ÛÒ with new World Champion Binder and the South African‰Ûªs key 2016 rival Bastianini on the chase behind. An incident through Turn 1 then saw Jorge Navarro clip Leopard Racing‰Ûªs Joan Mir and lose control, with Gabriel Rodrigo (RBA Racing) and John McPhee (Peugeot MC Saxoprint) caught in the crossfire as Navarro slid out. With the three in the gravel trap, the Valencian‰Ûªs push to secure second in the Championship took a serious hit as key rival Bastianini disappeared in the front group and going on to take the win.

Attrition rates were high in the early stages of the race, with front end washouts causing some casualties. After the Turn 1 drama, one incident saw second EG 0,0 bike Aron Canet also slid out with 15 laps to go at Turn 9 ‰ÛÒ with Leopard Racing‰Ûªs Andrea Locatelli crashing just behind the Spaniard in a separate but simultaneous incident.

Binder was the leader of the front freight train, with Bastianini, Migno, Francesco Bagnaia (Pull&Bear Aspar Mahindra), Bulega and home hero Ono for company as the six riders made a break for it. After some more difficult races, Bagnaia was the superstar of Lap 1 as the Italian Mahindra rider moved up nine places from his starting position, putting himself right in contention.

Fabio Di Giannantonio (Gresini Racing Moto3) was the man on the chase at the head of the second group, with key rivals for the title Rookie of the Year Bulega ahead, and Joan Mir further back in P12. As the laps began to count down, Bagnaia ahead began to lose traction and move back slightly into the second group, as Bulega started to struggle keeping the pace of the frontrunners. Philipp Oettl (Schedl GP Racing) emerged from the mid pack to eventually lead that second group, as Bulega found some pace again to close back in and get out of the clutches of the German rider.

Binder seemed to have escaped at the front before Bastianini started to fight back with only a handful of laps to go, the two clear at the head of the race as Ono and Migno squabbled over the final spot on the podium. The pressure was on for the South African, with the Gresini machine behind getting closer and closer until the two were locked together on the final lap.

Drama on that final lap saw Migno attack Ono for the last place on the podium as the Japanese rider fought to stay ahead ‰ÛÒ and the Italian clipped the rear of the Honda Team Asia machine, then getting flipped over the highside. Ono escaped to take the third place finish at home, with Bulega crossing the line fourth but then moved up to third as Ono was disqualified. Migno was able to restart and crossed the line P25.

Ahead on track, a patient and measured Bastianini waited for Turn 11 to make a move on Binder and made it stick, just keeping it on the track through the tunnel - the final drag to the line seeing both bikes on the limit. Side-by-side, the Italian took the victory by millimetres, denying the South African his sixth win of the year and taking his second career victory, after Misano 2015.

Phillip Oettl took fifth over the line to head the second group, with Fabio Di Giannantonio in sixth to score good Championship points once again. Bagnaia, after his early race heroics, held on the take seventh ‰ÛÒ ahead of RW Racing GP BV rider Livio Loi, who had also been third fastest on Friday in a good weekend for the Belgian. Frenchman Fabio Quartararo (Leopard Racing) took a solid top ten finish in ninth, ahead of teammate and rookie Mir.

Wheel-to-wheel and high octane as always, Moto3 will return at Phillip Island Grand Prix Circuit next weekend ‰ÛÒ with Bastianini now the man to beat as he sets his sights on keeping P2 in the standings.

Main Photo: Bastianini and Binder had to be seperated by a photo finish