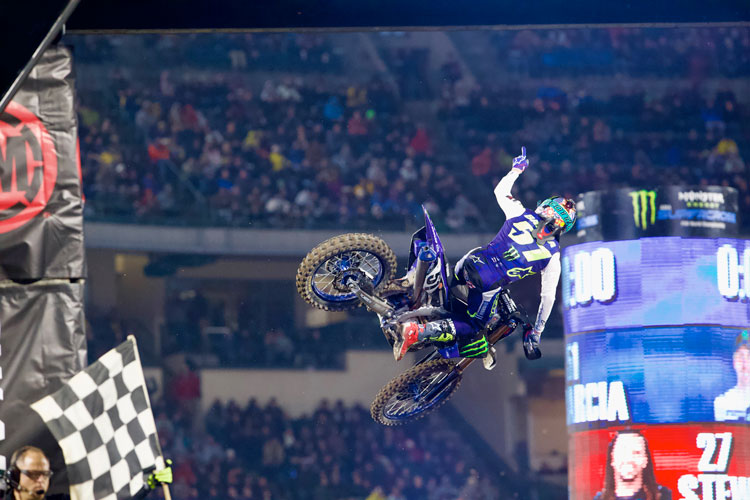 Justin Barcia. Photo: Feld
Justin Barcia has come out firing at the opening round of the 2019 Monster Energy AMA Supercross Championship by claiming the 450 main while Colt Nichols made it a Yamaha double by taking out the 250SX West Coast class at a soggy Angels Stadium in Anaheim California.

The Monster Energy Yamaha Factory Racing Team rider took eleven laps to reign in early leader Dean Wilson as the rain intensified during the twenty lap main. Wilson and Malcolm Stewart held sway for the first half of the race while the heavy hitters, such as Eli Tomac, Marvin Musquin, HRC's Ken Roczen and 450 class rookie Aaron Plessinger all battled in the top ten.


Wilson was impressive out front after taking the holeshot with Stewart in tow. Defending Champion Jason Anderson was in the mix early running as high as third. As the condition worsened though he slipped back through the field to what was a disappointing eventual fourteenth place!

Stewart made an attempt to pass Wilson but slid out in the difficult conditions; this allowed Ken Roczen through into second. Meanwhile, Barcia was closing the gap to the leaders. One by one he worked his way into the lead by lap eleven and would remain there for the rest of the journey.

Ken Roczen stayed solid in second and was never any real threat to Barcia while Eli Tomac overcame a dogged, Wilson and Stewart to settle into third for the rest of the journey. 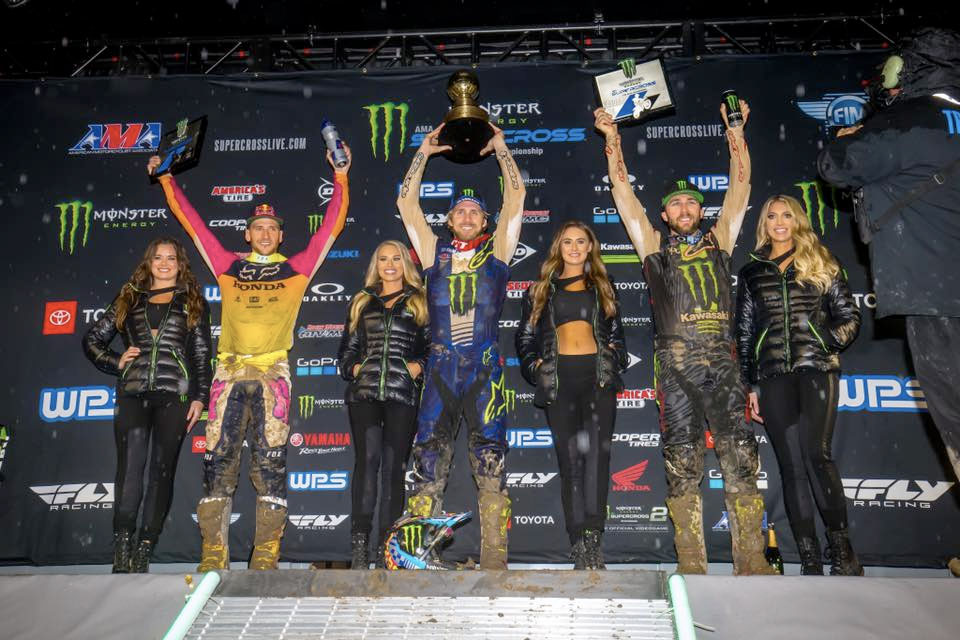 Justin Barcia (Middle), Ken Roczen (L) and Eli Tomac made up the first 450 podium of 2019. Photo: Feld
When the chequered flag flew after 20 laps, it was Barcia who took his third career win with Roczen second and Tomac third. Wilson and Stewart impressed finishing a torrid race with fourth for Wilson and seventh for Stewart.

"Anaheim 1 was an awesome day," Barcia said. "I had a lot of fun in practice, then going into the heat race it started to sprinkling a little. I didn‰Ûªt get the best start but made some good passes and got into the lead and won my heat race which was awesome, and it felt really good to get that first one out of the way at the first race.

"The main event it was really pouring down. It was looking tricky watching the 250 start so I definitely got a little excited and nervous and all those feelings you get at the first race. I got off to a pretty decent start and worked my way up to third by a little over half the race. I played it smart and tried to make no mistakes. One of the guys went down in front of me and then I was able to charge harder and catch the leader, make the pass and ride a smooth race to the win. For me this is incredible, I haven‰Ûªt won a 450 race in over six years so it's a pretty awesome feeling. I couldn‰Ûªt be much happier, I'm really excited to go to Phoenix. I just want to stay, smart, smooth, fast, consistent and focus on the championship plate," Barcia concluded.

Cooper Webb was impressive after being involved in a first turn crash with Chad Reed and climbing his way back to an amazing fifth place.

Reed also impressed, after having to make the main through the LCQ, finishing ninth in his first ride for the JGR Suzuki team. Read start in the main event was also a record eighteenth start at Anaheim 1, breaking Mike Larocco's long-held record of seventeen.

With light rain falling Nichols was in total control after grabbing the lead early in the fifteen lap race. Nichols eventually went on to record a 16-second win over his team-mate Ferrandis. Ferrandis spent most of the race battling with last years A1 winner Shane McElrath but ultimately withstood the pressure.

Australian Thomas Ravenhorst finished 12th in his 250 heat and then finished 8th in the LCQ, missing the main event. The results not showing his true form. He did run in a qualifying position for a few laps in the heat race and was on the cusp of qualifying through the LCQ until he dropped back in the final lap. 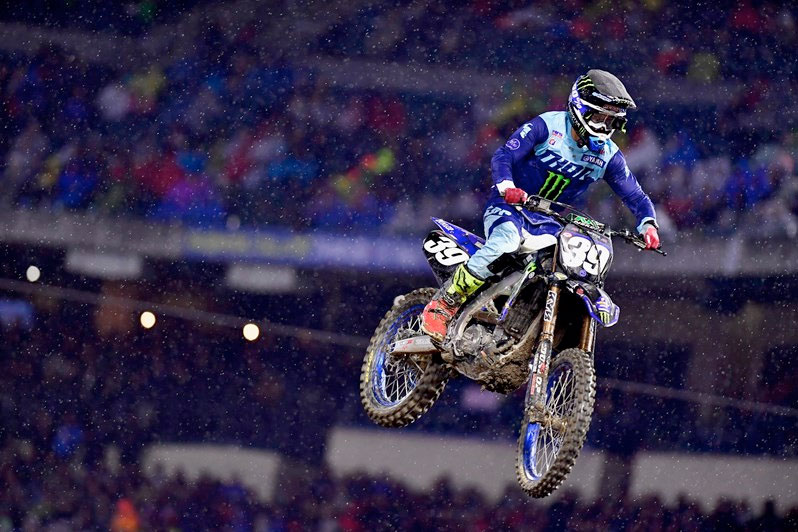