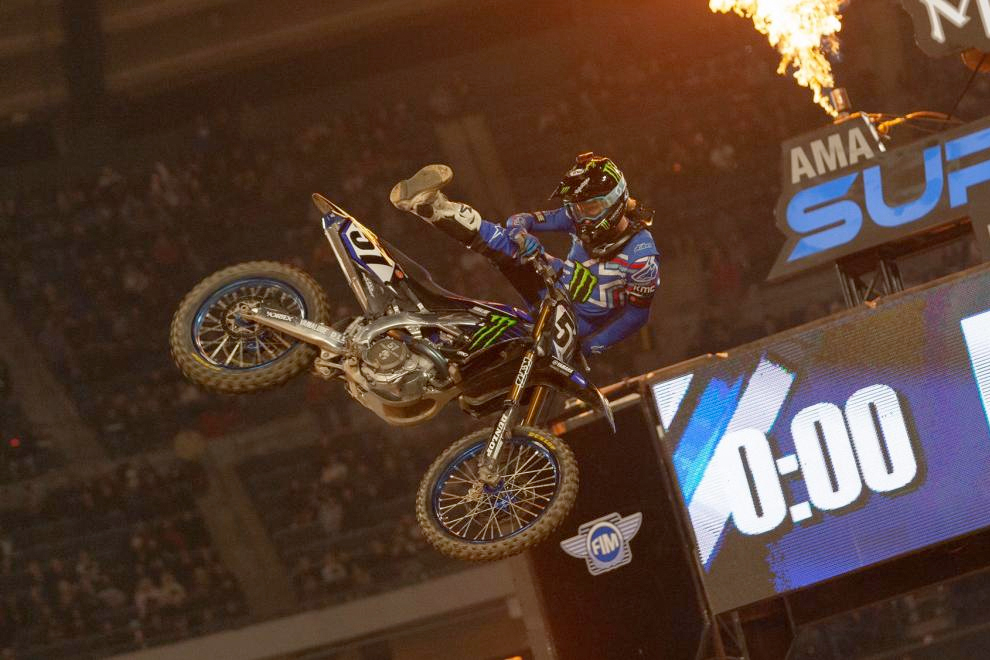 It was 450 rookie sensation Adam Cianciarulo who topped qualifying aboard his Monster Energy Kawasaki, leaving his experienced teammate, Eli Tomac some half a second behind in second position, with 2018 Champion Rockstar Husqvarna‰Ûªs Jason Anderson third fastest.


It was a tough session for reigning champion, Red Bull KTM‰Ûªs Cooper Webb who was suffering the effect of the flu, qualifying down in 15th position. At the same time, Australia‰Ûªs Chad Reed in his final season of full-time racing finished the session down in 22nd position.

When the gates dropped on the opening heat, it looked as though privateer Ryan Breece, had the holeshot in the bag, until he crashed in front of the field taking down both Monster Energy Yamaha‰Ûªs Aaron Plessinger along with Reed, with Plessinger looking as though he suffered a leg injury and forcing him to the LCQ. 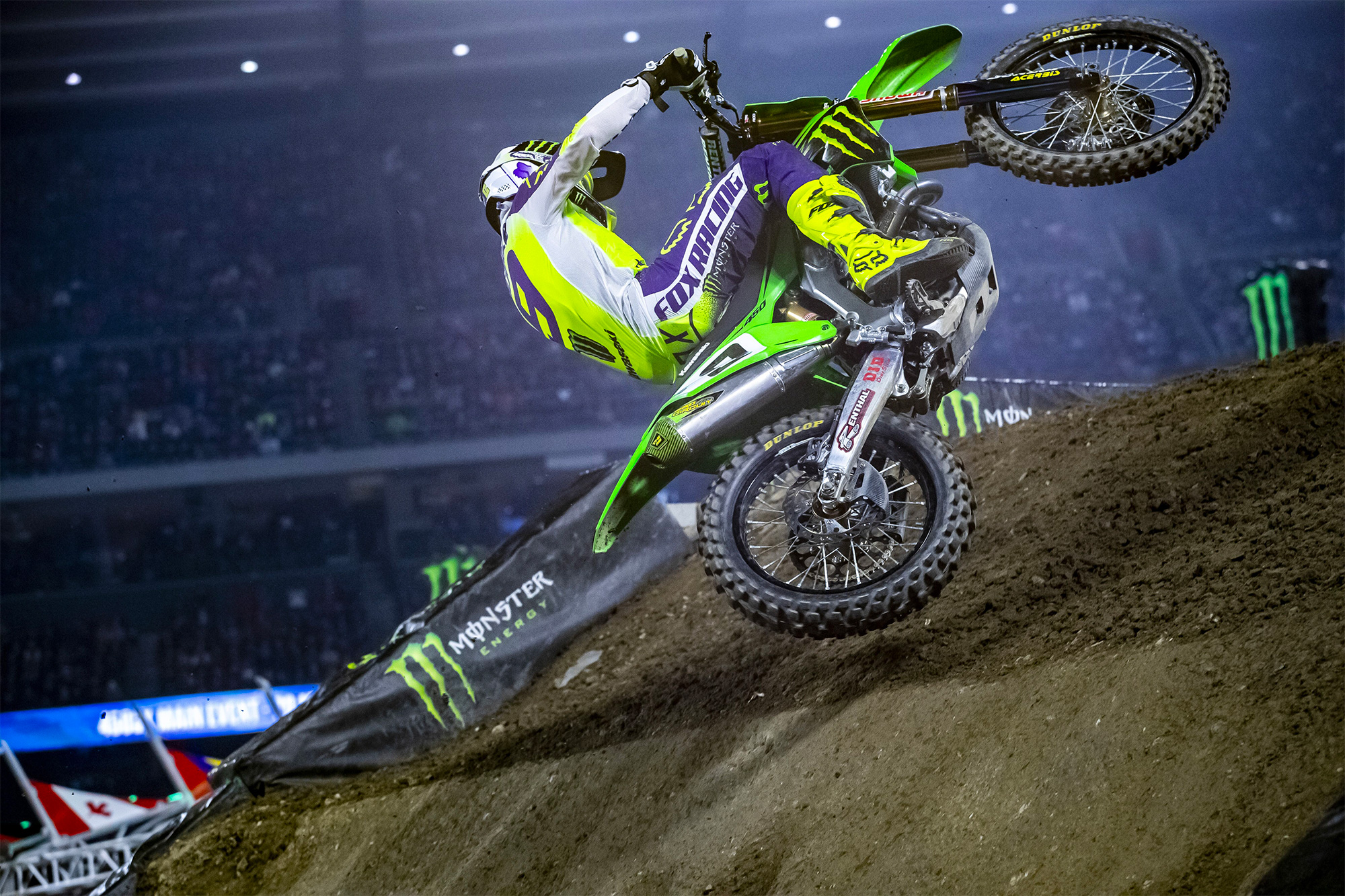 Adam Cianciarulo making his Monster Energy Supercross 450SX debut picked up right where he left off at the Monster Energy Cup, showing great speed all day long qualifying fastest and finishing in second place.
Out front, it was newly signed Factory Honda racer and current Australian Supercross champion, Justin Brayton leading the way, taking a wire to wire win, just ahead of teammate, Ken Roczen, while SmartTop Honda‰Ûªs Vince Friese made it an all Honda top three.

Tomac finished fourth after a forceful pass on Malcolm Stewart that left the SmartTop Honda rider picking up his bike.

Reed eventually finished 12th and headed to the LCQ in a bid to qualify for his 250th main event start.

While Tomac trying to work his way into the top three made a big mistake but was able to stay on the bike.

Zach Osborne, lead the way early in the second heat aboard his Rockstar Energy Husqvarna but was soon looking at the rear end of Justin Barcia‰Ûªs Monster Energy Yamaha, as last years A1 winner looked to repeat his perfect start to the year.

Barcia held firm to take the win ahead of Cianciarulo, with Webb fighting off the flu to round out the top three.

With a star-studded line up of riders in the LCQ, it was Osborne who crashed out of his heat race in a big way that lead through the first turn from Reed, with the duo going on to take a comfortable 1-2 result and giving Reed his 250th 450 main event start. 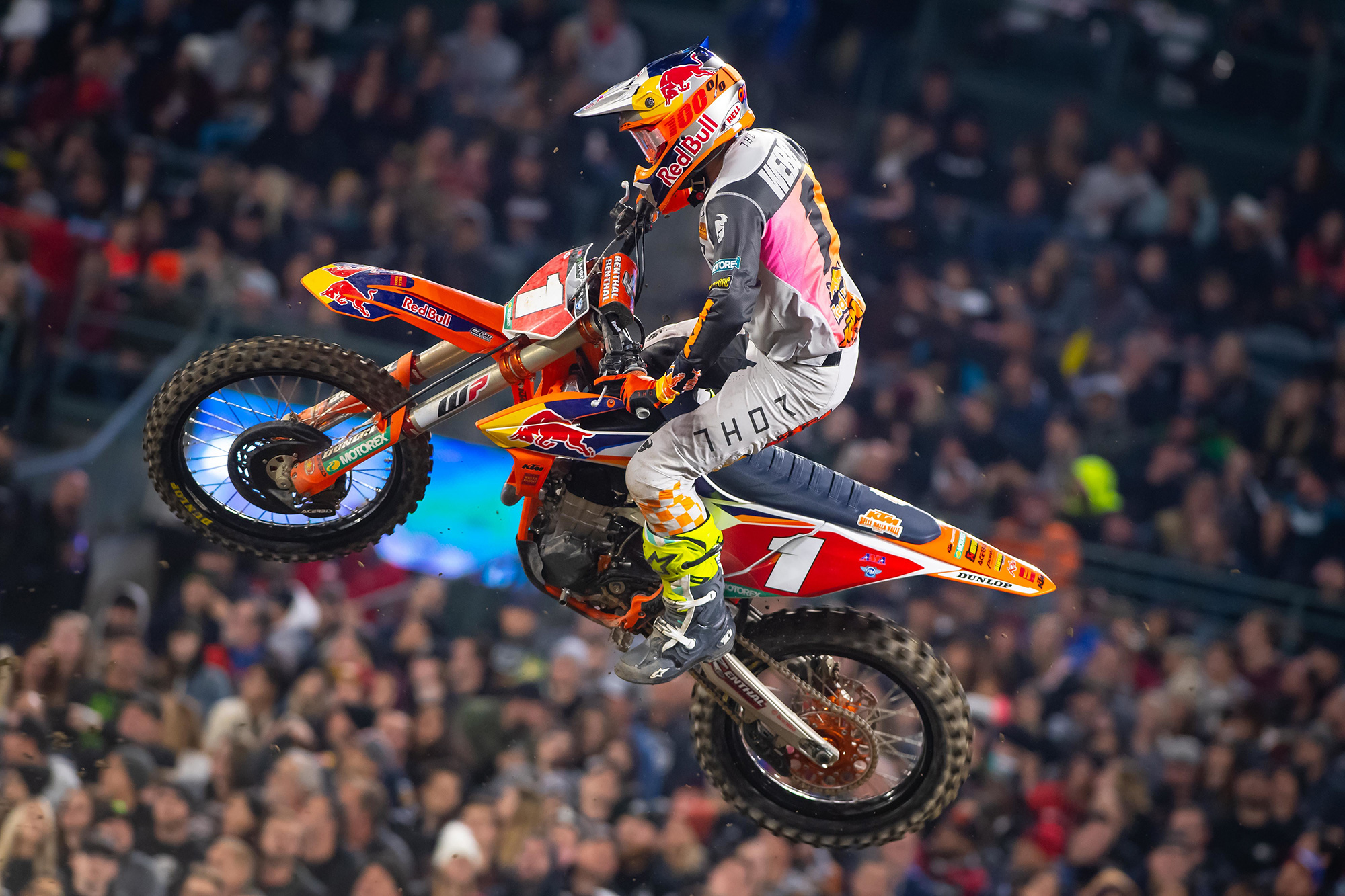 Defending champion Cooper Webb landed on the podium despite battling through a bout of sickness all weekend. Photo: Align Media
Behind them, the battle for the final two positions in the main event heated up and came down to the last lap battle between Plessinger, former 250 championship contender Tyler Bowers and Kyle Cunningham.

In the end, it was Bowers and Plessinger who proved to be the better riders as all three riders swapped positions in the final lap.

When the gates dropped for the night's main event, it was Friese who rocketed out of the gates to take the early lead but was quickly passed by Barcia, who led the field through the first lap, with Brayton holding down third.

Brayton and Cianciaulo both made their way quickly around Friese, with Cianciarulo then moving his way into second position where he trailed leader Bracia by just over two seconds.

With just over 12 minutes remaining in the race, Barcia made a mistake that looked to have cost him a chance of making it back to back A1 wins, was Cianciarulo captured the lead as Barcia returned to the track, quickly.

With the tables turned and AC now leading the way by just over two seconds, things took another turn with five minutes remaining in the race, with the Kawasaki rider making a mistake, narrowly avoiding crashing. Still, the error was enough to allow Barcia back through for the lead, a lead he would not relinquish, going on to cross the finish line ahead of AC by six seconds. 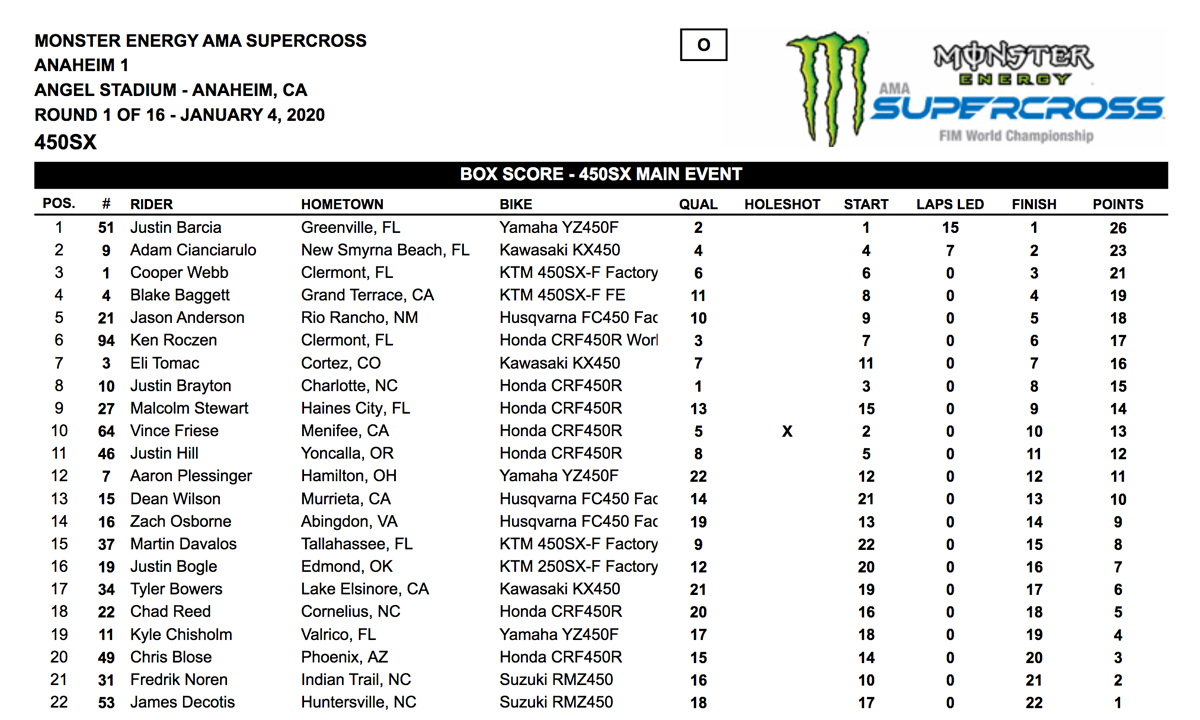 450 Round one result and Championship standings 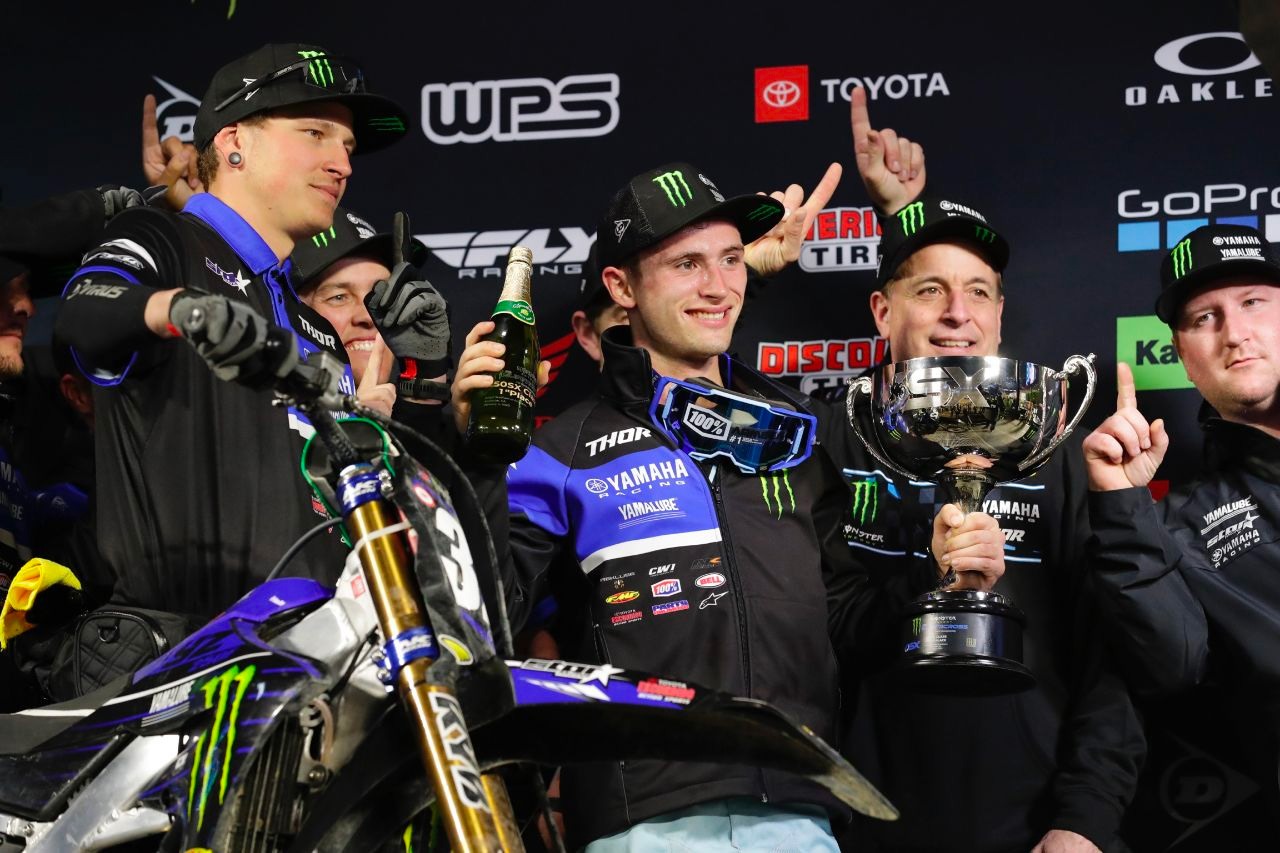 Justin Cooper got 2020 off to the perfect start with a solid win in the 250SX class.
In the 250 west division, it was JGR Suzuki‰Ûªs Alex Martin who grabbed the first holeshot of the evening but was quickly passed by Monster Energy Yamaha‰Ûªs Justin Cooper for the lead.

Monster Energy Pro Circuit‰Ûªs Austin Forkner then took his turn out front, until Cooper made an aggressive pass to recapture the lead and going on to win.

It looked as though all three Australian riders in the opening heat would qualify through to the main event, until Aaron Tanti got caught up along with multiple other riders, pushing him well back through the field to finish in 15th.

Jett Lawrence who also got tangled up momentarily was able to recover and work his way forward to finish 6th and was joined directly into the main event by Jay Wilson who finished one spot further back in 7th.

In the second heat, it was Geiko Honda‰Ûªs Christian Craig who lead the field through the first turn; however, it was 2019 West champion Dylan Ferrandis who lead the field at the end of the opening lap, with Troy Lee Designs KTM racer Brandon Hartranft in third.


Monster Energy Yamaha‰Ûªs Ferrandis who topped qualifying earlier in the day rode the perfect race to take the win ahead of Craig, with Monster Energy Pro Circuit‰Ûªs Cameron Mcadoo rounding out the top three.

For Australia‰Ûªs Luke Clout racing for the Australian Penrite Honda team, he kicked started his American campaign with an excellent 5th place finish, sending him directly to the nights main event. At the same time, teammate and Australian championship contender Mitchell Oldenburg recovered from an early race crash to finish 8th and also to qualify for the night's main event.

The second Aussie in the field, Geran Stapleton finished back in 16th and joined Tanti in the LCQ.

Tanti looked as though he would easily qualify via the LCQ, comfortably sitting in second position early in the race behind Michael Mosiman, until he crashed heavily while jumping out of a turn and was collected mid-air by Castello, putting both riders out of the race.

Out front, Mosiman took the win ahead of Mitchell Falk and Logan Karnow, while Chris Howell made a forceful pass on Japanese racer Taiki Koga in the final turn to secure the last spot in the night's main event.

In the 250 West main event, it was Forkner who grabbed the holeshot but was quickly relegated back to second position by Cooper as the two went to battle for the win.

Forkner wasted no time retaking the race lead, with the two racers then staying within 1-2 seconds of each other for the majority of the race, while behind them, 2019 champion Ferrandis worked his way through the field, and by the halfway mark made a move around Craig for third.

Out front things were still tight between Forkner and Cooper when Forkner jumped into the tough blocks. While he was able to stay on the bike, it allowed Cooper to take over the lead and also Ferrandis to momentarily move into second, until Forkner cut the track while re-entering.

While Forkner did then slow up and allow Ferrandis to move back into second position, he was later penalised two positions.

Upfront Cooper held on to take a comfortable win ahead of his teammate, with Forkner crossing the line in third, then relegated back to 5th with his two-position penalty, giving Craig the official final spot on the podium.

‰ÛÏThe track was tough for all of us, and I was trying to pressure him into that mistake right there, I ended up being patient, and it worked out,‰Û 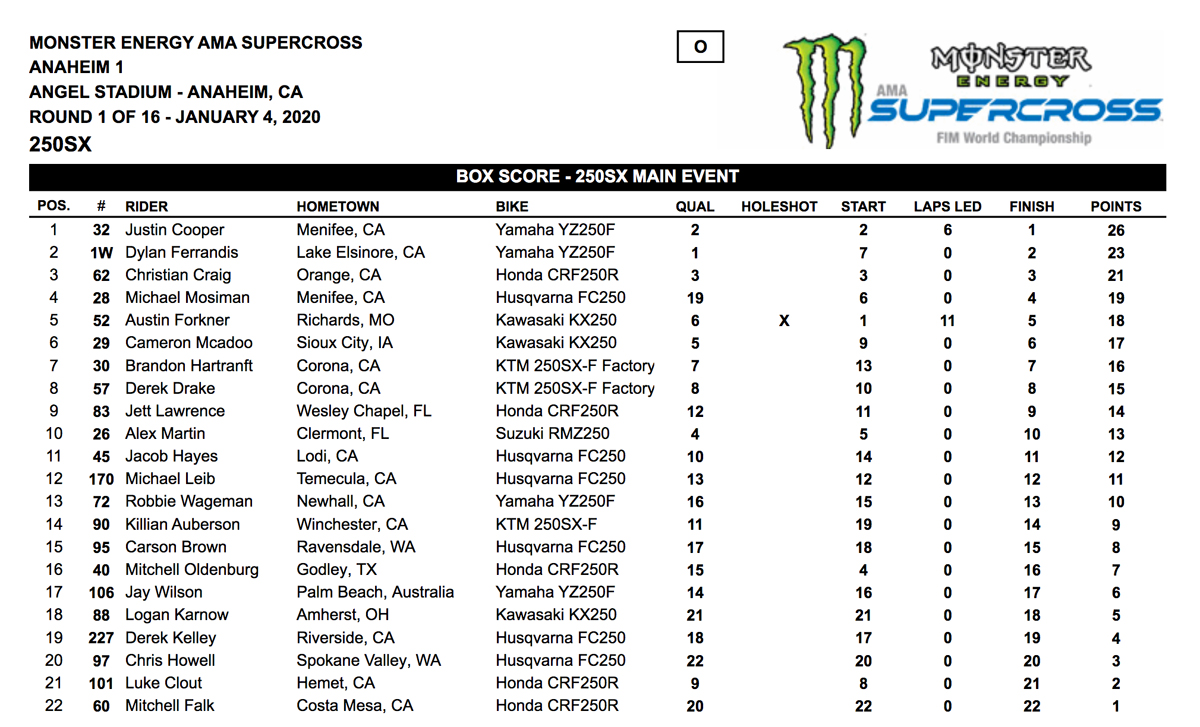 250 Round one result and Championship standings