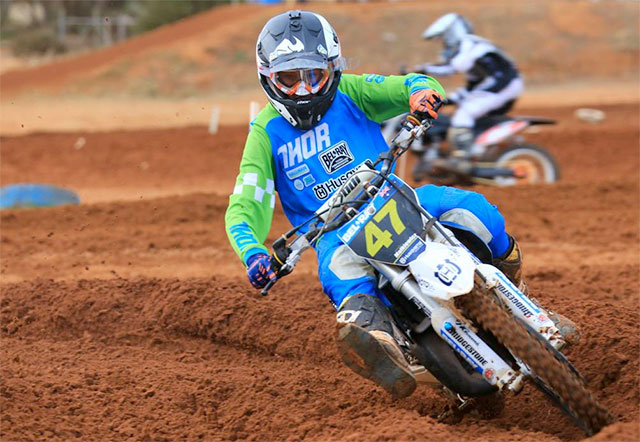 The talented pool of young Yamaha 85cc Cup riders took to the track for their second outing for 2016 yesterday, alongside Round four of the Motul MX Nationals at Murray Bridge in South Australia.

With the soft red dirt providing new ground for the Yamaha 85cc Cup competitors, when bikes hit the track for qualifying it was anyone‰Ûªs guess as to who would top the time sheets. However, it was once again Husqvarna‰Ûªs Bailey Malkiewicz who took the top spot in qualifying with a 1:56.110 lap time, awarding him first pick of the grid.

When race one kicked off for the Yamaha 85cc class, it took no time at all for Malkiewicz to move in to the race lead, however his lead was unexpectedly short lived, with KTM‰Ûªs Tyler Darby being handed the top spot followed by fellow KTM rider John Bova, after a mistake from Malkiewicz.

By the halfway point in race one, Darby continued to lead from Bova and Malkiewicz, while Zack Wright held down fourth place ahead of Jayden Rudd. Ricky Chalmers, Reece Crutch, Cooper Sheidow and Brandon Steel completed the top nine standings.

In a huge upset for Darby, a small crash over the finish line forced him to lose the lead, allowing Bova to move in to the top spot, followed by championship leader Malkiewicz in second, while Wright inherited third.

However, the action on track was still not yet over, with Malkiewicz moving in to the race lead in the closing stages of the race, where he would stay for the remainder of the moto. Finishing in second place was Bova, followed by Wright in third, while Rudd and Chalmers completed the top five finishing positions.

In race two, Darby looked to redeem himself after a difficult first moto, and redeem himself he did ‰ÛÒ Darby led from Malkiewicz from the minute the gates dropped, putting on an impressive performance for thousands of Motul MX Nationals spectators. Bova also looked to impress in the final 85cc Cup moto for the day, holding on to third position throughout the gruelling 15 minutes.

Despite Malkiewicz doing all that he could to apply the pressure on Darby for the race lead, Darby was untouchable out in front, while Bova, Wright and Chalmers all occupied positions inside the top five by the time the last lap board was shown.

It was on the final lap that Malkiewicz, put up one final challenge for the race two victory, but Darby‰Ûªs determination just couldn‰Ûªt be matched ‰ÛÒ Darby and his KTM machine crossing the finish line by only a bikes length from Malkiewicz, who wrapped up the final race in second position, followed by Bova who concluded moto two in third.

With the points from two races combined, it was Husqvarna mounted Malkiewicz who once again secured the Yamaha 85cc Cup round honours at Murray Bridge, while Bova‰Ûªs (KTM) consistent 2,3 finishes awarded him with second position on the overall podium. Despite a disappointing first moto, the final race win for the day placed Darby in third overall, in what was another exciting round for the 85cc Cup competitors.

‰ÛÏI‰Ûªm pretty happy to come away with another victory ‰ÛÒ two round wins in a row is a good achievement for me,‰Û