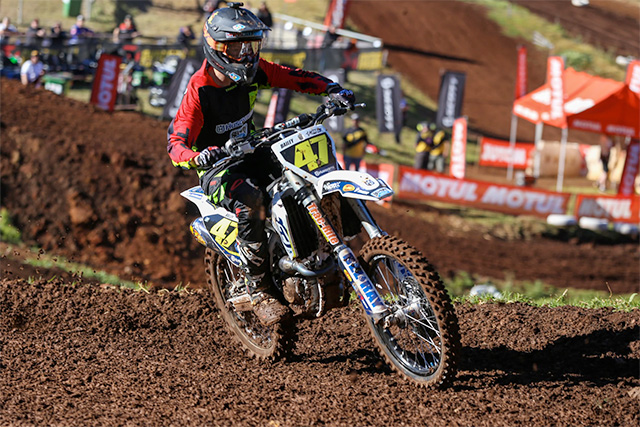 Round 9 of the 2017 MX Nationals series saw the third and final round of the Rising Star Rookies, and Malkiewicz entered the round with a seven-point lead after taking his Husqvarna FC250 to victory in the penultimate round at Horsham back in May.

After qualifying second-fastest, the Victorian junior rode to second place in the opening moto, opening up a comfortable buffer over title rival Regan Duffy.

He then took a comfortable seventh in the second moto to put the title to bed, finishing third on the day behind KTM Junior Team mates Mason Semmens and Duffy.

Malkiewicz will now turn his attention to the black sands of Coolum and the finale of the 125cc Junior Cup Championship ‰ÛÒ where the battle is a little more uphill.

The Husqvarna rider holds third place there, 21 points in arrears of Duffy and 9 shy of Semmens with a maximum 70 points up for grabs.

"Toowoomba was hilly and rough, but it was a fun track and I enjoyed it," Malkiewicz said, "Battling with those other guys was great, they were riding really well. It‰Ûªs nice to win in my first year on the 250. I knew I could do it, but at the start of the year I had a knee injury, so I couldn‰Ûªt run with the front two initially.

"But now my knee‰Ûªs alright, I can battle with them for the top positions. Yesterday I just needed to finish in front of Duffy in the first race, and then I could take a nine-point lead into the last race and just finish third behind those two. It was a bit of a shuffle in that last one; it was a hard, gnarly track and I made little mistakes.

"My bike was handling the conditions really well, and it got me two holeshots, which was awesome. I‰Ûªll go up to Coolum next weekend for the last 125 round. I lost a couple of points at that first round when I was injured but I might be able to get second overall, or maybe first if I‰Ûªm lucky.‰Û