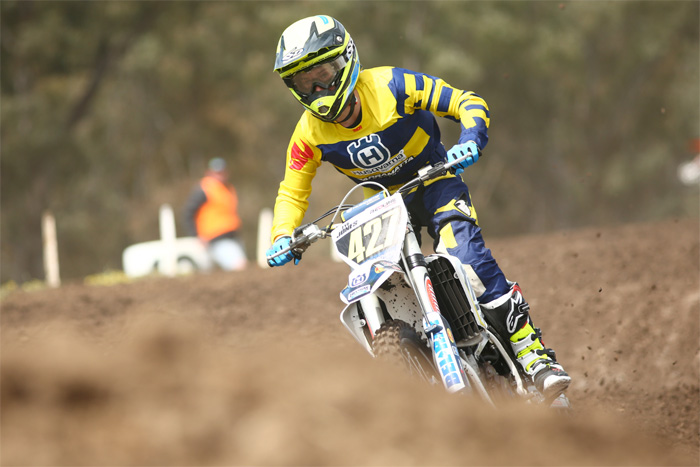 Husqvarna Junior Racing Team rider Bailey Malkiewicz will take the next big step in his racing career when he races in the SX2 category of the Australian Supercross Championship, less than a month after winning an Australian Junior Motocross Championship at Horsham in Victoria.

The Queenslander will debut in the SX2 category for this Saturday‰Ûªs third round of the Aussie supercross nationals at Virginia, in South Australia, aboard his Husqvarna FC 250.

Malkiewicz decided to join the senior ranks for the remainder of the series, after dominating the junior supercross race at the second round of the championship at Bacchus Marsh a fortnight ago.

The win was another in a successful 2017 racing season which has seen him win the Rising Star Rookies 250cc Championship of the 2017 MX Nationals, and more recently, an Aussie junior crown.

Malkiewicz was a force to be reckoned with at the week-long Australian Junior Motocross Championships, wrapping up the graduating Junior Lites 15 Years class using a 3-1-1 scorecard, aboard his Husqvarna FC 250.

Switching to his Husqvarna TC 125, the 15-year-old charged to second overall in the 125cc division with a race win, three runner-ups and a third-place finish to his name.

‰ÛÏThe plan is to go and race SX2 now for the rest of the championship." Malkiewicz explained. "I skipped round 1 while I was preparing for the Aussie juniors and had a fairly good win at round 2 which felt good, but, I want to go up.

"I‰Ûªve spent the whole year watching these boys race each other and I just want to be up there racing with them. I know they‰Ûªll be much stronger competitors, but I train pretty regularly with senior guys like Dylan Long and Callum Norton which has been great to show me how much I‰Ûªve improved and how much I need to improve.

"My bike has a really good setup for supercross and I feel good on it, so it should be fun. I think I can do well.‰Û