Back To Back Wins For Jason Anderson In San Diego 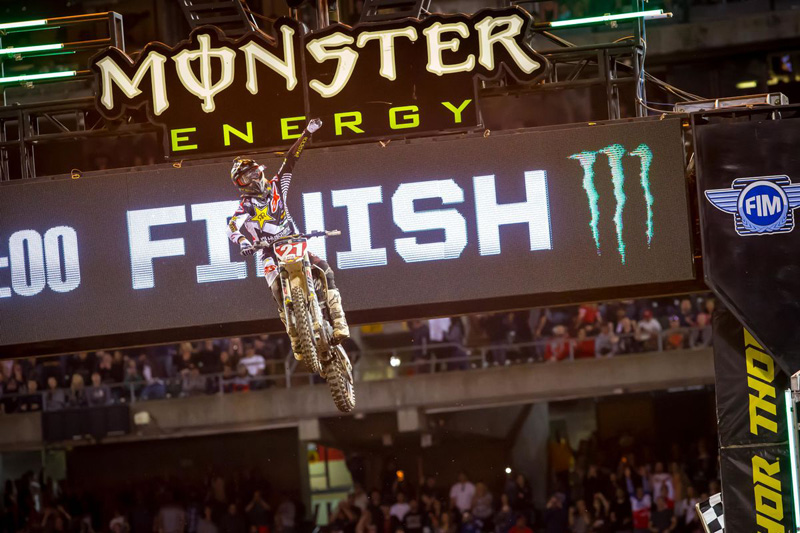 Rockstar Husqvarna‰Ûªs Jason Anderson has once again extended his Championship lead with back to back wins at the sixth round of the 2018 AMA Supercross Championship in San Diego.

Carnage ensued at the start of the 450 main event with a first turn pile up claiming Factory Honda‰Ûªs Ken Roczen, the Kawasaki pairing of Eli Tomac and Josh Grant along with Facotry Yamaha‰Ûªs Cooper Webb.

The crash seen Tomac pull out of the race, while Webb and Roczen remounted and quickly became entangled in a battle that would see the two riders coming together heavily, forcing both out of the race, Webb with bike issues and Roczen nursing an injured right arm.

Out front it was Cole Seely leading the way with CR22‰Ûªs Chad Reed moving into second ahead of Factory KTM‰Ûªs Marvin Musquin and Monster Energy Yamaha‰Ûªs Justin Barcia and Anderson.

Anderson quickly made his way into second position and worked on closing in on Seely.

With Seven minutes left in the race, Anderson made his move, capturing the race lead and powering away to his 3rd round win of 2018.

Behind him, both Barcia and Seely moved backwards through the field, while the KTM duo of Musquin and Blake Bagget moved forward, with the Frenchman crossing the line in second position and Bagget in third.

Seely held on to finish fourth, with Factory KTM‰Ûªs Broc Tickle had his best result of the year in 5th.

Chad Reed who continues to recover from a press season injury rounded out the night with his best result of the year in 13th.

In the Championship standings, Jason Anderson now holds a 28 point lead over Barcia who finished tonight way back down in 8th after running in second position early in the race.

Cole Seely moved back into third position, seven points down on Barcia and four ahead of teammate Ken Roczen in 4th.
In the 250 West class it was Justin Hill who gave the Joe Gibbs Racing Suzuki team something to smile about with his maiden win of 2018.

Pro Circuits Joey Savatgy who was injured in a qualifying crash earlier in the day got out to the early lead when the gates dropped on the main event with team mate Adam Cianciarulo and Hill close in tow.

Cianciarulo, made quick work of his teammate taking the lead and set about opening up a handy gap up front.

Hill moved in to second position and slowly reeled in Cianciarulo. With just over two minutes remaining on the clock, Hill made his move and after a brief battle, cleared out to take a comfortable win ahead of Cianciarulo.

Geiko Honda‰Ûªs Chase Sexton finished in third position to grab his second podium result of the year, while Savatgy held on to fourth just ahead of Troy Lee Designs KTM rider Shane Mcelrath.

After winning the LCQ, the 51 Fifty Energy Yamaha rider gutted out the 15 minute plus one lap main event to finish in a very respectable 12th position.

Plessinger was on one of his usual bursts through he field after a bad start, moving his way to 5th position and in a position to pass Savatgy for fourth when he crashed in the whoops, remounting in seventh position where he eventually finished.

The 7th place result sees his championship lead cut down to just five points ahead of Savatgy as the West series heads into a five week break. 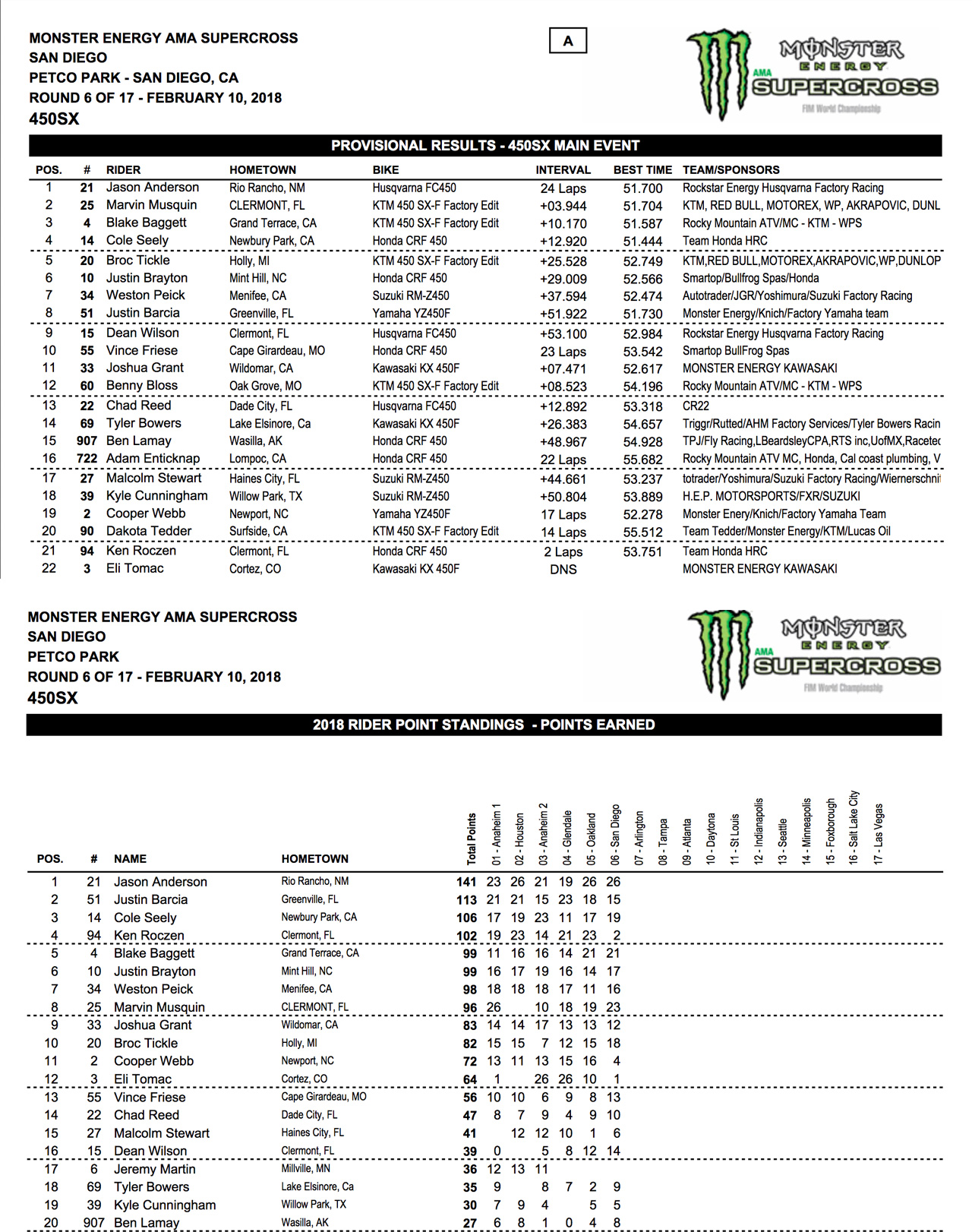 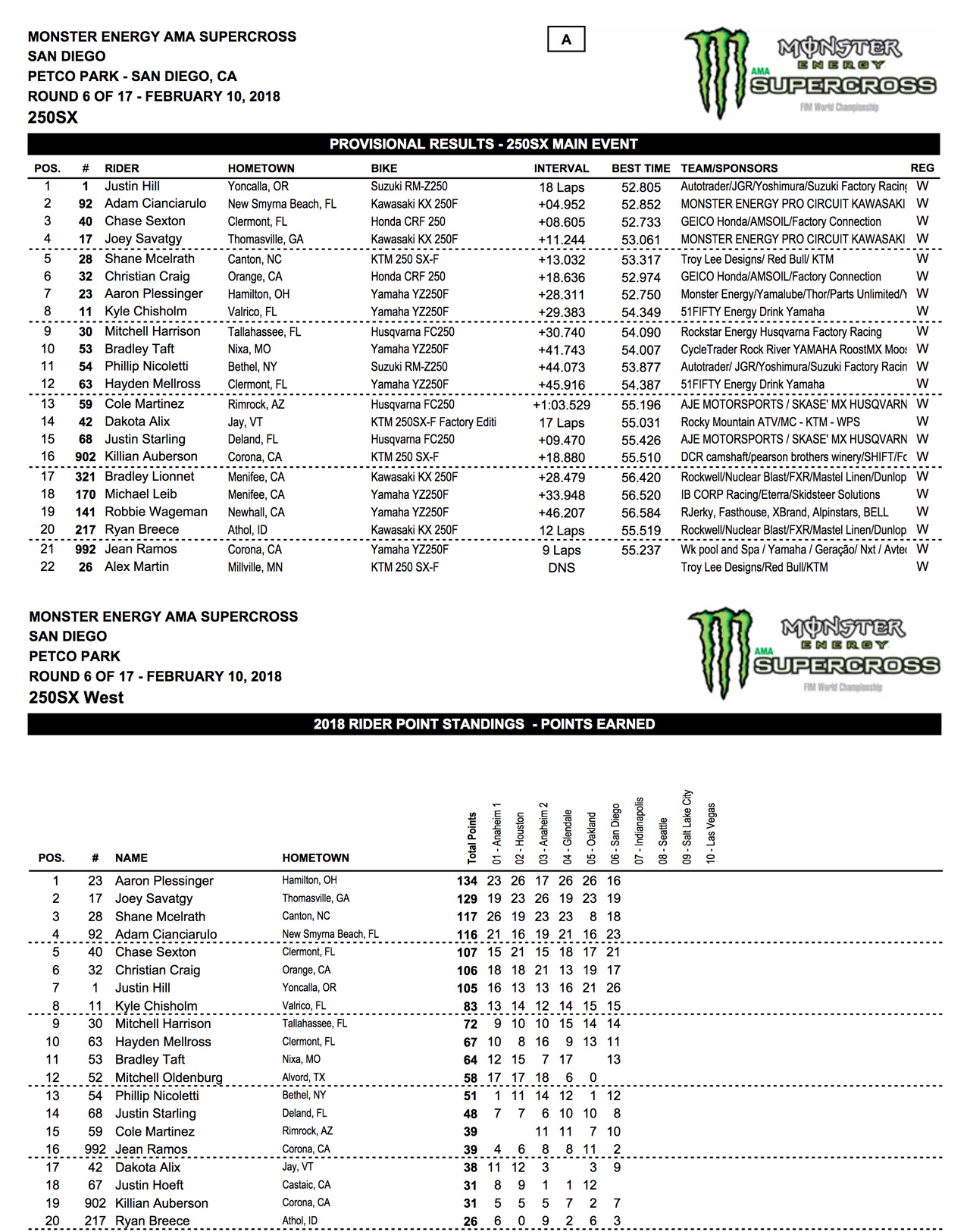 250 West Round Results and Championship Standings - Click to Enlarge