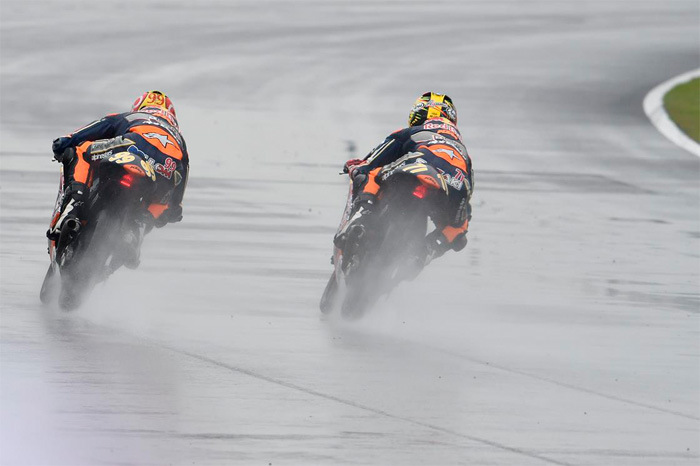 Ayumu Sasaki and Enzo Boulom were in a class of their own in terribly slippery conditions as they led Red Bull MotoGP Rookies Cup leader Bo Bendsneyder home in Race 2 at Silverstone.

The 14-year-old Japanese tailed the 18-year-old Frenchman all the way and then upped the pace with a lap to go and won by 3 seconds. Bendsneyder, the 16-year-old Dutchman rode alone in third after being forced to run wide when early leader Marc Garcia slid off in front of him.

Sasaki was third in Race 1 and again set off well from fourth on the grid along with Boulom to chase front row men Bendsneyder and Garcia. There was no RaÌ¼l FernÌÁndez as the third placed qualifier had slid off on one of the three sighting laps granted because there was no wet practice, indeed it was the first wet Rookies Cup running this year.

Garcia jumped into the lead but the 15-year-old Spaniard slid off on the first lap and took Bendsneyder wide. Boulom took up the lead with Sasaki on his tail. The pair pulled steadily away while Bendsneyder worked his way back into a distant third.

Sasaki had no interest in leading.

‰ÛÏIt wasn't easy, at first I didn't have a good pace and rhythm, I really had to follow Enzo. He was doing a good job and pulled us away. I could build my confidence and then in the end I knew I could go quicker.‰Û