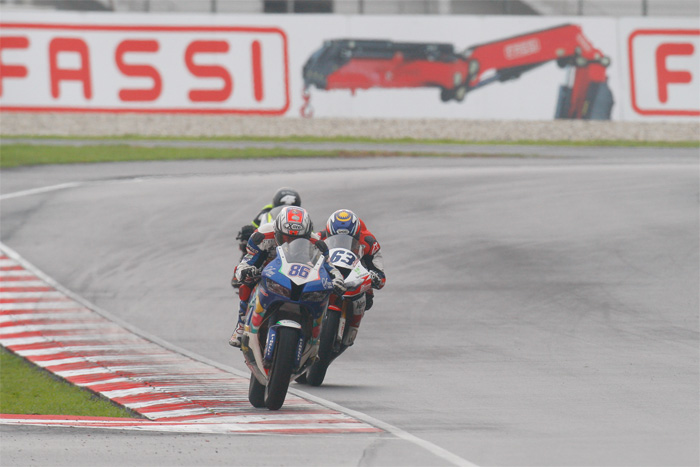 Local rider Zulfahmi Khairuddin kept raucous home fans on their feet at Sepang International Circuit in Malaysia, as the WorldSSP rookie went from his P5 grid slot to both lead the race and challenge for the victory on the last lap.

On the final corner, Fahmi just lost out to Ayrton Badovini, as the Italian managed to cut back on the inside to beat the Malaysian over the line by a whisker. GRT rider Gino Rea, after good pace all weekend, made good on his grid position after initially leading and completed the podium in P3.

In a Race postponed until after WorldSBK due to weather conditions at a rainy Sepang, it was British GRT rider Gino Rea who got the best start, rocketing away into the lead in front of reigning Champion Kenan Sofuoglu. The Turk‰Ûªs teammate Randy Krummenacher lost ground in the first lap to cross the line tenth after Lap 1, with local hero Zulfahmi Khairuddin making up places from P5 on the grid to duel with Sofuoglu and close down on then race leader Gino Rea.

The new asphalt at Sepang, especially designed to help with the local climate, was drying out as home hero Khairuddin leapt through into the lead at the final corner on Lap 3 to head a WorldSSP race for the first time. The conditions mixed up the World Supersport grid for an exciting race of nervous apexes, with the home hero shining and new addition Ayrton Badovini taking an incredible win.

Honda‰Ûªs PJ Jacobsen got another good haul of points in P4 as the American kept cool under pressure, and was the lead rider in the group of key Championship rivals. Reigning Champion and points leader Kenan Sofuoglu suffered more in the conditions than his pace in the dry had shown, crossing the line in P6 as wet weather specialist and Assen winner Kyle Smith took his CIA Landlord Insurance Honda into the top 5 and past the Turk in the closing stages.

MV Agusta Reparto Corse title hopeful Jules Cluzel took a good amount of points in P7, just ahead of WorldSSP rookie and Sofuoglu‰Ûªs teammate Randy Krummenacher as the two men fight to catch the Turkish points leader in the title standings. Alex Baldolini had a solid ride for a top ten finish in P9, as fellow Italian Federico Caricasulo closed out the top ten to gain another good finish in his rookie year.

WorldSSP will be back on track at Donington Park in two weeks time, for Round 7 of the 2016 Championship. 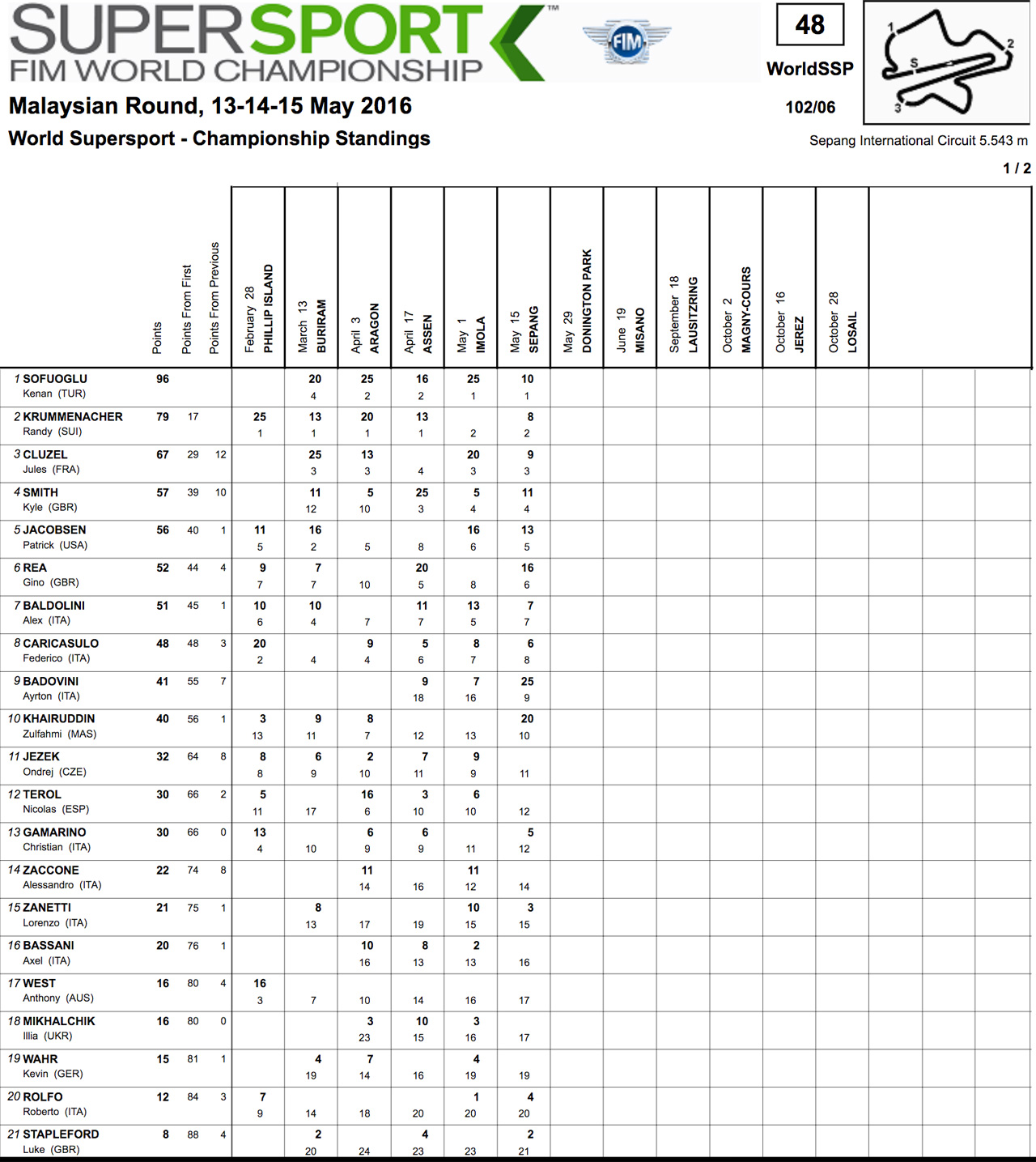 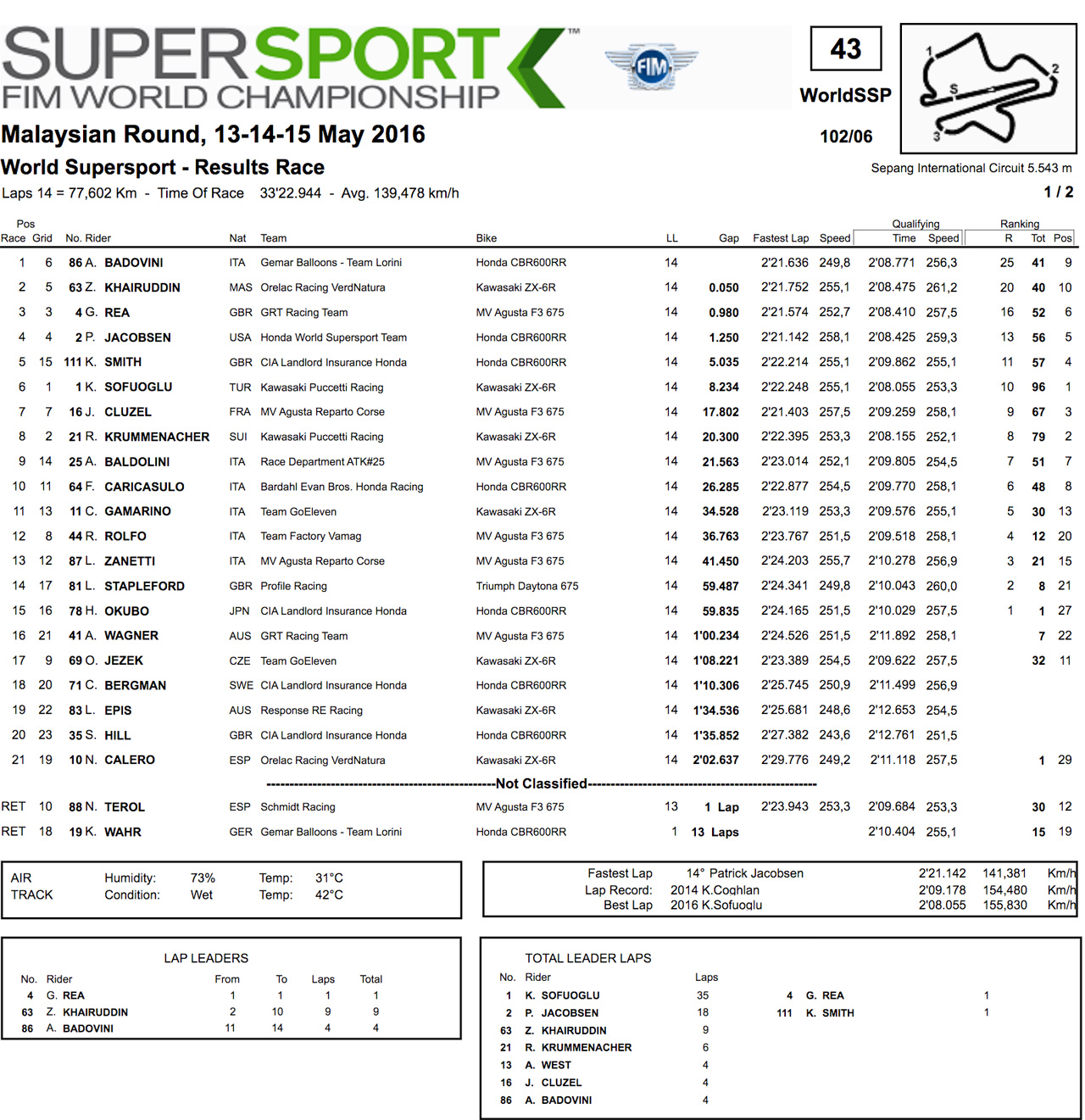