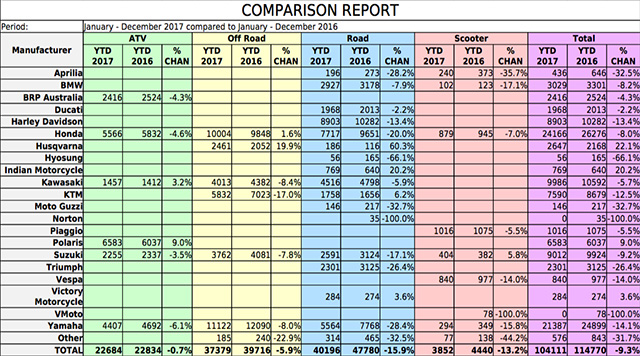 Australia‰Ûªs motorcycle and ATV/SSV market fell 9.3 percent in 2017 although total industry sales stayed above 100,000 for the full calendar year.

The 2017 market remained relatively steady in terms of its composition with road bikes remaining the most popular category and comprising 38.6 per cent of the market. Off-road bikes took a 35.9 per cent share, ATV/SSVs accounted for 21.8 per cent of total sales, and scooters just 3.7 per cent.

Road bike sales nationally reduced by 15.9 per cent on the 2016 result. Harley-Davidson came in as leader of the pack, ahead of Honda, and with Yamaha in third. Husqvarna, Victory, Indian and KTM all saw increased sales in 2017 compared with 2016.

The ATV/SSV segment grew its share of the total motorcycle market (from 19.9% in 2016 to 21.8% in 2017) and was less affected by the general decline, with volumes falling across the segment by only 0.7 per cent on last year. Polaris was the overall 2017 leader with Honda in second place and Yamaha third. Both Polaris and Kawasaki posted increases in overall sales for the year.

In the shrinking scooter segment (which only accounts for 3.7% of total sales), Piaggio was the leader, followed by Honda, and Vespa in third. The only brand to see increased sales in this segment was Suzuki (+5.8%).