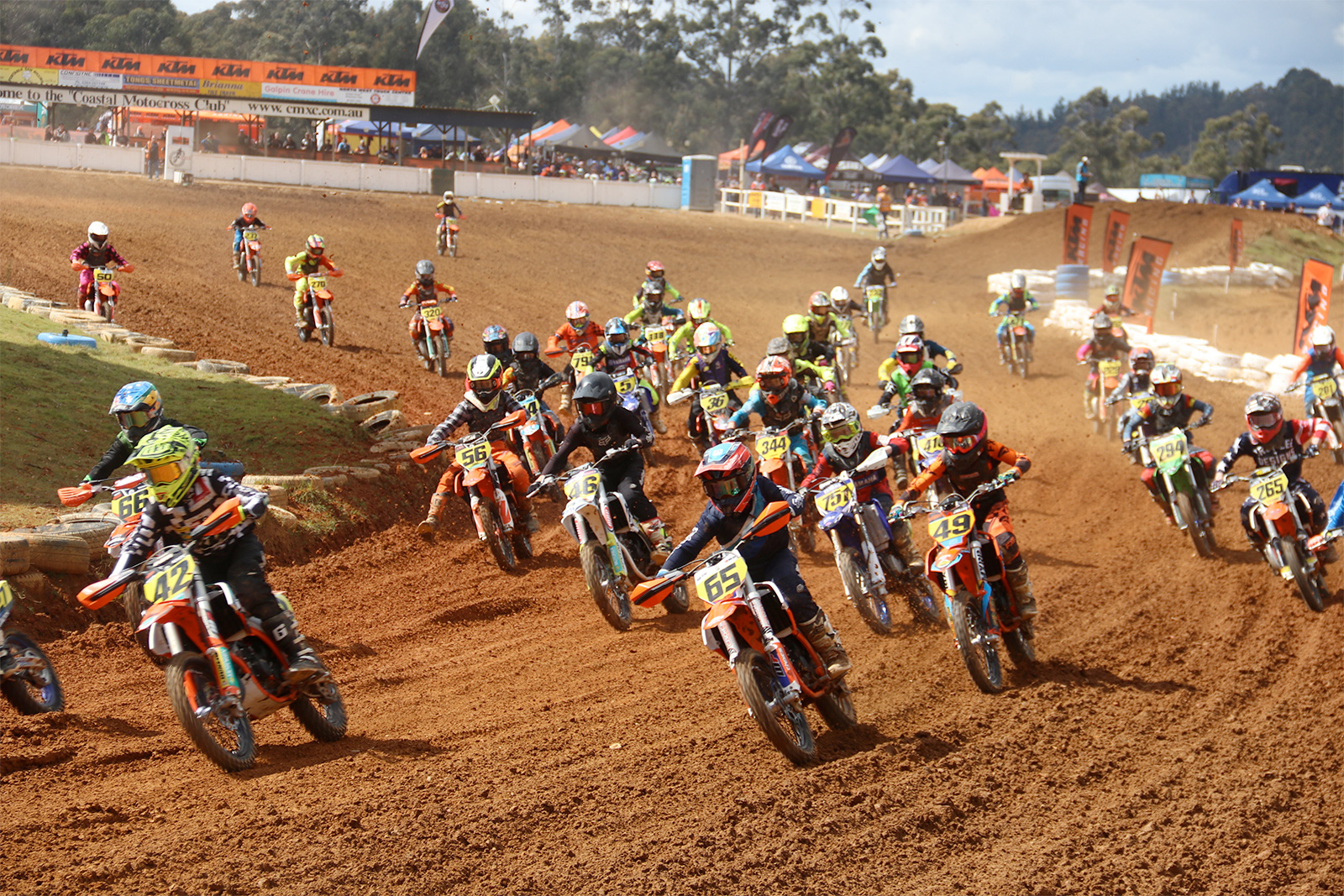 Photo courtesy of Sharon Wellard Photography
Friday marked the penultimate day of the 2018 Australian Junior Motocross Championship (AJMX) and the battles were heating up throughout the day.


It‰Ûªs all down to the wire tomorrow as 13 class titles will be decided during the final day of the championship.

Final 3:
It was a tight battle amongst the top three in the 65cc 11-U12 Years category, but it was Seth Burchell from New South Wales who topped the third moto. Tasmanian, Angus Pearce and Jake Cannon (QLD) passed the chequers just over a second apart, Jet Alsop (QLD) and Billy Pearsall (VIC) rounded out the top five.

Final 3:
Western Australia‰Ûªs Regan Duffy charged through to another victory in the older age group 125cc division, putting on yet another commanding display, with a 27 second victory. South Australian, Kai Newbold took second class honours after a tough battle with the chasing pack. Noah Ferguson of Queensland secured third, as fourth and fifth was awarded to Hugh Roache (VIC) and George Knight (VIC).

Final 4:
It was a dramatic moto, as one of the title favourites, Regan Duffy (WA) crashed out. Duffy has been in sensational form for the KTM Team and this could throw the Championship wide open. Taking a comfortable victory was Tye Jones (QLD), with Corben Weinert (WA) in third. Kai Newbold (SA) and Riley Findlay (NSW) took fourth and fifth.

Final 3:
The third final of the younger group of Junior Lites riders was won by only a 2.687 second gap by Levi Rogers of Queensland after coming under significant pressure from Alex Larwood from South Australia. A further 24 seconds behind was Kipp Adams (VIC) in third. Blake Hollis (NSW) pushed his way into fourth ahead of Ricky Chalmers (NSW).

Final 3:
The third final was all about the battle between the riders with the letter ‰Û÷K‰Ûª in their names. Ky Woods of New South Wales reigned victorious, defeating Western Australian favourite Kayden Minear by a slender three seconds. Kayd Kingsford (NSW) sat further 2.714 seconds back in third, as Koby Hants (NSW) and Seth Shackleton (WA) concluded the best five.

Final 4:
Kayden Minear topped fellow Western Australian, Seth Shackleton in moto four, beating his championship rival by only 2.239 seconds. The gap back to Ky Woods (NSW) in third was significant, as much as 24 seconds. Koby Hantis (NSW) and Jack Deveson (NSW) finished in fourth and fifth.

Final 3:
Taylah McCutcheon (QLD) lodged another hard-fought performance in the Female Mini Lites class, against her rival Charli Cannon from Queensland. The difference separating the two was only 0.612 of a second! Tanesha Harnett (NSW) jumped to third, beating Taylor Thompson (NSW) and Jessica Robertson (VIC).

Final 3:
The pace was electric in the third final as Western Australian, Regan Duffy (WA) turned up the heat with the fastest lap of the 2018 AJMX so far, on route to victory. He managed to lap the track with a 1:49.795 which was over half a second faster than anyone else all week. His astounding pace awarded him a 17 second victory in front of Noah Ferguson (QLD) in second. Tye Jones (QLD) earned himself a top three finish, in front of Dante Hyam (NSW) and Ethan Ashmore (VIC).

Final 4:
The fourth final of the 125cc class of junior riders was won by Ricky Chalmers of New South Wales with a 6.612 second margin. Levi Rogers (QLD) maintained a consistent second for the length of the moto, followed by Alex Larwood (SA), who was further 28 seconds back. Dominic Walker (VIC) pushed his way into fourth ahead of Joe O‰ÛªDonnell (NSW).

Final 2:
In the second final of the small wheel Mini Lites class, Jet Alsop carried his imperious form throughout the moto, charging his way to a five-second victory. Fellow young gun, Kayden Minear slotted into second, as third through to fifth was completed by Seth Burchell, Kobe Drew and Byron Dennis.

Final 4:
Cooper Downing (QLD) soared to victory in final four of the 50cc Division 2 class, navigating the track with ease to lodge a 6.893 second win. Ryder Creeke of NSW settled for the runner-up spot ahead of Aden Oakland (QLD) in third, while Peter Wolfe (QLD) and Phoenix Blanchette (NSW) completed the first five.

Final 4:
In final four, Benny Novak (NSW) topped the race 2.356 seconds ahead of Reid Taylor (NSW), as Max Barrass (QLD) settled into a comfortable third. Bayley Clancy (NSW) charged through to fourth, while Joe O‰ÛªDonnell (NSW) of was a new addition to the top five.

Final 4:
In the younger age group 65cc division, Ryder Creeke (NSW) kept Cooper Ford (TAS) at bay for the duration of the race, storming home to a six-second win. As Ford was credited second, it was Jobe Dunne (VIC) in third, followed by Cooper Downing (QLD) and Phoenix Blanchette (NSW) in fourth and fifth respectively. 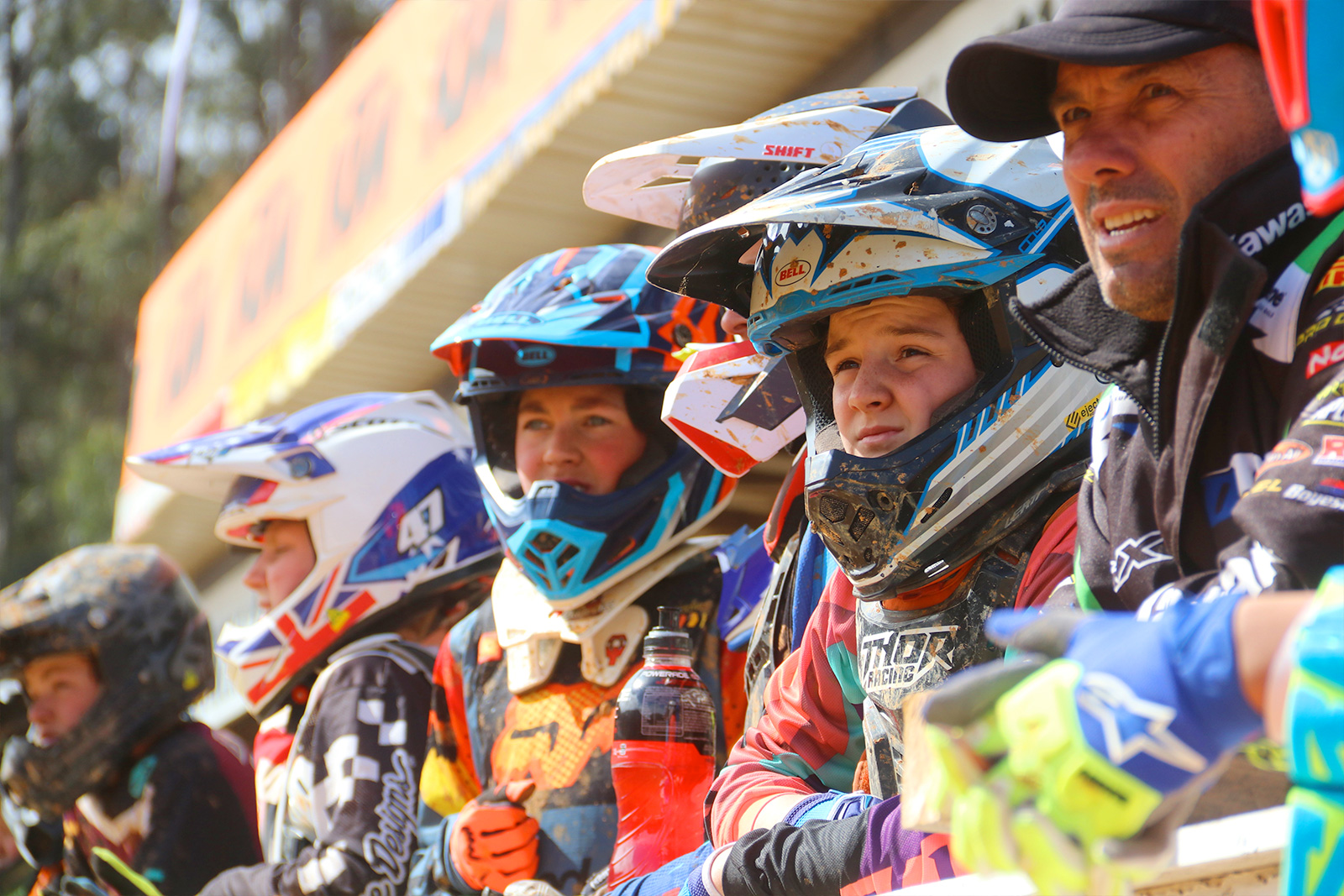