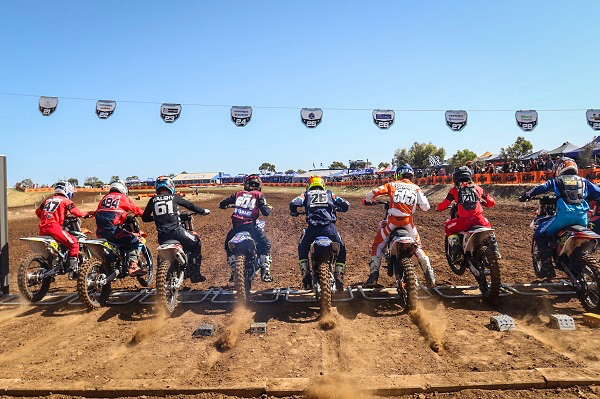 Day Four of the 2019 KTM Australian Junior Motocross Championship (AJMX) was contested once again under hot, windy conditions at the Motocross Riders Association in South Australia and the hosting club are to be commended at their efforts of keeping the dust at bay.

Today saw all heat racing conclude and finals action well on display, the championships are reaching the real business end of the week and it will be fascinating to see who comes out on top!

65cc 10-U12
The first race up for day four of racing of the KTM AJMX was the third final of the 65cc 10-U12 class, Queenslander Jake Cannon took the win from New South Welshman Ky Woods although Ky had the fastest lap time for the race of 1:59.551. West Australian Kayden Minear flew over the finish line with a strong third.

100-125cc 2st 13-U15
As most classes are well into their finals the 100-125cc 2st 13-U15 were still completing their heat races earlier on Day 4. Heat 5 saw Queenslander Jack Mather pull an impressive fast lap of 1:49.742 to take the win from West Australian Liam Atkinson who was followed closely over the line by New South Welshman Ryder Kingsford for third place.

Heat 6 for this class saw Queenslander Jackson Camilleri take the win with quickest lap time of the race, 1:48.947, followed over the line by his fellow counterpart Ryan Alexanderson and Western Australian Brock Flynn rounding off the top three for this race.

50cc Division 2 ‰ÛÒ 7-U9
The only race for this class today was the third final and saw sandgropers Mason Brown and Deegan Fort battle it out for first, Mason took the win with the quickest lap time of 2:19.424, Deegan followed closely in second and Queenslander Bodie Court finished a strong third.

128-150cc 2st/250cc 4st 15 yo
The third final and the only race of the day for this junior lites class was won by South Australian Alex Larwood who pulled a super quick lap time of 1:45.437! New South Welshman Blake Fox and Queenslander Levi Rogers tussled it out for second and third respectively.

128-150cc 2st/250cc 4st ‰ÛÒ 13-U15
The fourth final of the 13 to under 15 junior lites class saw Brad West (QLD) storm across the finish line to take the win ahead of fellow Queenslander Jackson Camilleri and New South Welshman Thynan Kean battled it out for third. The quickest lap time for this final was Brad West with a respectable 1:50.180.

65cc ‰ÛÒ 7-U10
The first KTM AJMX final for the 65cc 7-Under 10 class was full with exciting tussles throughout the field and although New South Welshman Jack Burton had the fastest lap time of 2:15.533, Tasmanian Cooper Ford pipped him at the post for first, Jack came second and Queenslander Lachlan Allen closely followed behind in third.

100-150cc 2st/250cc 4st 13-U16 Girls
The girls were all geared up and rearing to go for their fourth final earlier on in the day and once again Queenslander Charli Cannon impressed the crowds with the fastest lap time of 1:59.658 taking the win ahead of Taylah Thompson from New South Wales and Victorian Madison Healey.

85cc/150cc 4st ‰ÛÒ 9 ‰ÛÒ U12 SW
After a few days of riding and racing the mini lites were rearing to go in their first final for the KTM AJMX championships and as they came flying out of the gate West Australian Kayden Minear pulled the fastest lap time of 2:01.498. However, by the end of one of the most hotly contested races of the day it was Queenslanders Liam Owens and Jake Cannon crossing the finish line first and second followed by Kayden Minear in third.

85cc/150cc 4st ‰ÛÒ 12-U16 Girls BW
The fourth final and the only race of the day for this girl‰Ûªs class saw Queenslander Charli Cannon pull away and take the first-place flag with a lap time of nearly 4 seconds faster than her closest rival-an incredible 2:00.912! Taylor Thompson from New South Wales and Queenslander Taylah McCutcheon once again had a fantastic battle in hot race conditions for second and third respectively.

100-125cc 2st 15 Yo
The young guns took to the track in the heat of the day but thanks to a dedicated team of volunteers the dust was kept to a minimum throughout the days racing. New South Welshman Blake Fox took a commanding win with the fastest lap time of 1:50.115, nearly a full two seconds faster than his closest rival, Queensland‰Ûªs Levi Rogers who came in second and Cameron Torpy from New South Wales rounded of the top three.

For South Australian Alex Larwood, his run of wins came to an end, with a bike malfunction leaving him to limp home in 26th position and putting a big dent in his championship hopes.

85cc/150cc 4st BW ‰ÛÒ 12-U14
The 85cc/150cc Big Wheel class burst onto the scene in the late afternoon for their first final of the KTM AJMX Championships. The race was exciting from start to finish with battles throughout the field and place changes occurring throughout. New South Welshman Connor Towill had the quickest lap time of 1:57.897 and crossed the line first with fellow counterparts Ryder Kingsford and Cody Kilpatrick following with second and third respectively.

85cc/150cc 4st ‰ÛÒ 14-U16
The fourth final for this class was the second last race of the day and was hotly contested seeing a three-way battle for first, second and third. Although Queenslander Zachary Watson had the fastest lap time of 1:56.290 it was New South Welshman Ben Novak who took the chequered flag for first, Zachary crossed the line in second place and Hunter Collins from New South Wales came in with a strong third.

With heat races now complete The KTM Australian Junior Motocross Championships really start to heat up on day five tomorrow, with riders set to make their claims as the favourites for this year‰Ûªs titles.