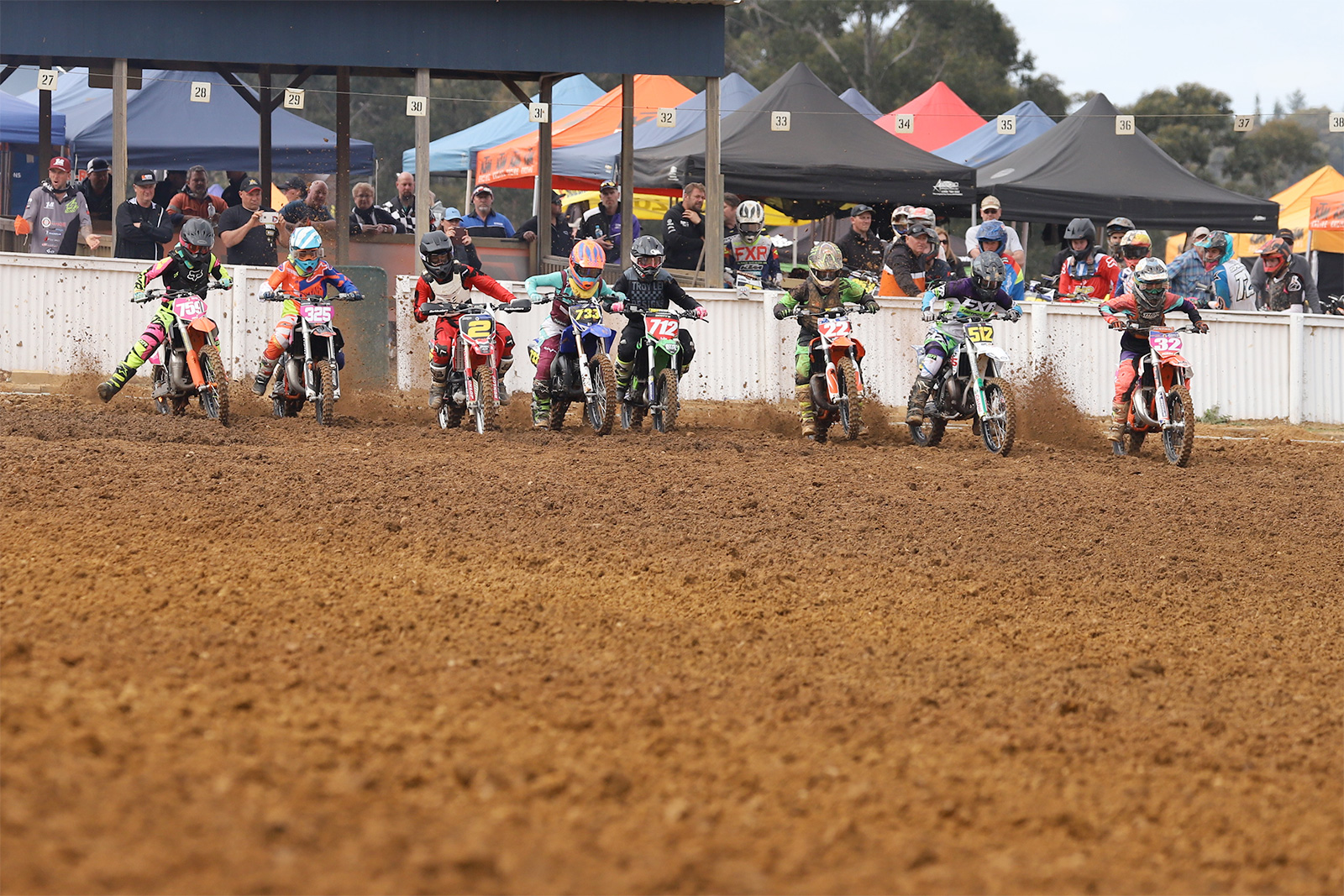 The Championship is reaching the real business end of the week and it will be fascinating to see who comes out on top!

Ryder Kingsford (NSW) won the race in heat six, dominating the race with a ten second margin in hand. The real battle unfolded behind him between rivals Brock Sleader (QLD) and Hunter Collins (NSW), who were only separated by two seconds. Cobie Bourke (NZ) and Liam Atkinson (WA) closed out the top five.

It was a Hunter Collins (NSW) show in Final 1, dominating the race to add a victory to his tally. The excitement was once again all about who got second place between Rory Fairbrother (NSW) and Ryder Kingsford (NSW), who fought to the very last lap. Ryan Alexanderson (QLD) and Jett Burgess-Stevens (TAS) closed out the top five.

65cc 7-U9 Finals 2 & 3
Final two of the 65cc 11-U12 Years class was captured by Victorian Jobe Dunne, who led the charge to the flag that brought him a 3.745 second victory. Phoenix Blanchette (NSW) kept Jai Hay (SA) at bay for second, as did Cooper Ford (TAS) with Jay Jennings (TAS) to hold down fourth.

The third final was a much easier win for Cooper Downing (QLD) who cruised to a 23 second gap for victory. The battle for second was far more interesting with just over a second covering second to fifth. Jack Burton (NSW) managed to take that highly sought after second place, followed by Marcus Nowland (NSW), Cooper Ford (QLD) and Ryder Creeke (NSW).

Junior Lites 13-U16 Girls Years - Finals 2 & 3
Queensland‰Ûªs Charli Cannon continues to cement herself as the title favorite after adding another commanding win to her name in the Female Junior Lites class, smashing the competition with a 45 second lead. Taylor Thompson (NSW) closed out the race in second. Taylah McCutcheon (QLD) and Tanesha Harnett (NSW) were awarded third and fourth positions, with Holli Geeves (TAS) pulling through for fifth.

In the final race of the day Cannon take another incredible victory, this time she was followed by McCutcheon in second, albeit this time it was only a 13.855 second win. Harnett also managed a third-place finish.

125cc ‰ÛÒ 15yo ‰ÛÒ Final 2
The race in the 125cc 15-year-old class was all about the battle between Tye Jones (QLD) and Regan Duffy (WA) throughout the seven laps. Jones to the victory with Duffy having to settle for second. Noah Ferguson (QLD) came out with third place followed by Korey McMahon (NSW) and Corben Weinert (WA) in the top five.

Mini Lites BW 12-U16 Girls ‰ÛÒ Final 2
In the Female Mini Lites 12-U16 Years category, Taylah McCutcheon (QLD) raced to another impressive win with a 4.827 second advantage. Queensland‰Ûªs Charli Cannon wound up second ahead of Taylor Thompson (NSW), while it was Jessica Robertson (VIC) and Brydie Hingston (TAS) who fulfilled positions four and five.

Mini Lites SW ‰ÛÒ 9-U12 ‰ÛÒ Final 1
Western Australia‰Ûªs Kayden Minear continued to impress in the first final, albeit by only 2.850 seconds to capture the race win. Jet Alsop (QLD) positioned himself in a comfortable second, while Seth Burchell (NSW) held on for a distant third. Jake Cannon (QLD) crossed the line in fourth followed by Seth Shackleton (WA) in fifth.

Mini Lites BW 12-U14 Years Final 1
It was a Hunter Collins (NSW) show in Final 1, dominating the race to add a victory to his tally. The real battle unfolded behind him between rivals Rory Fairbrother (NSW) and Ryder Kingsford (NSW), who fought to the very last lap. Ryan Alexanderson (QLD) and Jett Burgess-Stevens (TAS) closed out the top five.