Australia Ready and Waiting for the 2017 Motocross of Nations 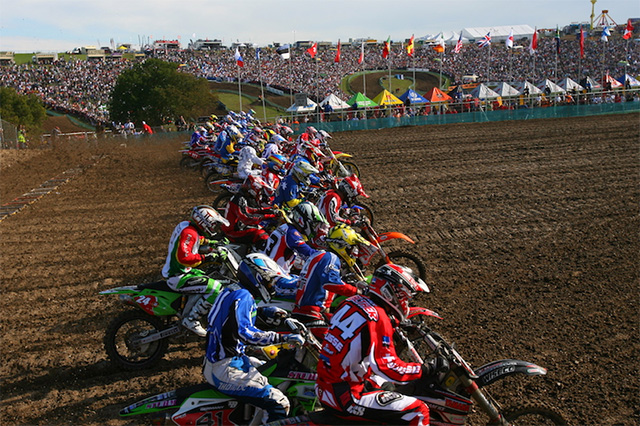 The ‰Û÷Olympic Games of Motocross‰Ûª the FIM Motocross of Nations (MXoN) is fast approaching, taking place from September 30 to October 1, in Great Britain.

It‰Ûªs one of the largest and most anticipated bike showdowns on the globe. Team Australia will send a three-man team, to compete against the best motocross riders, and will be determined to achieve success at the event.

The 2017 MXoN taking place at Matterley Basin, is the biggest Motocross event in the world. This is the 71st running of the event and will bring up to 39 nations together. The venue is world class with its grassy hills and natural terrain. The track this year has been updated with new additions and a longer track length, which is sure to give the tens of thousands of fans an epic viewing experience. Last time the circuit hosted the MXoN was in 2006 and it provided not only great racing, but amazing atmosphere.

The MXoN has be traced back to 1947 and the event has always carried cultural significance. Historically, Great Britain dominated the early years, before the competition became fiercer. With the rise of motocross in North America from the 1970s, the USA embarked on a famous winning streak, lasting 13 years from 1981 to 1993. France have dominated the previous three MXoN‰Ûªs.

Yamaha‰Ûªs Dean Ferris leads Team Australia and pairs up with KTM Motocross Racing Team‰Ûªs Kirk Gibbs and Team Suzuki World MX2‰Ûªs Hunter Lawrence. Lawrence comes off his career first race win and pole position at the MXGP of Pays de MontbÌ©liard only a couple of weeks ago. Gary Benn remains as Team Manager of the Australian Team for the 2017 MXoN.

In an exciting development, RACESAFE‰Ûªs Jon Park will support the Australian Team. Park is the Chief Sports Physiotherapist for RACESAFE. This will be the first time there has been medical support for the Australian team at MXoN and Park is proud to have helped pave the way for the progression of the sport regarding sports medicine and in particular physiotherapy.

Multi-time and defending champions, Team France again possess a strong team led by Rockstar Energy Husqvarna Factory Racing‰Ûªs Gautier Paulin. The experienced French rider comes off a strong season in the MXGP World Championship, where he won the MXGP of Europe in Valkenswaard and took third overall in the championship standings.

The home country, Team Great Britain will indeed have the crowd behind them. The team is made up by Monster Energy DRT Kawasaki‰Ûªs, Tommy Searle plus Rockstar Energy Husqvarna Factory Racing‰Ûªs Max Anstie and Dean Wilson. Anstie has momentum on his side as he was on the podium three times in his 2017 rookie MXGP campaign and two of them came at the last two rounds.

Team Switzerland will be a force to reckoned with as well, with Wilvo Yamaha MXGP‰Ûªs Arnaud Tonus, Team Suzuki World MXGP‰Ûªs Jeremy Seewer, and Honda Redmoto Assomotor‰Ûªs Valentin Guillod. Tonus while returning from injury has an MXGP race win to his name in 2017 and Seewer steps up to the 450cc after finishing second in the 2017 MX2 World Championship.