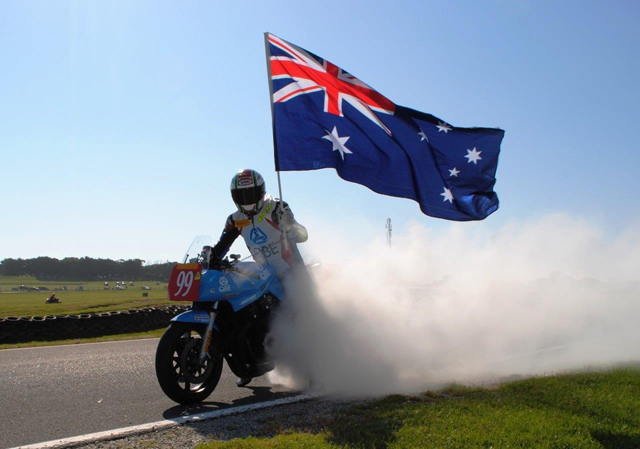 Local hard charger Steve Martin is confident that Australia will more than meet the threat of a strengthened United Kingdom outfit - and against a backdrop of visitor-friendly rule changes - when the International Challenge teams‰Ûª trophy is held at the 2014 Australian Motorcycle News International Island Classic in Phillip Island from January 24-26.

Squads were announced today for the marquee event of the Classic, the Tahbilk International Challenge, featuring teams from Australia, the UK, the USA and New Zealand.

Martin is one of 12 riders in the Australian squad at the now-iconic historic motorcycle meeting, alongside such luminaries as Shawn Giles, Rob Phillis, Cam Donald, Malcolm Campbell and Beau Beaton, who all competed at the 2013 event.

But it wasn‰Ûªt only the top-tier practitioners who helped Australia continue its unbeaten run in the 2013 Challenge - its extraordinary depth also played a vital role, as it has since the trophy was inaugurated back in 2005.

That ‰Û÷loophole‰Ûª has now been closed in 2014, with the winning country to be determined according to points accumulated by the top five riders in each country across the four six-lap races. Previously, points ‰ÛÒ or a lack thereof ‰ÛÒ were awarded to all 10 riders in the team.

The rule changes will give the visiting teams, the United Kingdom, the Dave Crussell led US team and New Zealand under the helm of Kevin Grey, a real chance of winning in 2014. This is especially true for the UK outfit which has been fortified with the inclusion of Isle of Man legend John McGuinness to compete alongside Jeremy McWilliams, the individual winner in two of the last three years, and fellow blue-chip talent Gary Johnson, Mike Edwards and Steve Brogan.

McGuinness is a 20-time winner at the Isle of Man, second only to the incomparable Joey Dunlop. Martin senses a UK storm is brewing, but he still believes the Aussies have too much class.

‰ÛÏThe Poms keep on changing the rules until they win, so they‰Ûªll have to win eventually,‰Û