Australia Beat the U.S.A for final spot in the 2013 Speedway World Cup 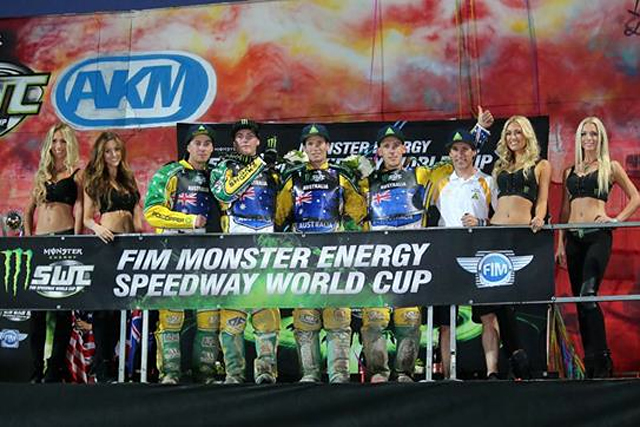 Australian skipper Troy Batchelor hopes his side‰Ûªs epic Monster Energy FIM Speedway World Cup Race Off triumph in Prague on Thursday will give them the edge in Saturday‰Ûªs Final.

The Roos join the Czech Republic, Poland and Denmark in the last four after a dramatic victory in one of the most closely contested Race Offs ever witnessed.

The USA may have been tipped to exit the Monster Energy SWC as early as Event 2 on Monday, but they produced an heroic performance to finish second in the Race Off on 31 poiubts and still could have qualified for the Final going into heat 20.

Latvia capped their greatest ever Monster Energy SWC by finishing third on 29, while Team Great Britain were fourth on 28.

All four nations could have won the meeting going into the penultimate heat, but the Aussies got the verdict and Batchelor hopes his team will put their Marketa Stadium experience to the best possible use on Saturday.

‰ÛÏWe always seem to go through the Race Off." Batchelor stated. "It‰Ûªs the hard road, but we‰Ûªve had a meeting on the track, whereas everyone else has just been watching.

‰ÛÏI think that will help us a lot on Saturday and I think we‰Ûªre going to be battling for a silver or bronze medal. ‰ÛÏThis meeting is crucial. When we did it in Gorzow two years ago, we nearly won the gold medal.

"We came through the Race Off, won that and we knew what to do. Setup in speedway is 90 percent of the race. I think we learnt a lot about the track and I hope we can use it to our advantage," he added.

The Poles and Danes are red-hot favourites to claim the Ove Fundin Trophy in the Czech capital.

But Batchelor admits the USA‰Ûªs unlikely charge to fifth place in the tournament has inspired him and Australian team mates Darcy Ward, Jason Doyle and Cameron Woodward to upset the odds.

‰ÛÏIt‰Ûªs tough, but anything can happen. No-one was thinking about America and, all of a sudden, they were close to winning the Race Off. We‰Ûªre going to have a little bit of practice on Friday afternoon and try a few more things," Batchelor continued.

‰ÛÏI‰Ûªm pumped for this win. I‰Ûªm proud of everyone. We did an awesome job, and without Chris Holder ‰ÛÒ the world champ. Being without him hurts us a lot. But we‰Ûªre in the Final and I think we can grab a medal. That would be an amazing result with the riders we‰Ûªve got.‰Û