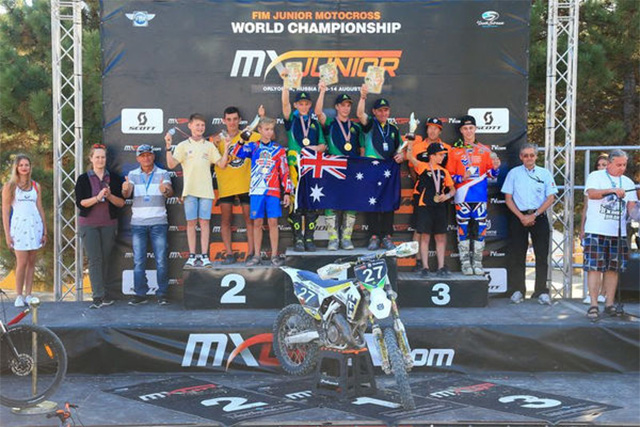 The 2017 FIM World Junior Motocross Championship (WJMX) is fast approaching and the competitors will soon jet off to Lange Motokeskus, Tartu in Estonia with Mark Willingham as Team Manager.

Team Australia are the current champions and will be looking to successfully defend the title. The WJMX will take place on the 30th of July.

Being a part of the Australian Team is a tremendous honour and a fantastic opportunity to represent the nation on the world stage. With Australia‰Ûªs excellent results in previous years, anticipation is at a high for this year‰Ûªs event, which is soon approaching.

Due to team commitments, Caleb Grothues will no longer be competing in the 2017 team. Grothes will be replaced by young talent Bailey Malkiewicz. Malkiewicz will be a welcome addition to the squad, as he has previously competed at the WJMX on two previous occasions.

Team Manager Mark Willingham described his palpable excitement for the upcoming WJMX; ‰ÛÏWe will soon to be heading off shortly to Estonia to compete in the WJMX. Our team is very strong and are confident about the possibilities at this year‰Ûªs event. With Australia‰Ûªs previous success, many riders registered their interest to be part of the Australian Team. If you look at several rider‰Ûªs careers after the WJMX, it‰Ûªs obvious that it‰Ûªs a great stepping-stone for future possibilities.

‰ÛÏI feel that we are in a really good place this year, as we are able to have a mixture of riders based here in Australia and based in Europe," according to Willingham." It‰Ûªs definitely important to make sure junior riders from Australia are able to represent their country well, while also learning all they can from the experience.

"We will meet at a practice track on the Tuesday evening, at Tihemetsa (Estonia) July 25, on the Tuesday before the event. The Friday is scrutineering and rider sign on, Saturday is qualifying, Sunday July 30 is warm-up and the races. Over the past few weeks I‰Ûªve been in constant communication with the team and we are prepared for the challenge ahead," Willingham concluded.

Make sure to keep an eye out on the WJMX riders and teams as they battle it out against the world‰Ûªs best in class. MA is very enthusiastic about the prospects for this year‰Ûªs championship competitors and the title hopes for Australia in Estonia.