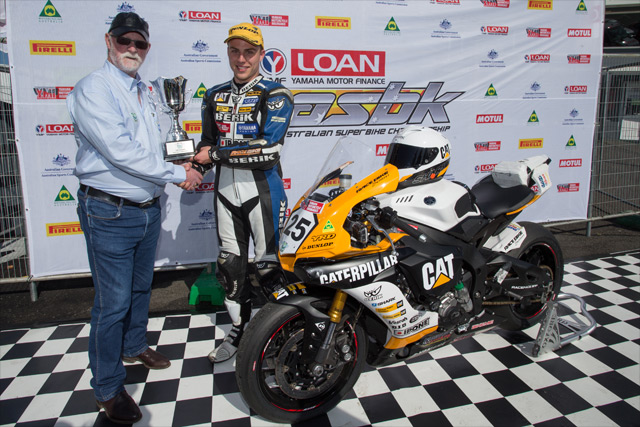 Falzon was taking on Team New Zealand rider Ryan Hampton (Next Gen Motorsports) in a head-to-head battle, with the best combined results from the two Superbike races counting towards the Championship.

The Oceania event was held in conjunction with round five of the 2015 Yamaha Motor Finance Australian Superbike Championship presented by Motul Pirelli.

In the opening race of the day, Falzon and Hampton were within touching distance of each other for the first half of the race.

With Falzon in fourth position and Hampton in fifth, the Aussie rider began to put some distance between his Yamaha and Hampton‰Ûªs BMW as the race wore on.

It was exactly how they finished ‰ÛÒ Falzon ending the race 61.52 seconds ahead ‰ÛÒ meaning whichever rider finished ahead in race two would clinch the title.

On the second lap of the race drama unfolded as Hampton went down at turn four ‰ÛÒ ending his race and effectively handing Falzon the title.

Falzon rode on to claim fourth place yet again and ensure that the trophy for the FIM Oceania ‰ÛÒ 2015 Road Race Championship remained in the country.

‰ÛÏIt‰Ûªs a great honour to bring home the inaugural Oceania championship for Australia." Falzon said. ‰ÛÏRyan was going to be a tough competitor this weekend ‰ÛÒ he has shown speed at every round and has consistently been getting faster and faster. ‰ÛÏBut I knew that I had a fair bit more experience around this track then he did, and I felt confident in my bike and the team that we could win it here this weekend.

‰ÛÏIn the last race I put my head down from the start and try to pull a gap, maybe put a bit of pressure on Ryan, and it is bittersweet with Ryan having a fall, but it allowed the Championship to fall in our lap and it‰Ûªs a good thing.‰Û