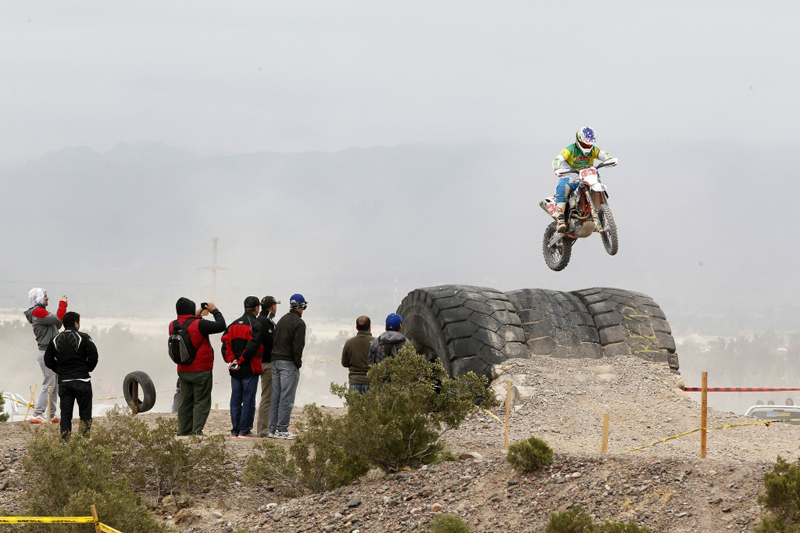 The third day of the 2014 International Six Days Enduro in Argentina has unfortunately taken it's toll on the Australian team with three riders being forced out of the event due to bike issues.

According to a report on 2014 MA Australian ISDE team Jarrod Bewley was forced out of the days proceedings in the opening stage of day three, with Josh Green and Tom McCormack also having bike related issues on the day's final stage forcing them to retire.

The day's results confirm that all three Australian's were not able to complete the day's riding and we have had word that Tayla Jones is also nursing her bike home at the end of each day, though she was able to finishes second to Australian team-mate Jessica Gardiner in the Women's standings on day three.

Overall Team France has increased their lead in the Trophy competition by 16 minutes and 16 seconds ahead of the United States with Spain a further 1 minute and 14 seconds further back, while Australia is now ranked 7th some four and a half hours behind France.

In the Junior Trophy, Australia have slipped back to fourth after McCormack's set back on day three, however the young Aussies are still well in contention with three day's of competition remaining, currently sitting in fourth postition, just 3 minutes and six seconds behind the leading U.S team. Sweden currently sits in second position 26 second behind the United States with France in third a further 1 minute and 17 seconds a drift.

The Australian Women's team blew their competition out of the sand on day three, with Jessica Gardiner, Tayla Jones and Jemma Wilson finishing 1-2-3 to give their team a 1 hour and 22 minute lead at the half way point.

In the individual classes, France's Christophe Nambotin leads the way in the E1 class. Jarrod Bewley's retirement leaves no Australian competitors in E1 after day 3.

It is another French rider that leads the E2 class with Pierre-Alexandre Renet holding a 2 minute and 15 second lead over Aussie Matthew Phillips, while Joshua Strang sits in fourth after three days of competition, just under four minutes behind Renet.

Scott Keegan continues his strong run in 20th position, while as mentioned above, Green, McCormack have now both joined Daniel Milner on the sidelines after day three.

Australian Toby Price leads the way in the E3 standings, some two and a half minutes ahead of Spain's Ivan Cervantes with American Mike Brown in third 3 minutes and 11 seconds behind Price.

Daniel Sanders moved himself up into 5th position in the E3 standings with another solid day behind the bars and currently sits just over 8 minutes behind Price at the half way mark, while Lachlan Stanford is just 20 second further back in 8th position.

Jessica Gardiner leads the Women's class by 4 minutes and 51 seconds over Jemma Wilson, while Tayla Jones has moved up to 4th place just under 30 minutes behind Gardiner after her troubles on day one.

Top Image: Toby Price leads the E3 class after a day that seen an end put to the Aussies Senior Trophy teams hopes of winning.