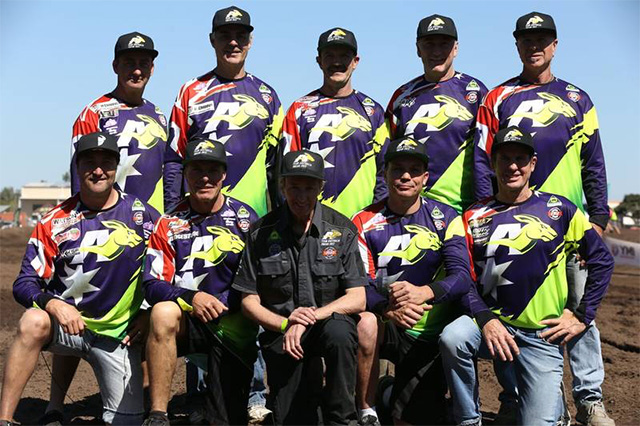 The final round of the Australian Motocross Championship - the Motul MX Nationals held last weekend at Coolum in Queensland provided a fitting back drop for the Australian Veteran Motocross des Nation (VMXdN) Team to gather for the first time.

The group are set to take off for Farleigh Castle in Somerset, England for the biggest vintage Twin Shock & Evo event in the world boasting well over 620 entries, with countries from all over the world represented.

Team manager Rosco Holden of "Holden on Tight" presented his 'dream team' with their Australian VMXdN team clothing and helmets that clearly sports the unmistakable logo; 'Broo-Tus' the fighting kangaroo.

Holden commented on the highly anticipated departure from Australian shores; "Everyone is up on their toes about the event and excitement is at an all-time high. We cannot wait to get over there and start unpacking the bikes and gear. It's a level of excitement that these 'old boys' have not experienced in a while! Holden joked. "We are all together up here in Queensland enjoying the hard fought Motocross Nationals racing over the weekend that has got us all revved up and reminded us of the job ahead.

"We arrive in the United Kingdom on the 12th & 13th of September ahead of the VMXDN on 15th & 17th in the South West, until the end of the month when we will also check out the modern Motocross Of Nations (MOXN) which is billed as the "Olympics of Motocross", at Matterly Basin (UK). We will be dressed in our Australian Team uniform, flying the flag for our MX boys competing, such as Kirk Gibbs, Hunter Lawrence and Dean Ferris.

"Our expectations of how the Aussie VMXDN team will go at Farleigh Castle are that we are looking forward to the full experience of the event. These guys are all top level racers from back in the day and once that helmet goes on, the red mist rises and we will be throwing down the gauntlet to all competing nations! Holden warned.But the lead up to the event has not been without drama for the Aussie team, with a few niggling injuries plaguing the riders, Holden says; "Kittle with a broken collar bone and Multi Australian Champion Glenn Bell out injured for a while, but all are now back on their feet and ready to go!

"As far as bikes go, most teams and riders uses two-stroke bikes, but last year a few German lads were mounted on big four-stroke Huskie thumpers. For the Twin Shock class we have our Maico 490, Kawasaki KX, and Honda 250's. Our Evo class bikes consist of Honda CR 500's, the class feature bikes that have modern equipment as disc brakes, mono rear shocks, and alloy frames. We have a very good chance at the Evo class, as it's our strongest, but it will be the top three results from our top four riders that will really count!" He concluded.