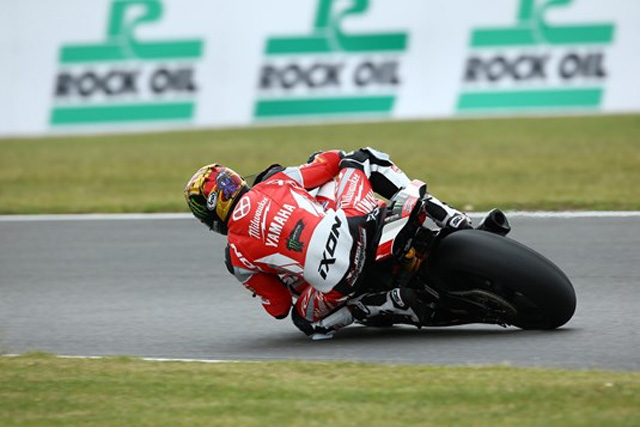 Josh Brookes claimed another double podium finish at the fourth round of the MCE Insurance British Superbike Championship at Snetterton for the Milwaukee Yamaha team with a pair of second places to move just 17 points adrift of the standings leader.

In the opening race Brookes carved his way through from sixth place to second by lap twelve and continued to close the deficit to race leader Shane Byrne over the closing stages to claim another second place finish. .

Race two again saw Brookes fighting in the leading group and determined to push for the first win of the season. However a problem caused the Australian contender to drop down the field, but in true Brookes style he didn't give up and fought on to move back through the pack to finish second.

"I definitely didn't get the start I wanted in race one; as I let the clutch out, it was bunny hopping and I lost all my momentum. Going into the first turn, I got bunched up then - there were a lot of different bars bumping." Brookes explained.

"In turn two, it was still a bit squirrelly, and I kind of got stuck in a position behind Stuart Easton for a while. He's really strong on the brakes, and I struggled to find a way past him. I stayed there far too long, but once I did make the pass I could move forwards and make some passes easier, but we had a strong end to the race and I was happy to be back on the podium.

"We had a bit of an issue in the second race, we have limited electronics but where they work most is on engine braking and mid-way through that race it kept locking up the tyre, not completely but skidding into the turns and I was missing my apexes and losing power. If I rode in my normal way it would have caused me more problems as I would have gone further backwards as you would have seen, but I figured out a way to ride without using the engine to slow the bike up on the way in to the corners.

"I was able to come back through the pack to come back to second and I was really fortunate to make the end of the race as at one point I thought I might have to pit. I am really pleased though that we could make it a double podium."

Team-mate and countryman Broc Parkes put in a determined ride to battle up the order from 19th place on the grid to claim 11th, narrowly missing out on the top ten. Parkes had a strong start in the second outing, pushing towards the front of the race, but he later dropped down the order to score his second 11th place finish of the weekend.

"The first race we started in 19th and got off to a good start, but we got hit in the second corner and went back down the pack and had to climb my way through and I was happy with my pace to finish eleventh and to catch up the time." Parkes commented.

"In race two we could be a lot stronger from seventh and I got a blinder of a start and got up to fourth position and was hanging in there and thought I had a good pace. The safety car didn't really help me and I didn't get quick enough off the last corner when it came in and then two guys came under me and from there I didn't quite have the pace and I felt like I lost a lot of rear grip and basically went back.

"The good thing was I was running near the front and I need to work on that and come back stronger." Parkes concluded.