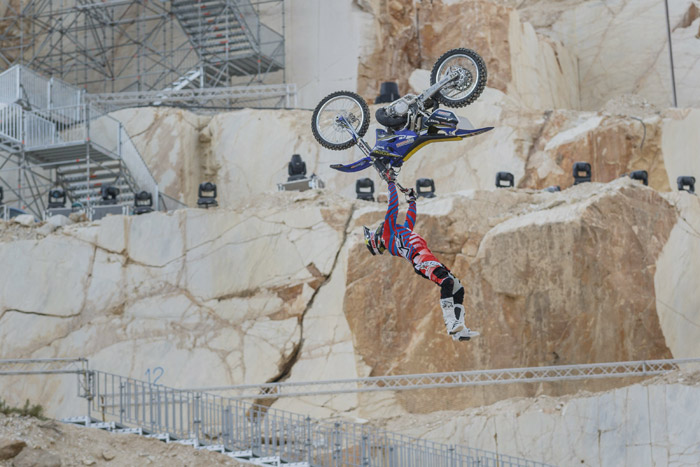 Australia‰Ûªs Clinton Moore won the first two Red Bull X-Fighters competitions in 2015 but France‰Ûªs Thomas PagÌ¬s has won the sport‰Ûªs quintessential stop in Madrid the last two years running. At least one of those streaks will come to an end on July 10 in Las Ventas.

The most anticipated stop of the 2015 World Tour in the Plaza de Toros de Las Ventas is shaping up to be another classic showdown of the world‰Ûªs best freestyle motocross riders.

Tour leader Clinton Moore (AUS) will try to extend his winning streak this year to three straight victories when the Red Bull X-Fighters return to its home in the heart of Madrid. But Thomas PagÌ¬s (FRA), who has won here the last two years, is a close second overall and will also be looking for a win as the world‰Ûªs most prestigious FMX tour moves into the second half of the season.

Local hero Dany Torres is the only other active rider who has won twice in Las Ventas as well (2009, 2011) and is also hungry for another win in front of his Spanish fans. Only one rider, Mat Rebeaud (SUI), has ever managed to win three consecutive stops and only Travis Pastrana (USA) has won three times in Madrid.

The crowd-pleaser in Spain‰Ûªs biggest bullfighting arena is the highlight of the FMX calendar each year ever since the first Red Bull X-Fighters event was held here in 2002. Cheered on by appreciative and knowledgeable Spanish fans packing the 23,000-seat Las Ventas bullring, Madrid has become the competition where the riders unveil their best and biggest tricks each year.

The compact track and a brand new course design this year will make it even more challenging, with more jumps than ever before. The top riders will be pushing the limits with Alley-Oop Flairs, Double Backflips, Body Varials and the incredible Bike Flip that made its debut in Madrid last year when PagÌ¬s landed it for the first time to secure his win.

Reflecting the incredibly competitive field of riders, there will be a total of eight former Red Bull X-Fighters winners in Madrid. Alongside Moore, PagÌ¬s and Torres, reigning World Tour champion Josh Sheehan (AUS), 2012 champion Levi Sherwood (NZL), Rob Adelberg (AUS), Adam Jones (USA) and Taka Higashino (JPN) will be battling it out for the podium.

The five stop 2015 Red Bull X-Fighters World Tour started in Mexico City in March and moved to Athens in June.

After the Madrid stop, the tour travels to Pretoria (South Africa) on September 12 before the season concludes in the United Arab Emirates on October 30.