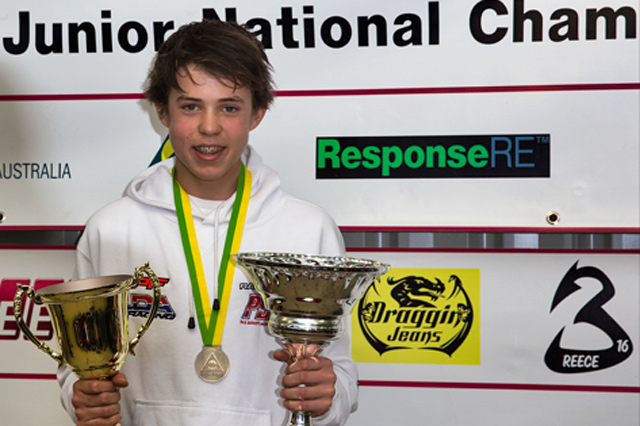 The 2013 Australian 150cc Road Racing Champion, Nicholas Liminton, has been selected as one of only 120 riders from all over the world to compete in the annual Red Bull Moto GP Rookies Selection Event to be held on October 15 at the Guadix circuit in Spain.

The Red Bull Rookies is seen as an important feeder event for MOTO 3 and only twelve riders will be selected from the Selection Event to join the series in 2015.

Hundreds of riders from all over the world apply to participate in the event with only the very best riders actually receiving an invitation to try out.

Liminton (15) attended the selection event for 2014 as a 14 year old, making the final selection trial but eventually missing selection. In an attempt to improve his riding skills, and to maximize his chances of realizing his dream to make the series, Liminton and his father Richard made the momentous decision to pack up home and move to Spain to allow him to compete in the Copa De Espana in the Pre Moto 3 class.

Like many Australians before them the Liminton family is making significant sacrifices to help Nicholas achieve his dream.

For this first year abroad his mother and sisters stayed in Australia, visiting Nicholas and Richard during the season. Because of his age it was necessary that he continue his schooling, meaning on line studies.

Take the time to imagine, if you will, the difficulty of what they have taken on. Liminton would be in a strange country with a different language and culture, without half of his family and he would also face a significant increase in opposition talent, completely foreign tracks and an increase in bike size from his previous 150cc bike to 250cc.

It is a test that many of us would fail but It would prove to be a test that Nicholas would handle with aplomb.

During the 2014 season Liminton rode for the Cardelus BST team on a Harcpro Pre Moto 3 250. He was also fortunate enough to bring along his personal sponsors Arai Europe and his long time Australian sponsor Ricondi who both provided much needed support to the venture.

Competing against regular fields of up to forty riders he has had an exciting year and has showed his true potential and fighting spirit. This was never more obvious than during Round 1 in Alcarras where, after showing great promise in qualifying, the rain came at the start of the race and he hit a wet patch off line and crashed incurring serious injury resulting in an extensive stint in ICU.

Liminton fought back from this mishap courageously to make the start in the second round at Jerez, eventually finishing 9th. His courage and maturity was further tested during the series when he failed to score points in two other rounds as a result of engine failure in one and a minor (compared to the first round) crash.

Despite these mishaps and not scoring points in three rounds Liminton has showed an impressive ability to match it with the best in the class, regularly finishing inside the top ten, and he is currently sitting in 15th position in the championship.