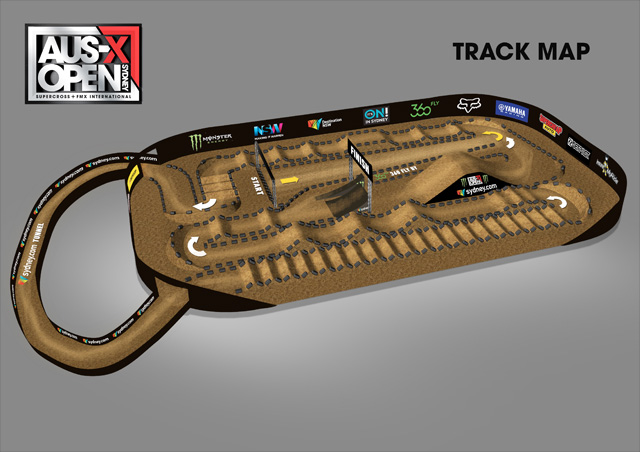 The 2015 AUS-X Open is set to revolutionise Australian Supercross competition, with an innovative and exciting circuit design being released for both events inside AllPhones Arena on November 28 & 29.

The AUS-X Open will feature the world‰Ûªs first ‰Û÷360fly by‰Ûª lane, which acts as a shortcut that riders are permitted to use just once throughout each of the main events.

The inception of this lane introduces the necessity for strategy, which will be an intriguing addition to the fast-paced supercross action, certain to create uncertainty over who will actually win each main event given the multitude of passing opportunities.

The AUS-X Open will also feature the world‰Ûªs only tunnel on a supercross track for 2015. The 100m long 'Sydney.com Tunnel' is expected to provide further passing opportunities and will challenge riders‰Ûª technical abilities across the varying track elements.

Riders will disappear from view and exit the stadium floor through AllPhones Arena's 'Tunnel 1,' travel through the venue's back of house and storage area's, before re-entering the stadium via 'Tunnel 4.'

In a revolutionary twist and for the first time ever in the Southern Hemisphere, the AUS-X Open course will incorporate 'FMX style' steel take off ramps into it's design. Based off the same design specifications of FIM approved, FMX competition ramps; spectators will be blown away by the heights achieved by racers over the AUS-X Open finish line jump, side by side, lap after lap, over the 65 foot gap and onto a purpose built, 5 metre tall and 8 metre wide, dirt landing ramp.

Combining the fundamental supercross obstacles, built using over 3,500 tons of clay based soil being imported via approximately 100 truck loads, with never-before-seen elements, the AUS-X Open is set to provide fans a viewing experience like nothing they've ever experienced before.

AllPhones Arena is Australia's second largest indoor arena (behind Etihad Stadium) and event organisers plan on using every inch and more, to its fullest potential.

For the event's promoters - AME Management; the theory behind incorporating these unique elements is simple; revolutionise the spectacle of Supercross and give spectators even further reason to be entertained beyond expectation.

‰ÛÏOur aim from the get go with the AUS-X Open has been without a doubt, to change the game and offer a completely new and unique entertainment spectacle for fans." stated Adam Bailey ‰ÛÒ Event Director.

"With the addition of the world‰Ûªs first ‰Û÷360fly by‰Ûª, the Sydney.com tunnel and the only event in the world with steel finish line jump; we know spectators are going to be truly stunned by what they see on both nights of racing and entertainment. We absolutely cannot wait!‰Û