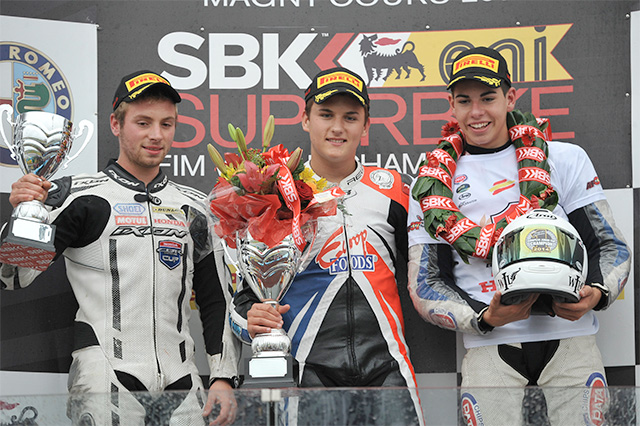 Fernandez, who celebrated his 17th birthday last week, needed just a single point from today‰Ûªs 10-lap race to wrap up the championship in which he had already scored four race wins and one other podium.

But, with a total of 12 riders crashing out of contention, he took his sixth podium in this afternoon‰Ûªs wet encounter at the 4.411km Magny-Cours circuit, following the day‰Ûªs two World Superbike championship races.

Fernandez stood on the Magny-Cours podium with race winner Javier Orellana, who finishes as runner-up in this year‰Ûªs series, 56 points clear of Angelo Licciardi, who was third. Second place in today‰Ûªs race went to French wildcard rider Dorian Laville.

Fernandez‰Ûªs prize for winning the title is a ride with the Racedays Honda squad in next season‰Ûªs FIM European Superstock 600 championship on a Honda CBR600RR and the young Spaniard is clearly excited at the prospect.

"Many people were passing me and I asked to myself what should I do? Go with them or stay in seventh place and win the championship? I was lucky, I guess, because four riders crashed in front of me and I was able to get to the podium! I am so very happy and want to say thank you to all the people who have supported me.

"I think we have done a really good season and I didn‰Ûªt crash in any of the races, so I am happy about that! I‰Ûªm also happy to be a part of this team in Superstock 600 on Honda‰Ûªs CBR600RR next year.