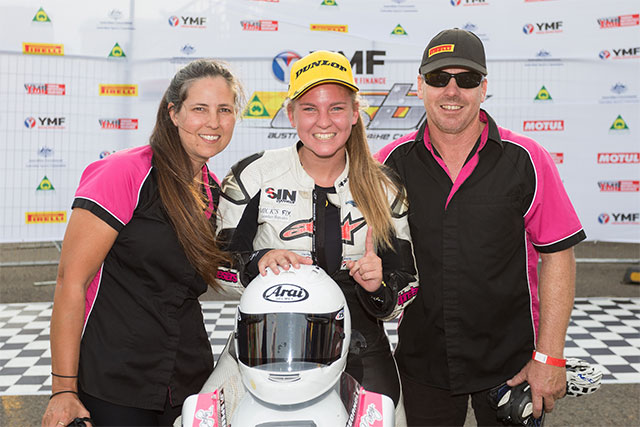 With Round 3 at Sydney Motorsport Park marking the half way point in the 2016 Yamaha Motor Finance Australian Superbike Championship presented by Motul Pirelli, competitors were determined to set themselves up for a chase for championships, with Production, Honda Moto 3/125GP, YMF R3 Cup and the Club Challenge classes getting in to qualifying, and race one today.

Braving the cool track conditions this morning it was the Honda Moto 3/125GP competitors who laid down the rubber in their opening practice session, young Tom Edwards managing the fastest time, prior to the first qualifying session for the class commencing.

When the Honda Moto 3/125GP competitors faced the Sydney Motorsport track for their qualifying sessions, it was once again Edwards who showcased his raw speed, concluding both qualifying one and two, at the top of the time sheets with the fastest lap of 1:40.164. Brian Houghton, current Moto3/125GP championship point‰Ûªs leader, was unable to catch Edwards, wrapping up qualifying with a 1:40.878 lap. Tayla Relph managed her fastest time in qualifying one, finishing in third with a fastest lap time of 1:41.136.

When the Honda Moto 3/125GP class commenced their first race for Round 3 this afternoon, the field lined up on the grid in anticipation of the race start. And it was young Locky Taylor who got a monumental jump, and shot out to the lead and in to the the first corner.

However, Edwards managed to pass Taylor, and left the door open for Relph to slip through, relegating Taylor to third, when the pack came on to the front straight. By lap two, there was healthy gap developing between the eager competitors, with Edwards out in front with a 5.5 second gap on second placed Relph.

By the half way mark of the race it looked as though the position‰Ûªs were decided, however the race was quickly tuned up side down, when young Edwards crashed at turn two, and was unable to re-join the field. Relph was then able to take advantage of Edward‰Ûªs misfortune, moving in to first position where she stayed for the remainder of the race. The lady of the moment then went on to cross the finish line in first place, while second place was taken by Taylor, and Ben Leonard concluded race one in third position.

The Over 300 Production, Under 300 production and Women‰Ûªs classes were the first bikes on track today at Round 3 of the Yamaha Motor Finance Australian Superbike Championship presented by Motul Pirelli. And when their first practice session of the day wrapped up this morning, Brandon Demmery appeared to have carried his form from Round 2, into SMP after setting the quickest pace on track.

After the opening practice session, the Production class then focused their attention on two qualifying sessions, which saw a total of 26 riders hit the track, who were all vying for the quickest times. At the conclusion of both qualifying 1 and 2 Demmery just couldn‰Ûªt be beaten, with a lap time of 1:47.302. Aiden Hayes wrapped up the sessions just behind Yamaha mounted Demmery with a 1:48.011 lap time, while Ty Lynch snatched up third position with a concluding lap time of 1:48.461.

With Demmery starting from pole position in the first Production race for the weekend, the pressure was on, as the tight knit group charged off the grid and into the first corner.

However, by the second lap it was Callum Alderson who managed to slot himself into first ahead of Demmery, with Hayes also managing to make the move on the Yamaha rider, relegating Demmery to third and slotting himself in second. But the positions didn‰Ûªt remain for long, as the top six riders battled it out in the 8-lap race, with the fight for the number on position well and truly alive.

By the half way point in the race, the positions had changed yet again, with Demmery reclaiming the front position but locked in to a neck and neck battle with Alderson, while Drew Sells managed to find his way through the pack to slot in to third. Jack Davies also snuck through the traffic into fourth, while Hayes and Lynch rounded out fifth and sixth places respectively.

The battling six riders kept spectators on their feet, as they approached the closing stages of their first race for the weekend. The pressure mounted for Davies in fourth, who eventually crashed on the last lap forcing him to lose valuable positions. Demmery then went on to stream to the finish line on his Yamaha machine, taking the opening race win just ahead of Alderson in second, who was only inches off first place. Sells also managed a strong race finish, in third while Hayes wrapped up race one for the Production class in fourth.

With the first round jitters out of the way for the all new YMF R3 Cup, competitors headed out for their first practice session at Sydney Motorsport Park, where Aiden Hayes proved his dominance ahead of the first qualifying session with the top time in practice.

When the first qualifying session got underway for the YMF R3 Cup competitors, Zec Levy managed to redeem himself after this morning‰Ûªs tough practice session, finishing fastest with a 1:48.881 lap time. Callum Alderson narrowly missed out on the top position, finishing only .235 seconds behind Levy in second, while Hayes finished third with a 1:49.593 lap time.

With the battles between the YMF R3 Cup competitors growing, the second qualifying session saw a change in the standings. Alderson managed to knock Levy from the pole position, launching his Yamaha machine around the track to post a 1:48.129 lap time. Levy then sat in a comfortable second (1:48.881), while Hayes remained strong in third at the conclusion of the second qualifying session with a 1:49.850 lap time.

When racing kicked off this afternoon for the YMF R3 Cup class, it was Alderson who remained on top, as he led the pack around the first corner. Alderson wasn‰Ûªt without pressure, as Levy stuck close behind and was determined not to let Alderson out of his sights. The number 37 machine of Jack Mahaffy rounded out the top three, followed closely behind by Ty Lynch, Michael King and Aiden Hayes in fourth, fifth and sixth positions.

With positions remaining relatively unchanged throughout the race it wasn‰Ûªt until lap six, that the battling front pair went toe to toe, which eventually saw Levy snatch the top spot from a hard charging Alderson. Mahaffay also swapped positions with Lynch which relegated him to fourth, while Hayes sat behind in fifth position.

However, Alderson was determined not to finish today without a victory, manoeuvring his machine around Levy to cross the finish line in first place at the conclusion of race one. Levy managed to hold on to finish in second position, while Mahaffy fought to also make a last minute move on Hayes to finish in third. Hayes and Lynch then finished race one in fourth and fifth places respectively.

When the Club Challenge bikes hit the track this afternoon, the changing conditions proved difficult to manage and not long after racing got under way, a crash forced the race to be red-flagged. When the race was re-started, the Club Challenge class was reduced to five laps.

When racing eventually got underway, it was Colin Lewis who manouvered his way to the front, and then went on to take the opening Club Challenge Class victory. Second place was awarded to Simon Rees, followed by Robbie Tesoriero who crossed the finish line in third.

All four classes will now battle it out again tomorrow, in two more races for Round 3 of the Yamaha Motor Finance Australian Superbike Championship presented by Motul Pirelli, with what is tipped to be an even bigger and better battle than what was witnessed today.

For more information on the 2016 Yamaha Motor Finance Australian Superbike Championship presented by Motul Pirelli, head to www.asbk.com.au or like ‰Û÷ASBK‰Ûª on Facebook for live race results, as well as all of the latest news on racing this weekend.