ASBK support classes impress at Round 4 in Western Australia 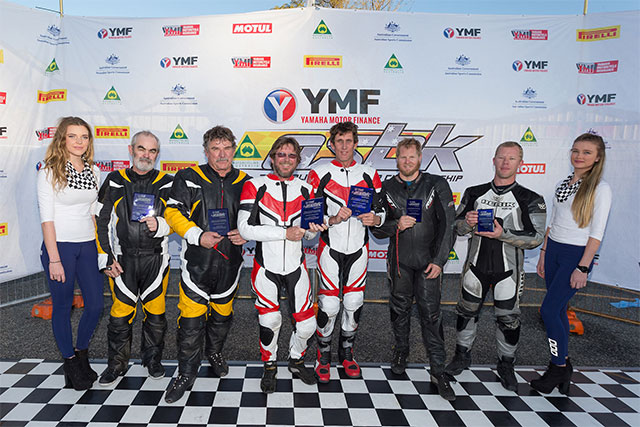 Thousands of spectators turned out at Barbagallo Raceway yesterday, not only to watch Australia‰Ûªs biggest road racing stars in action, but to throw their support behind the locals in the Club Challenge and Sidecar Challenge categories, at Round 4 of the Yamaha Motor Finance Australian Superbike Championship presented by Motul Pirell.

The Club Challenge C&D Grade riders were the first bikes to hit the track yesterday ‰ÛÒ the huge class of 31 bikes, all setting the scene for what was a huge Round 4 of the Yamaha Motor Finance Australian Superbike Championship presented by Motul Pirelli at Barbagallo Raceway.

After an exciting race one on Saturday where BPR Racing‰Ûªs Scott McCue streamed to victory, race two in Western Australia shaped up once again to be a win for the Kawasaki rider.

Despite Honda rider Kristo Raam initially leading the way, when the chequered flag flew on race two for the Club Challenge C&D class, 1000cc rider McCue had reason to celebrate, taking the win from Max James-Beatsonbell in second, while Anton Jones wrapped up race two in third.

In the 600cc category for the Club Challenge C&D class it was Velocity Race Team‰Ûªs Nick Favazzo who secured the first victory of the day on Sunday, followed by Pascal De Roche and Andrew Smiles.

In race three, once again it was McCue who shot off in to the early race lead, and after only two laps had pulled an impressive two second gap on second placed Ash Jennings (Suzuki), and third placed Jones.

With McCue well out in front, the fight for positions were left to happen behind him, and before long Jones made his move on Jennings for second position, while Neil Fraser followed suit passing the Jennings Suzuki for third.

And when the chequered flag flew, that‰Ûªs exactly where the riders finished ‰ÛÒ 1000cc rider McCue collecting his third race victory for the weekend, followed by Jones (BPR Racing) and Fraser (SKB Racing) who finished race three in second and third places respectively.

In the 600cc category it was Western Australian Eddie Kirrane who took the win in race three, while De Roche and Favazzo wrapped up the final Club Challenge race in second and third places respectively in the 600cc class.

When results were calculated from three races, McCue went undefeated and concluded the round with the 1000cc victory ‰ÛÒ second on the Club Challenge 1000cc podium was Jones, followed by Fraser who collected third.

In the 600cc category, Favazzo‰Ûªs consistency paid off, rewarding him with the round victory, while De Roche and Phil Burke completed the 600cc podium in second and third places respectively.

Sidecar competitors had the opportunity to race for a full house at Barbagallo yesterday, with thousands of spectators flooding the venue to cheer on Australia‰Ûªs fastest riders.

When race two got underway for the Sidecar drivers, all eyes were on duo Murray Stronach and Steve Marshall who had showcased the incredible power of their Kawasaki machine when they took the win in race one on Saturday.

In the final race for the Sidecars it was a familiar result for duo Joyce and Blackman, who applied the pressure when required and passed the likes of Stronach and Marshall to secure their second victory for the weekend.

With Jero and Joyce‰Ûªs victorious performance, Stronach and Marshall were forced to settle for second position in the final race of the day, while Evans and Scott raced their Hanger Racing Kawasaki to another third.

Fourth in the final race was Rod Walker and Kevin Webb, followed by Darryl McLeod and Gabrielle Watson who wrapped up the final appearance for the sidecars in fifth place.

After three races, Joyce and Blackman‰Ûªs 2,1,1 results saw the duo awarded with the top step on the podium, followed by locals Stronach and Marshall who collected second, while Evans and Scott rounded out the podium in third.