Arnaud Tonus to miss the MX of Nations 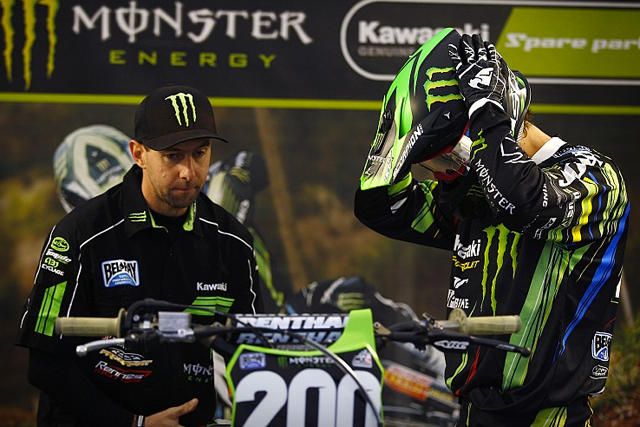 After his strong comeback during the last two Grand Prix, Arnaud Tonus will miss the upcoming Motocross of Nations.

The 2013 year will be definitively a season to forget for the likeable Swiss rider, who attended only the Grand Prix of Great Britain and Lierop this season and will not be able to defend the Swiss colours at the Motocross of Nations in Germany in two weeks time.

The positive news is that Arnaud doesn‰Ûªt suffers from any new injury, but he has to follow his body which didn‰Ûªt reacted so well to the hard training program that the CLS Kawasaki rider followed to prepare his come back.

‰ÛÏWe all know the qualities of Arnaud, and when his doctor gave him the permission to go training again he never really stopped working to be fit as soon as possible." explained team owner Jean Jacques Luisetti who asked Arnaud to rest for a few weeks.

"Between the GP‰Ûªs of Great Britain and Lierop he spent two weeks on sandy tracks, training every day, and after two strong races on the most demanding track he feels some pain in his leg that he broke one year ago at the Nations.

"He visited again the doctors, and they saw that this leg is sore as he over trained. We don‰Ûªt want to take any risks as next season is too important for Arnaud and of course for the team and our partners, so we ask him to stay quiet during four weeks to recover.

"For sure it‰Ûªs not the best way to end the season as the Nations is a great event, but we want Arnaud to recover; he had a very tough year, but he knows that everyone in the team is behind him and just want to see him back at his best next season‰Û