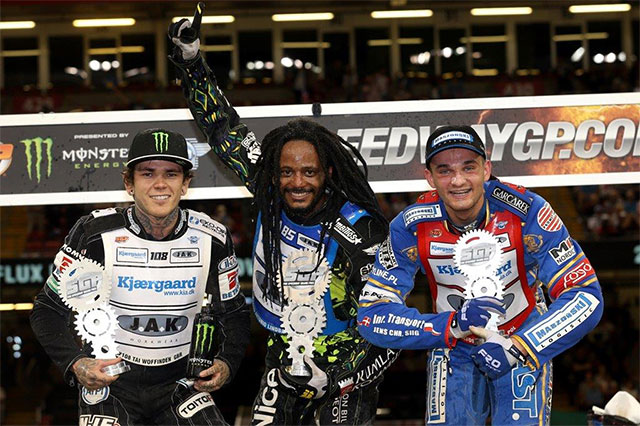 The Rio Rocket ended his near four-year wait for an SGP win after winning a titanic tussle with Great Britain hero Tai Woffinden in the final, with Poland‰Ûªs Bartosz Zmarzlik third and American icon Greg Hancock fourth.

Lindback was unbeaten in his opening three rides and powered into the semi-finals on 12 points. After a convincing win in his semi-final, he finished off the job in style, with Woffy in hot pursuit.

He is now fourth in the World Championship on 53 points; just one short of Jason Doyle in third and 13 behind series leader Greg Hancock.

The Grudziadz and Indianerna star worked hard on his focus and mental approach ahead of his return to the SGP series this year.

And Lindback insists he and his team only had success in their sights in Cardiff.

He said: ‰ÛÏI have felt a little bit frustrated in the GPs. It seems like I have a really good meeting and get to the semi-final, but I just miss the final.

"Today my whole team was so focused on making it. We worked so hard. I have everything to thank my team for. I‰Ûªm really, really happy.