Antonio Caroli Back On Top During German MXGP Qualifying 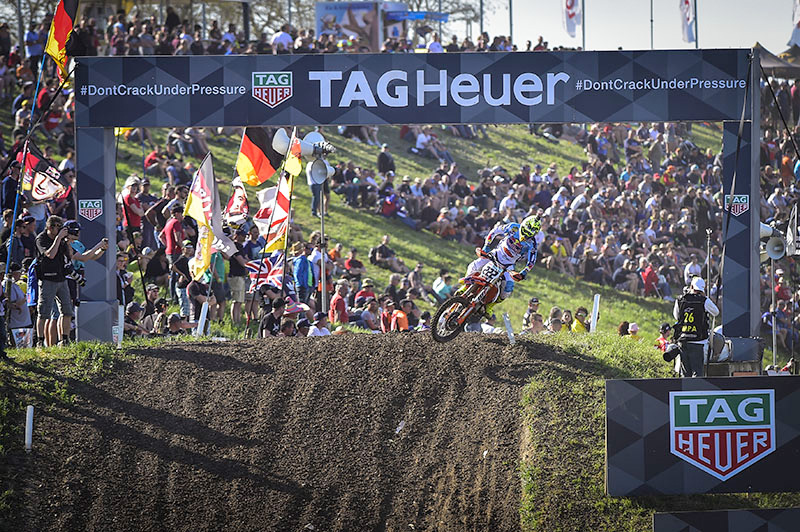 The recipe for long, deep ruts and great racing was revealed today with the traditional circuit of Teutschenthal shaping up gnarlier than ever for the qualifying races at the seventh round of the 2016 FIM Motocross World Championship.

The track was ripped mega deep through the week and saturated with water, which turned Teutschenthal‰Ûªs ‰Û÷Talkessel‰Ûª circuit into Rut City. Precision was of the essence in the technical conditions, which is what Cairoli is renowned for, although Gajser and Febvre have also proved in a short space of time that they can ride that way too.

Speaking of Gajser and Febvre, the battle between them is what has everyone hooked and once again, it was on full blast after the duo dropped Van Horebeek on the second lap. Both youngsters embrace the ‰Û÷win at all costs‰Ûª mentality, and there is definitely no love lost between the two, which always makes for epic racing.

With five minutes to go, Gajser flicked his map to animal mode, and set his sights firmly on Cairoli. As the Slovenian mixed up his lines in effort to get around the eight-time world champ, he broke traction, slid and clipped a rut, which chucked him off. Febvre inherited second and put a sniper dot right smack in the middle of Cairoli‰Ûªs back.

With two laps to go, Febvre had his finger firmly on the trigger as he tried to muster the strength to pull it. Every time he tried, he‰Ûªd bobble and eventually he had to settle for second while Tony Cairoli finally got the monkey off his back with his first race win of the season.

Gajser remounted and held on for third ahead of Van Horebeek and Rockstar Energy Husqvarna Factory Racing‰Ûªs Christophe Charlier who took his second ever top five, with his first being at the MXGP of Lombardia, Italy, last year. 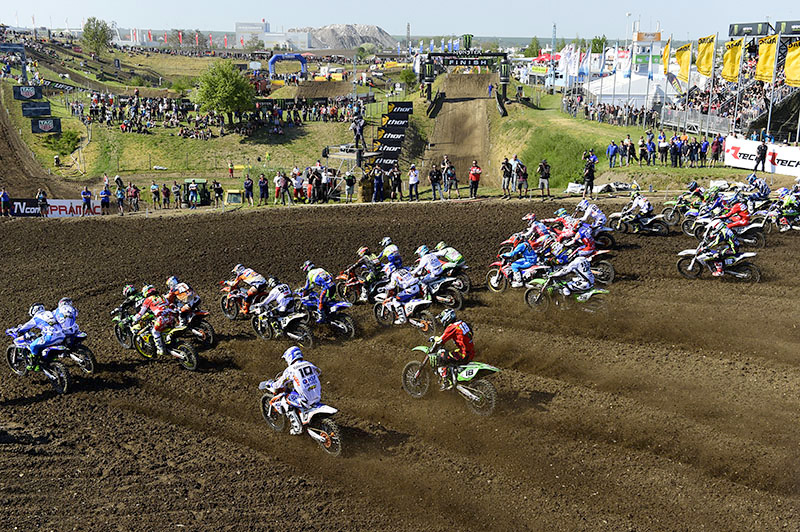 When the gates slammed down on the German clay it was Monster Energy Kawasaki Racing Team‰Ûªs Dylan Ferrandis who proved he had lost no flexibility in his right wrist as he twisted the throttle as far round as possible all the way to turn one for the holeshot.

Behind the Frenchman, who has been on the couch for the majority of the season with a shoulder injury, was Red Bull KTM Factory Racing‰Ûªs duo of Jeffrey Herlings and Pauls Jonass.

Surprisingly, The Bullet wasn‰Ûªt the fastest in Timed Practice; it was Team Suzuki World MX2‰Ûªs Jeremy Seewer who chalked that one to the board for the first time this season. Maybe it was just another sign of Herlings all new race maturity because the MX2 star didn‰Ûªt waste any time in taking the lead and checked out to win his seventh straight qualifying heat by fourteen seconds. 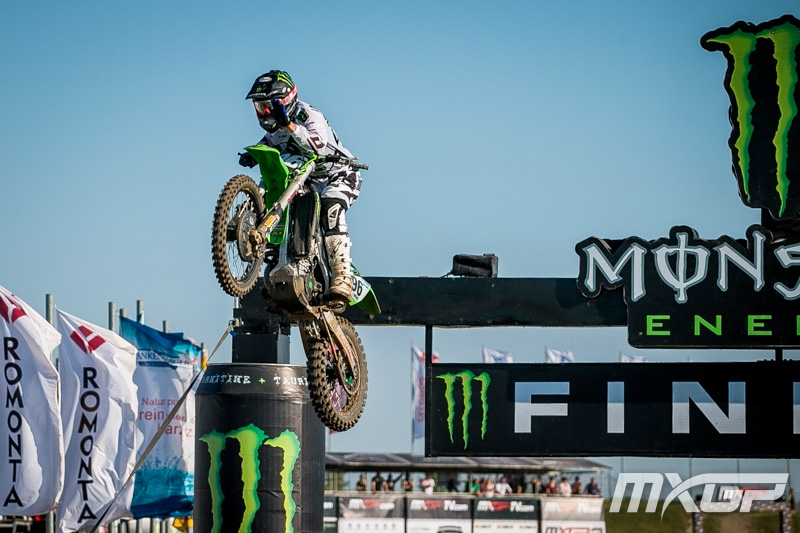 There was a massive turn of events in the WMX world championship with the red plate holder Altherm JCR Yamaha‰Ûªs Courtney Duncan crashing out of the lead. Team One One Four‰Ûªs Livia Lancelot capitalized on Duncan‰Ûªs misfortune and took her first race win of the season and now has a 6 point lead in the championship over Yamaha‰Ûªs Nancy Van de Ven.

Duncan was able to remount and finish the race in 12th position and now sits 3rd in the championship standings, 9 points from the lead.

Meanwhile, Monster Energy Kawasaki‰Ûªs Australian, Hunter Lawrence, put a smile back on the faces of those down-under with his first ever EMX250 race win. 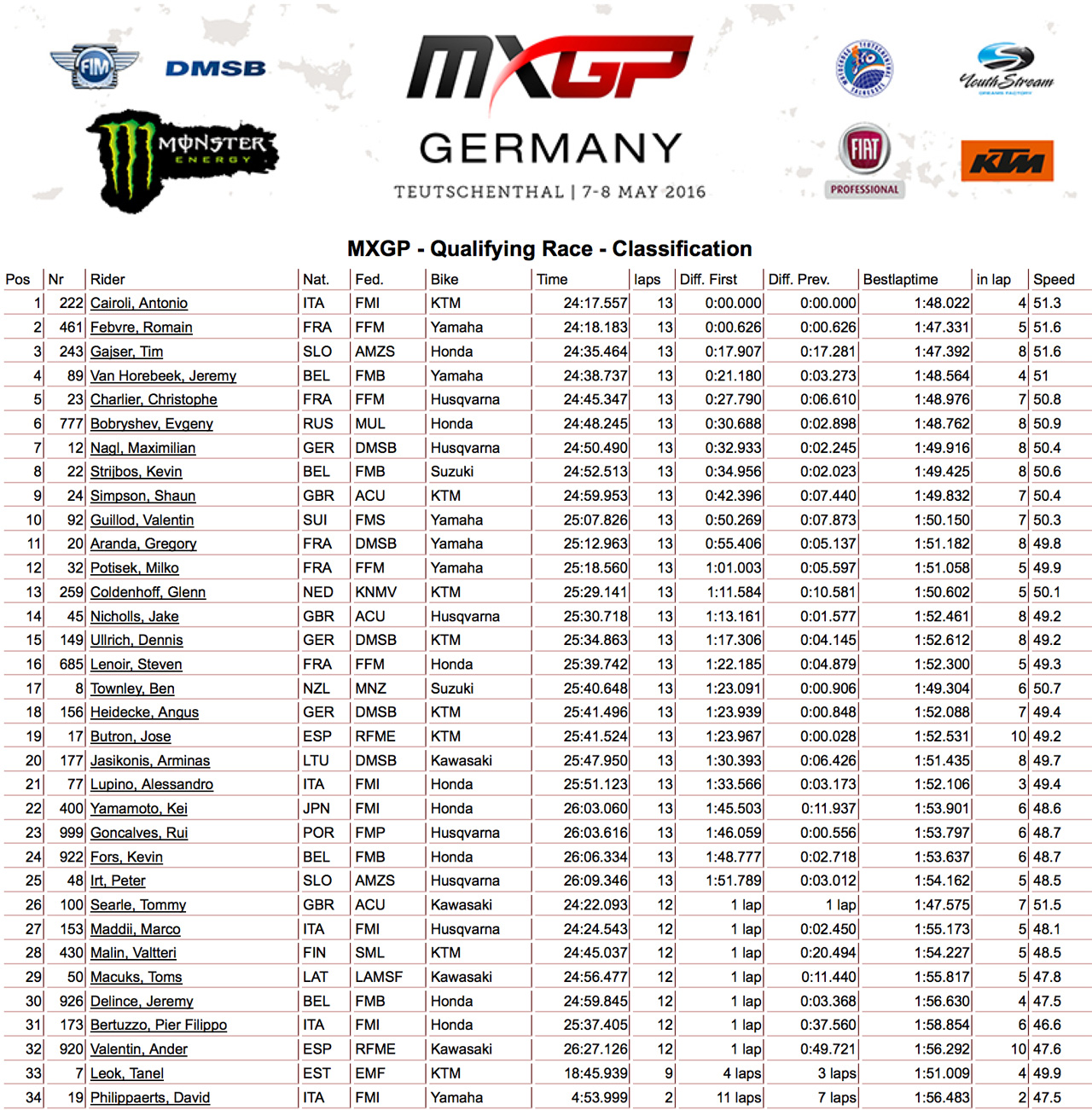 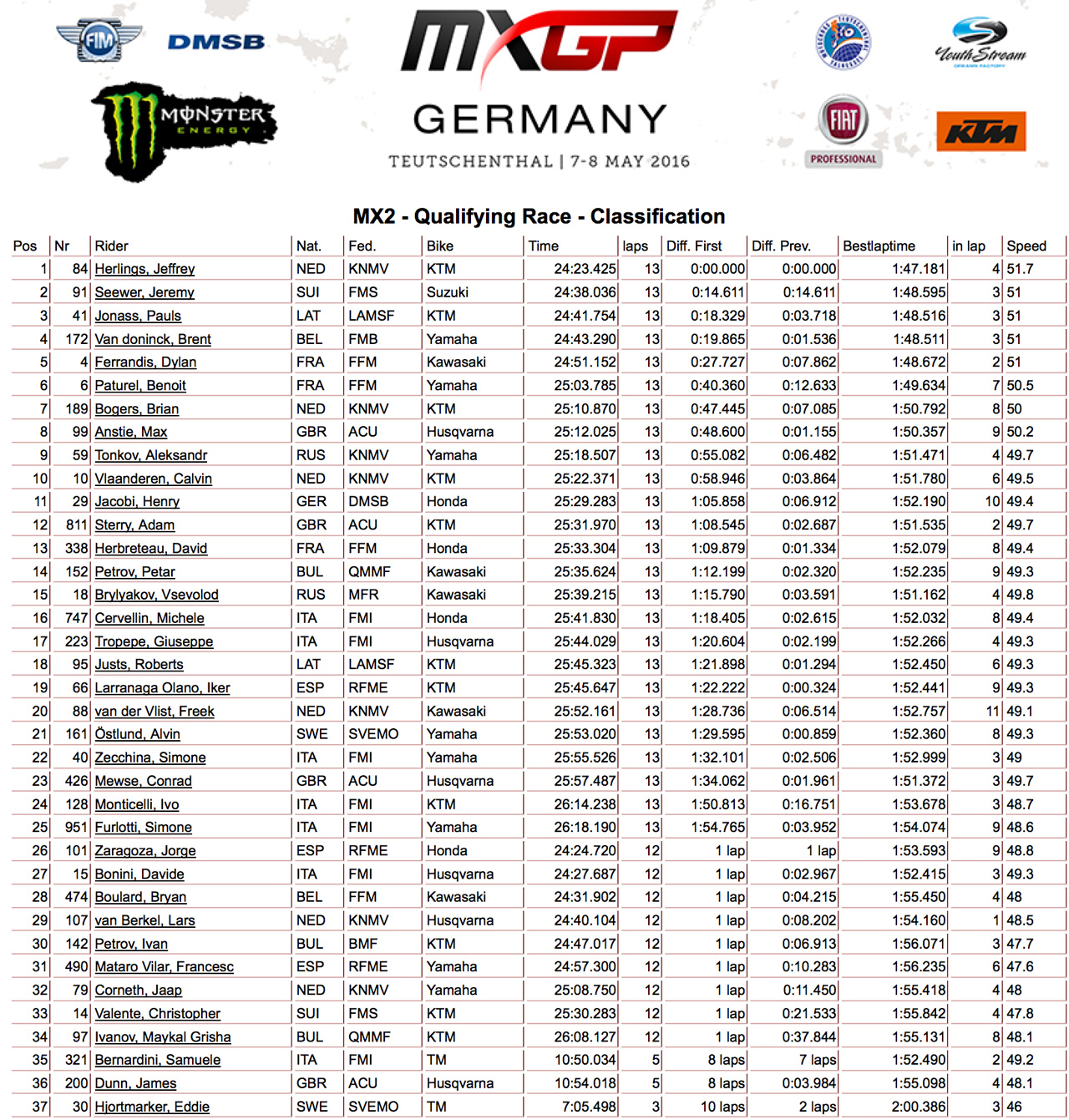 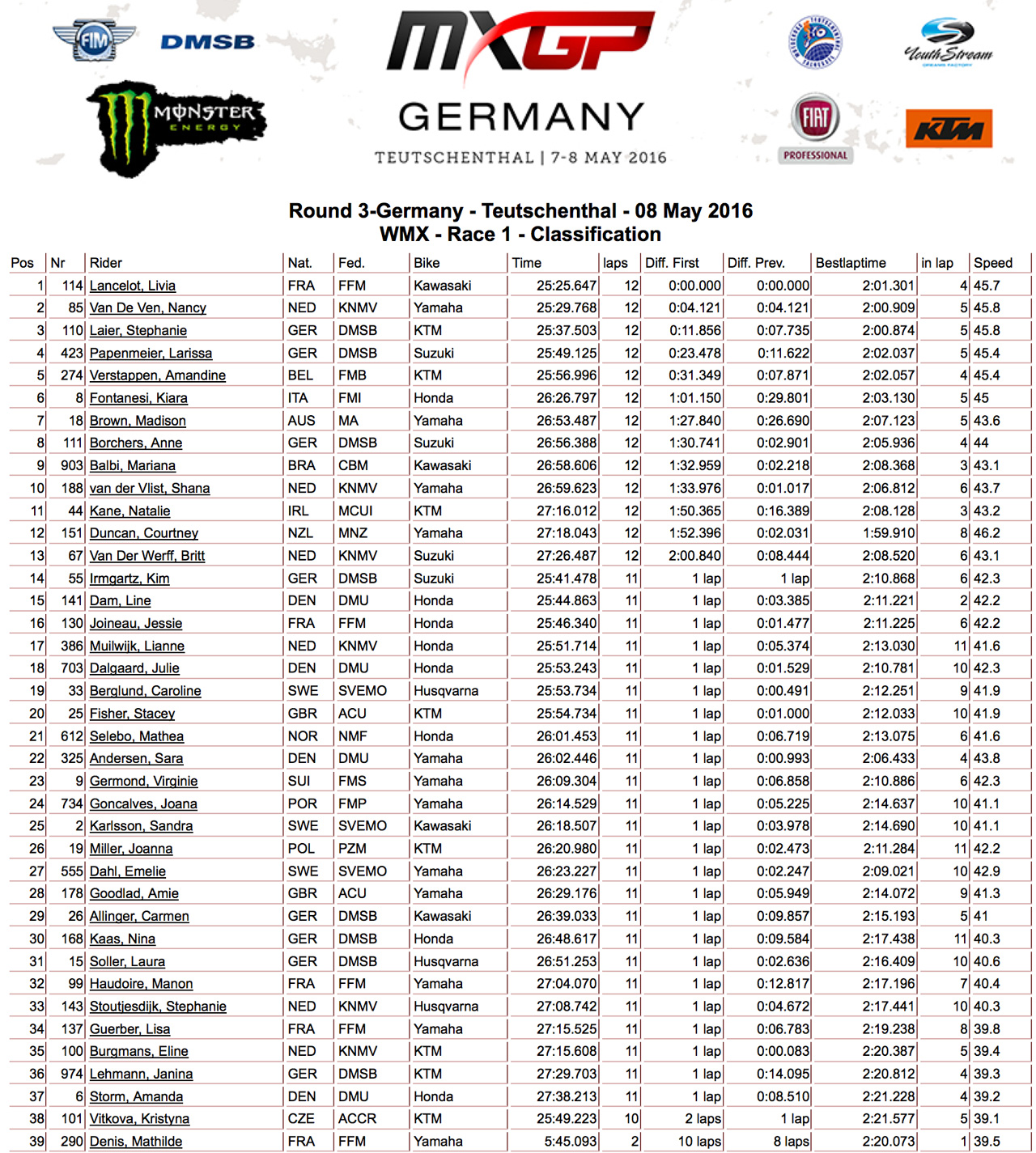 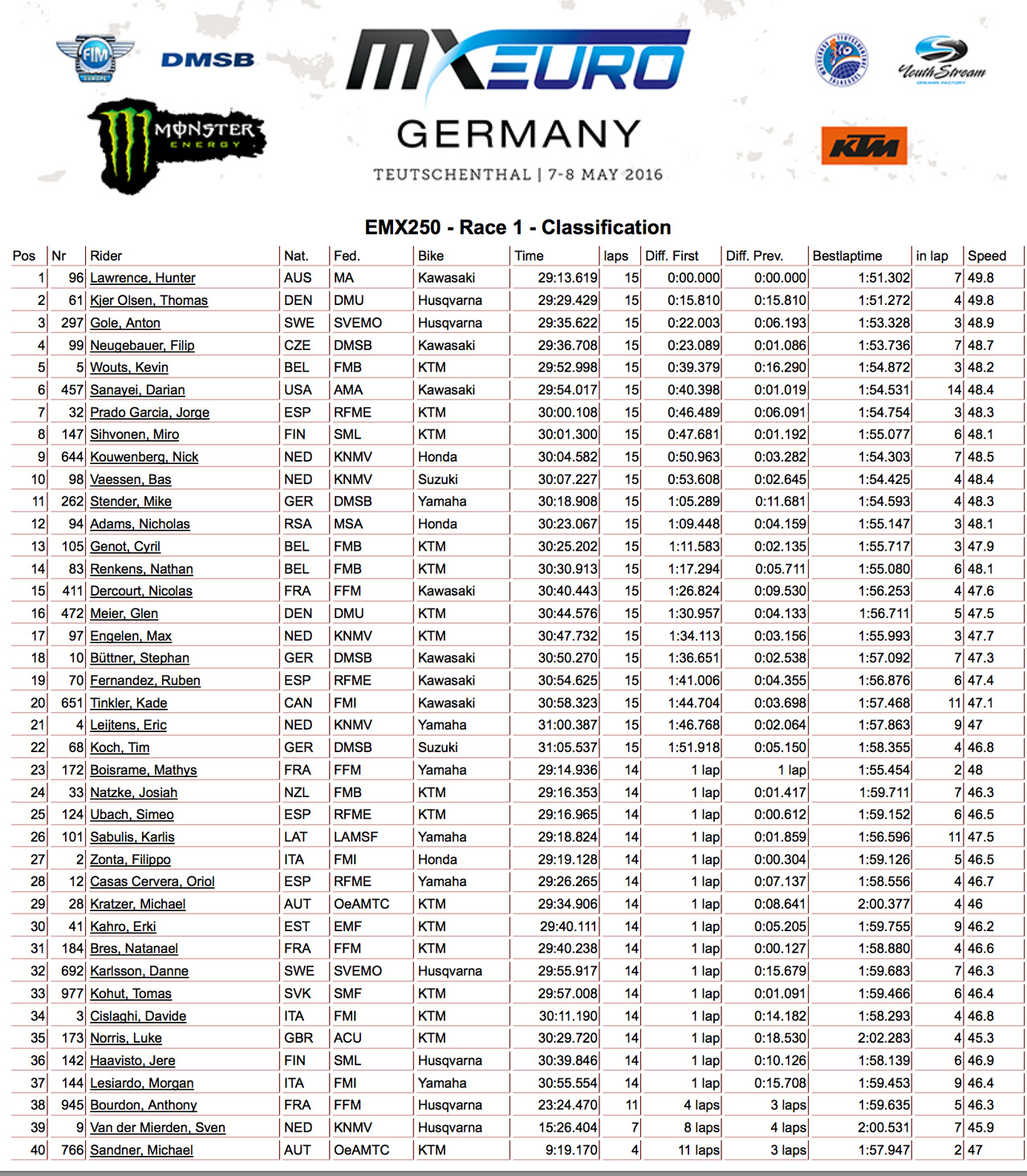