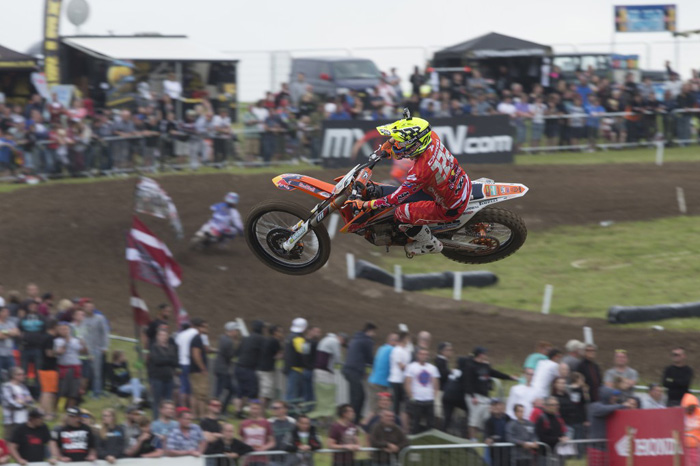 The typically rutty and spongy track of Matterley Basin shaped up a lot harder, faster and slicker than it had in years prior which was taken in the strides of Red Bull KTM Factory Racing‰Ûªs Antonio Cairoli and Standing Construct Yamaha Yamalube‰Ûªs Valentin Guillod, who both nailed their second consecutive grand prix victories of this season.

Winning the MXGP of Great Britain today meant Red Bull KTM Factory Racing‰Ûªs Antonio Cairoli has become the most successful grand prix rider on British soil. The Italian eight-times world champion has now won six British grand prix, which puts him ahead of the Belgian greats Stefan Everts and Joel Robert, who have both only won five.

‰ÛÏIt was amazing today, England has given me a lot of good memories." Cairoli said. "I am really happy I made the decision to move to the 450cc, it makes it much easier for me to keep up with these guys, so for me the weekend went perfect, I wouldn‰Ûªt change anything.‰Û 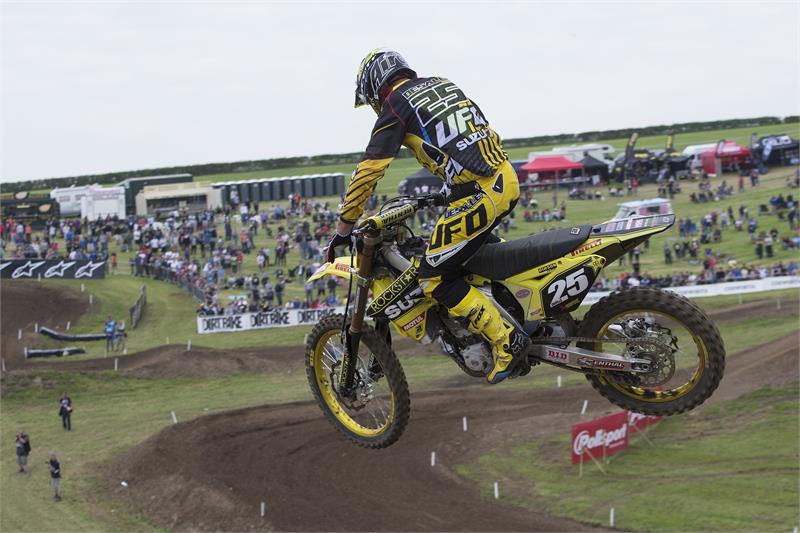 Clement Desalle moved back to with in four points of the championship lead with his second place result - Credit: Suzuki
As the most consistent rider in the championship with seven from six possible podium finishes, it was another narrow and frustrating loss for Rockstar Energy Suzuki World MXGP‰Ûªs Clement Desalle, who claimed two consistent second places for second overall. 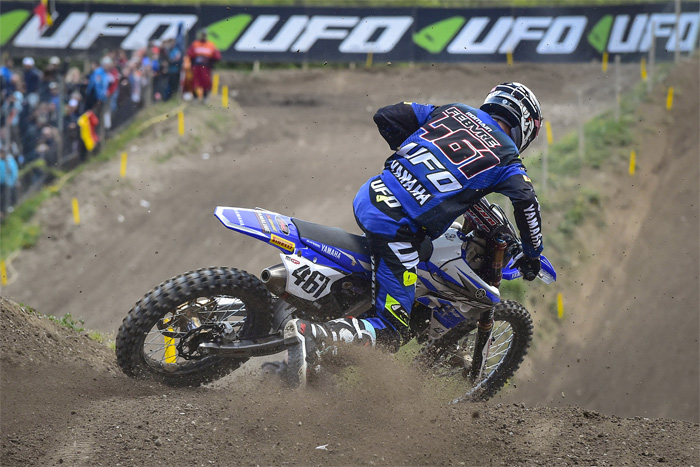 Rookie Roman Febvre who claimed his first MXGP race win and second consecutive podium finish today at Matterley Basin.
Also showing some impressive speed today was Team HRC‰Ûªs Evgeny Bobryshev. Russian Bob is clearly back on the rise which was obvious with his solid lap times today. Despite not getting off to the best of starts, the Honda rider still managed to put in two remarkable rides for fourth overall.

Red Bull IceOne Husqvarna Factory Racing‰Ûªs Max Nagl appeared to struggle to find his flow out on the slick and tricky surface of Matterley Basin. Despite getting good starts, the red plate holder just had to do his best to take as many points as possible, which he managed with fifth overall.

Thanks to the British fan favorite Hitachi Construction Machinery Revo KTM‰Ûªs Shaun Simpson, the crowd was bought to life today when he took the holeshot and fronted the field for a good part of race two. The public lined the fences and showed an immense amount of support for the Brit who put in a remarkable ride to wrap up his home grand prix in sixth overall.

For the Australian duo of Todd Waters and Dean Ferris, it was another round of mixed results. Waters scored a top ten finish in the opening moto finishing in 9th before a 16th in the second race left him 11th overall for the round. Ferris who finished 8th in Saturday's qualifying race had to settle for 17th overall on the back of 13th and 18th moto finishes. 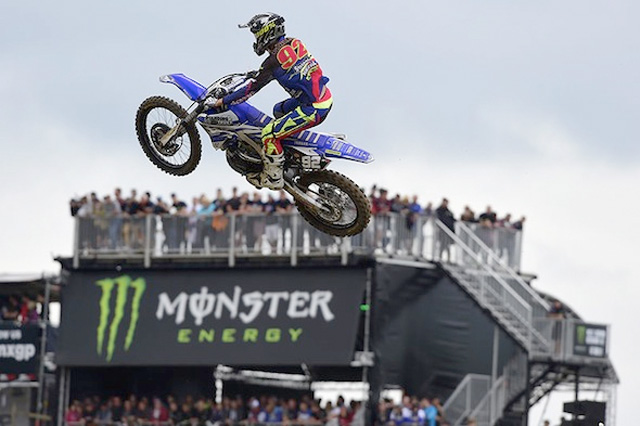 ‰ÛÏIt was so fun out there, I was just having a lot of fun and the fans were having fun and my team was having fun, so it was just really cool.‰Û 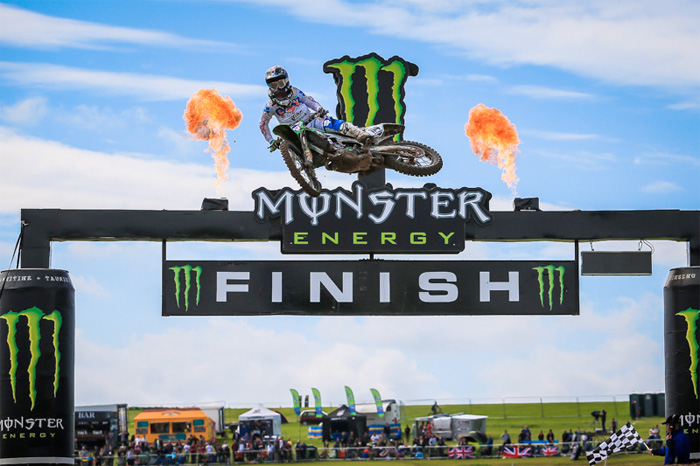 When the gates dropped under the clouded skies today, it was the former five times WMX world champion Stephanie Laier who took her second holeshot of the weekend but was quickly passed by yesterday‰Ûªs race winner and the new championship leader Team One One Four‰Ûªs Livia Lancelot. Lancelot, the 2008 FIM Women‰Ûªs Motocross World Champion, was on a whole other level this weekend and blitzed everyone for her second double race victory of the season.

Yamaha MXFontaracing‰Ûªs Kiara Fontanesi was around fifth around turn one but managed to slam her Yamaha into the second position before the end of lap two. Laier tried to respond but eventually lost site of the defending champion and was forced to settle for third.

Back in fourth Yamaha‰Ûªs Nancy Van De Ven was in a killer battle with Honda‰Ûªs Natalie Kane, but was soon gifted that position when Kane stalled her engine mid-race. With Kane struggling to fire her bike back up, Australian Maddison Brown happily took over fifth.

At the end of the weekend, Team One One Four‰Ûªs Livia Lancelot placed a firm grip on the championship with two unchallenged race wins for the overall victory ahead of Stephanie Laier and Nancy Van De Ven who both stood on the podium for the first time this year.

Australia's Meghan Rutledge was absent from the race due to injury with Kawasaki stating in their press release that she is unlikely to return to the MXGP circuit for the remainder of this season.

Livia Lancelot now leads the championship by twenty-three points over the three times FIM WMX World Champion Kiara Fontanesi and will carry the red plate next weekend at her home round in Villars sous Ecot, France.

Top Image: Antonio Cairoli tightented up the points chase with a win at Matterly Basin