Stage eight has proven to be one of the toughest of the 2018 event. As the second leg of the rally‰Ûªs first marathon stage, riders were unable to receive any team assistance overnight and rode today‰Ûªs 498km timed special with day-old tyres. The wet and slippery conditions called for supreme technical skills on the bike, good navigation and yet more mental strength in order to complete another challenging stage. 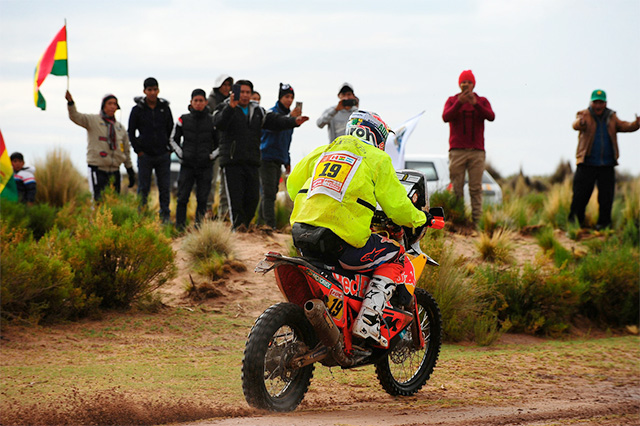 Antoine Meo took the stage 8 win by just over a minute, Credit: PhotosDakar.com - KTM Media Library
Setting off ninth this morning at 6.39 AM, Antoine Meo was able to chase down the pack in front of him right from the start. Meo led on time through the first six waypoints with a small mistake then causing him to drop down to second. Pushing hard for the final 100km, the Frenchman took the win at the finish by over one-minute from runner-up Ricky Brabec.

"I am really happy with my performance today," Meo enthused. "Right from the beginning my plan was to push and try to regain some time on the leaders. I felt really good today, despite the conditions and the length of the special, I didn‰Ûªt make any mistakes. With tomorrow‰Ûªs stage cancelled it puts me in the unfortunate position of having to open Tuesday‰Ûªs stage in the dunes of Argentina. It is always a slight disadvantage to open stages like that, but I‰Ûªll do my best and see where I can finish.‰Û 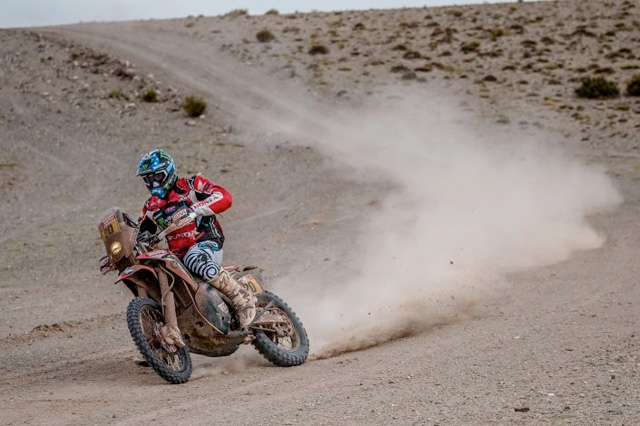 American Ricky Brabec finished second of the day
One of the riders of the Monster Energy Honda Team grabbing a lot of attention was American Ricky Brabec who finished second of the day. The Californian appeared at ease in terrain very similar to what he‰Ûªs used to in the American Bajas, keeping a ferocious pace throughout the day. Brabec‰Ûªs endeavours allow him to climb to eighth overall.

"We have finished this second part of the marathon, in which we weren‰Ûªt allowed to receive any assistance. The type of stage today was very similar to the races we have in California and I felt very comfortable, much more than yesterday, which was horrible for me, because I'm not a rider who likes mud," Brabec explained. "Today there were fast tracks and off-piste. The end of the special was good, battling with Antoine MÌ©o. We will continue fighting over the next five days. Every year of the three in which I‰Ûªve taken part in the Dakar, stages have been cancelled, which is nothing new. If it's for our safety, that‰Ûªs good." 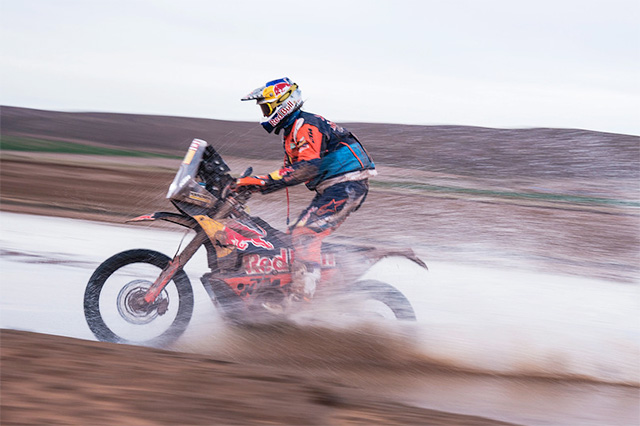 "It‰Ûªs been a really long marathon stage ‰ÛÒ yesterday was 430km and today was 490km ‰ÛÒ the two longest of the event. I‰Ûªm feeling a little bit sore after racing for nearly 1,000km but apparently we have another rest day tomorrow due to the stage being cancelled," Price said. "I‰Ûªm not complaining, I could certainly use the time to recharge, but everyone gets the same break and will be fired up and ready to go again on Tuesday. All-in-all, I‰Ûªm feeling good and the bike is awesome. I know the stages in Argentina are going to be tough and there are still a lot of kilometres to cover, but I‰Ûªm in a good position and not had any issues. The idea is to just stay focused and keep doing what we‰Ûªve been doing.‰Û 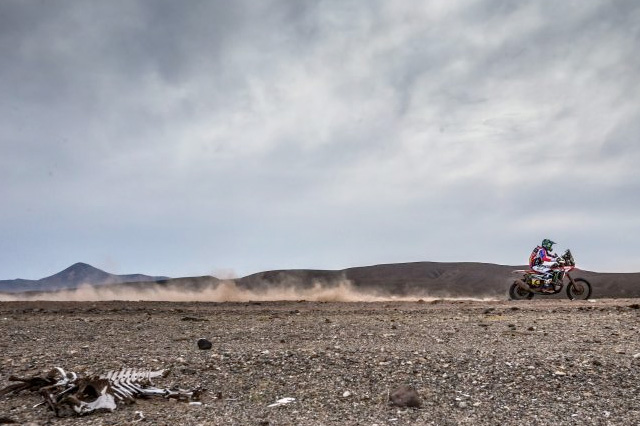 Monster Energy Honda Team's Kevin Benavides remains less than half a minute away from the overall lead with 4th on today stage
fourth placed Kevin Benavides too, was the centre of attention, given that after today‰Ûªs performance, the Argentine is a hair‰Ûªs breath away from taking the overall leadership, with just 22 seconds separating him from the leader Adrien Van Beveren. Kevin caught up with the Frenchman during the special and whittled three minutes off his advantage. The Argentine will certainly need no pepping up tomorrow as the rally reaches the rider‰Ûªs hometown of Saltas with hundreds of fans lining the route to cheer on the local hero.

"It's been a good day," Benavides reflected, "I started third and within a few kilometres I found myself opening the track with Adrien [Van Beveren], so we practically rode together all day. We were joined by Toby Price and Joan Barreda, who had gotten lost and found us. We finished in a pack. I was holding back a bit, knowing that I could not make much of a difference. I'm happy about that. Tomorrow we ride to Salta, my hometown; I really want to see my people, my family and recharge my batteries."

KTM's Stefan Svitko continues his good form in the 40th edition of the Dakar with a solid performance and a handy 5th place on today's stage.

Starting sixth this morning, Matthias Walkner maintained his position for the stage. The solid ride was enough for Walkner to move back up to third in the provisional overall standings, just one-minute ahead of his team-mate, Toby Price.

"That was a really tough couple of stages," Walkner reflected. "Yesterday we had a 300km liaison and the temperature was only two or three degrees. All the water on the timed special made it very dangerous to push as hard as I would have liked. Today the stage was not too bad, I lost a little time in one section, but managed to get that back at the end. The worst thing was for the entire 500km or so, I was riding on my own and that makes it difficult to push yourself to a good result. Nevertheless, I didn‰Ûªt make any mistakes and my finish was good so I am happy. Looking forward to Argentina, hopefully the stages will be fast WRC-style pistes ‰ÛÒ I do a lot better on that type of terrain and I think I can really start to push then.‰Û 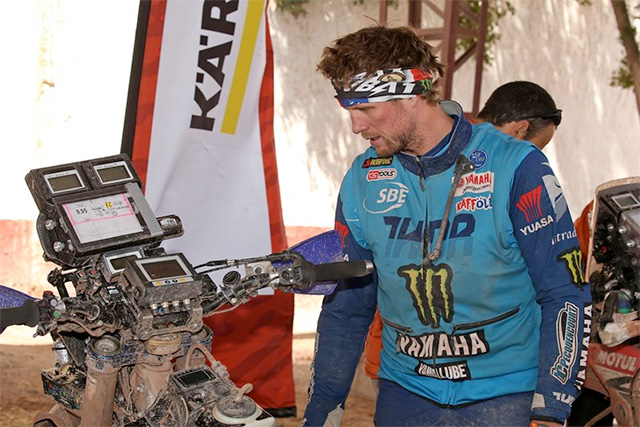 Yamaha's Adrien Van Beveren still holds the overall lead despite finishing 7th on the stage
Sticking to his well-calculated plan of attack, overall leader Adrien Van Beveren rode a smart stage eight of the rally. Assigned with the demanding task of opening the tracks on several occasions during the timed special, the Frenchman brought his Yamaha home in seventh position on Sunday. Meeting his team in Tupiza for the first time after two days, Adrien will now have the chance to regroup and get ready for the remainder of the rally.

"It is great that we keep the lead at the end of this extremely difficult marathon stage," Van Beveren said. "The rain, the mud and the high altitude made things really hard for us these last two days. It was really exhausting physically but I managed to get two good stage results. Yesterday I was second and then today I pushed hard and managed to stay close to the leading group. For big parts of the special stages yesterday and today I found myself opening the tracks. I am feeling great so far on my bike and I also have a great feeling with my navigation. I can be fast while also avoiding navigational mistakes and that is crucial for the coming stages as well. I feel that I've put the pieces of the puzzle together and now I know what I need to do during the coming stages."

Joan Barreda certainly deserves an honorary mention for his never-say-die attitude. Yesterday, in the marathon stage he took a bad fall, injuring his left knee yet still managing to finish the stage. When the race doctors failed to find anything broken, the Spaniard was given the all-clear to continue in the competition. Today Joan was forced to lead the field and battled hard against the pain to finish in eighth place, limiting the damage, and dropping 3‰Ûª16‰Ûª‰Ûª to the leader. Barreda now holds fifth overall position ‰ÛÒ a minute and a half away from a podium place in the Dakar.

" Over the first kilometres there was a part of dunes with vegetation and I suffered a little - it hurt me a lot," Barreda said. "Then the other riders arrived and we were able to finish the day without further problems. Now we need to see how the knee holds up, but without a doubt, the cancellation of the stage tomorrow will be a great help. Let's move on. We still have options with the desert stages and we will try to get the best out of our possibilities in this race."

For two-time Rally World Champion Pablo Quintanilla stage eight proved to be the most challenging so far in this year‰Ûªs Dakar Rally. Running eighth in the provisional overall standings, Pablo suffered a minor technical issue on the stage, which saw him finish 6:37:21 back in 40th and dropped him to an eventual 12th overall with almost half an hour to make up from here. 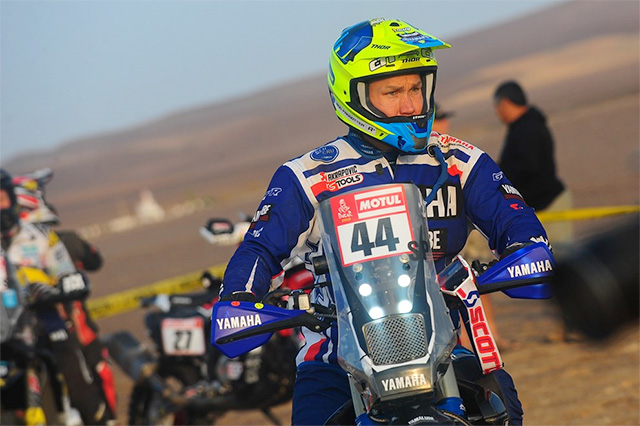 Rod Faggotter finished 25th and is 22nd overall.
A strong asset for the Yamalube Yamaha Official Rally Team, Rodney Faggotter remains well in contention for the top 20 in the provisional overall. Making use of his mechanical skills to assist his teammates in the marathon bivouac in Uyuni, the Aussie was back on his WR450F Rally machine on Sunday enjoying another steady stage performance. Finishing 26th on stage eight, Rod is currently 22nd in the provisional overall.

"This marathon stage was a test for all of us. I'm tired but happy I brought my bike home," Faggotter said. "Yesterday I lost time trying to help Franco get his bike out of the mud. Both these last two days have been really long and tiring. I'm glad to be here in Tupiza and my bike is running great so far. I've had a couple of small crashes but nothing major. My body is tired tonight but we have time to relax and recover some energy. Things are going pretty well for me this year. Unfortunately, we lost Franco yesterday and Xavier today. My thoughts are with Xavier now, as he tries to recover from his injuries."

Stage nine of the 2018 Dakar Rally was due to take competitors from Tupiza, Bolivia across the border into Salta in north western Argentina. The planned route included a lot of river crossings but due to the heavy rainfall of recent days leading to localised flooding, the stage has been cancelled. Riders are scheduled to recommence racing on Tuesday with stage 10.