Another podium finish for Todd Waters 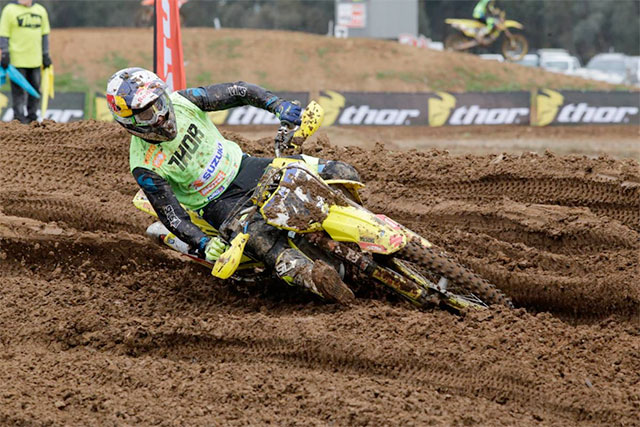 Wilson Coolair Motul Factory Suzuki‰Ûªs Todd Waters has once again finished on the Thor MX1 podium at an action packed Round 8 of the Motul MX Nationals at Shepparton in Victoria today.

In what was very close to a round victory, Waters showed impressive speed and technique on the technical and rutty Shepparton circuit.

Showcasing his consistent form, Waters again made an appearance in GoPro Superpole this morning where he collected an impressive second place with a 1:41.224 lap time, while Wilson qualified in 13th position.

In moto one, Waters put on a class act performance - biding his time and remaining consistent and smart, to take over the lead in the closing stages of the moto, eventually crossing the line and collecting the first race victory of the day. Despite the track forming up to be extremely challenging from the minute race one kicked off.

In race two, Waters was on the cusp of claiming a round win at Shepparton. However, when gates dropped, Waters was caught up with another rider off the start, which forced him to have to make up numerous positions, eventually clawing his way back to third place.

At the conclusion of the round, Waters was awarded with second overall on the Thor MX1 podium due to a countback, after finishing on equal points with the overall round winner.

‰ÛÏToday was a bit hard to swallow, especially finishing in second tied on points for the round overall,‰Û