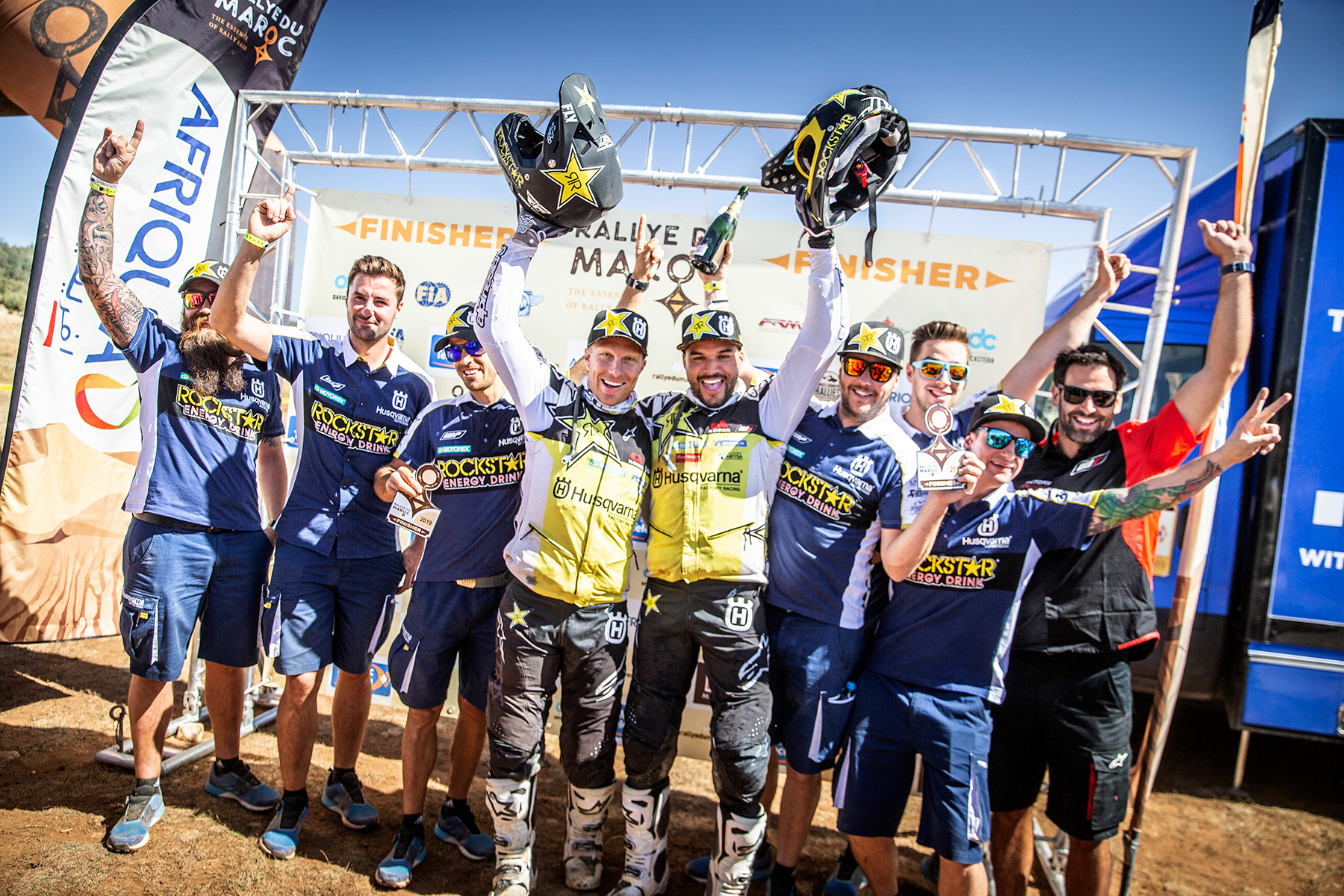 With a new style road book that riders often only received minutes before the start of each stage, the Rally du Maroc once again lived up to its reputation as one of the toughest events on the cross-country rallies calendar. Adapting superbly to the new regulations, Andrew Short made the most of his ever-improving skill and experience to put in a consistent ride that ultimately took him to the event win.

Following a strong showing in the race Prologue, Short made the best use of his strengths on the mixed terrain of the Moroccan desert stages, pushing hard when comfortable while maintaining a solid pace on the more technical sections. With navigation proving key to a strong result on all of the stages, Andrew rode intelligently to minimise any errors and successfully complete each stage in good time. 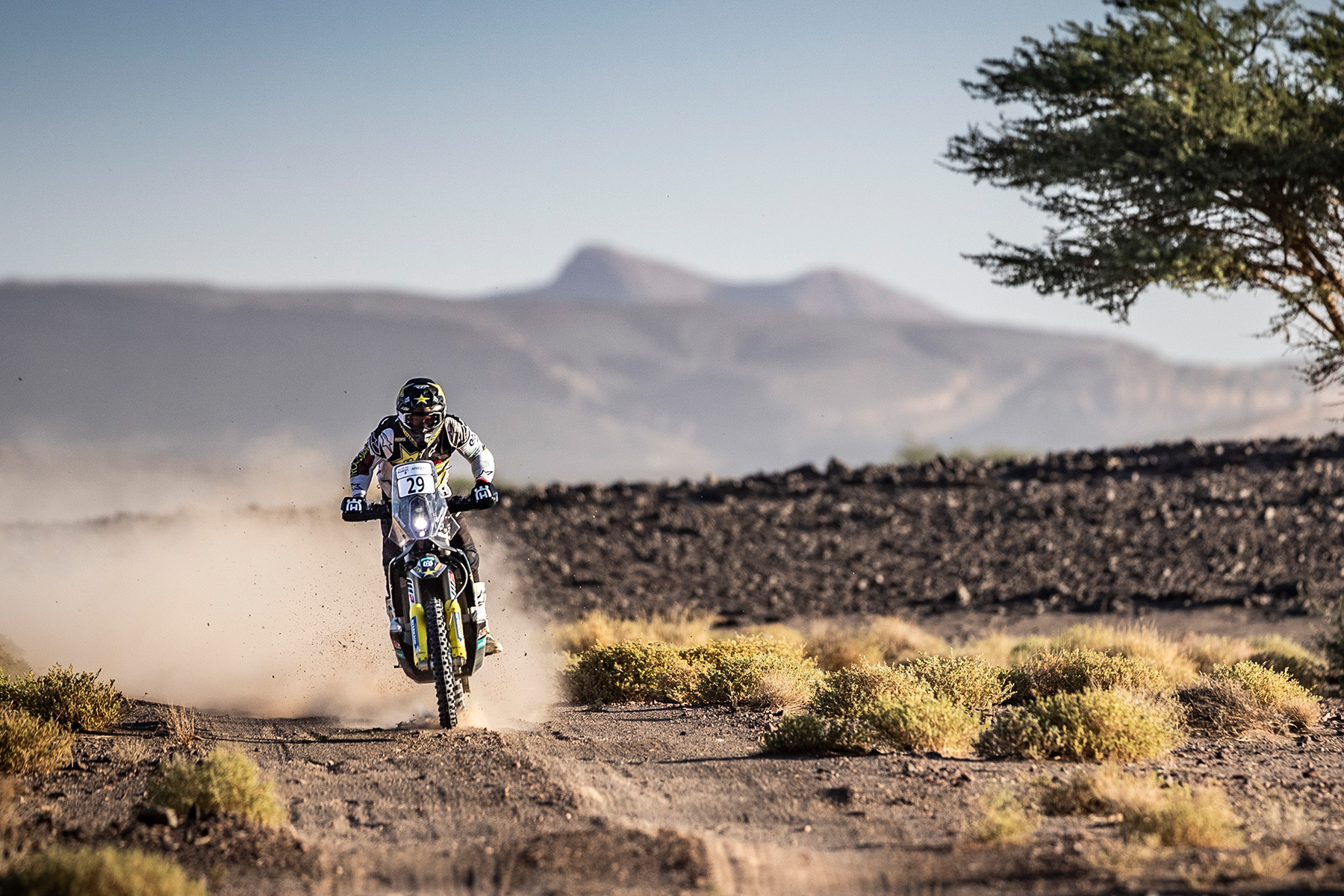 Andrew Short on his way to his first FIM Cross-Country Rallies World Championship win. Photo Marcin Kin
Leading the overall standings going into the final day of racing, Short knew he would still have to attack the 168-kilometre timed special to defend his position from the riders behind. A crash early on in the stage couldn‰Ûªt slow the American‰Ûªs progress and despite the added pressure of being one of the first riders on track the American put in another excellent ride to complete the stage in fifth. Coming into the rally with the goal of securing second place in the overall 2019 championship standings, Short not only accomplished that but claimed his first world championship victory and confirmed his place amongst the sport‰Ûªs very best riders.

‰ÛÏI can‰Ûªt believe it ‰ÛÒ it doesn‰Ûªt seem real right now. My main goal coming to Morocco was to finish second in the championship, but to take the win feels unreal," Short said. "I was second at the Silk Way, which was huge for me but there were a few of the top riders missing. Now all the guys are here at this event getting ready for Dakar and to take the win with such stiff competition is amazing. I couldn‰Ûªt have done it without the support of the team and the opportunity they have given me over the last couple of years.‰Û 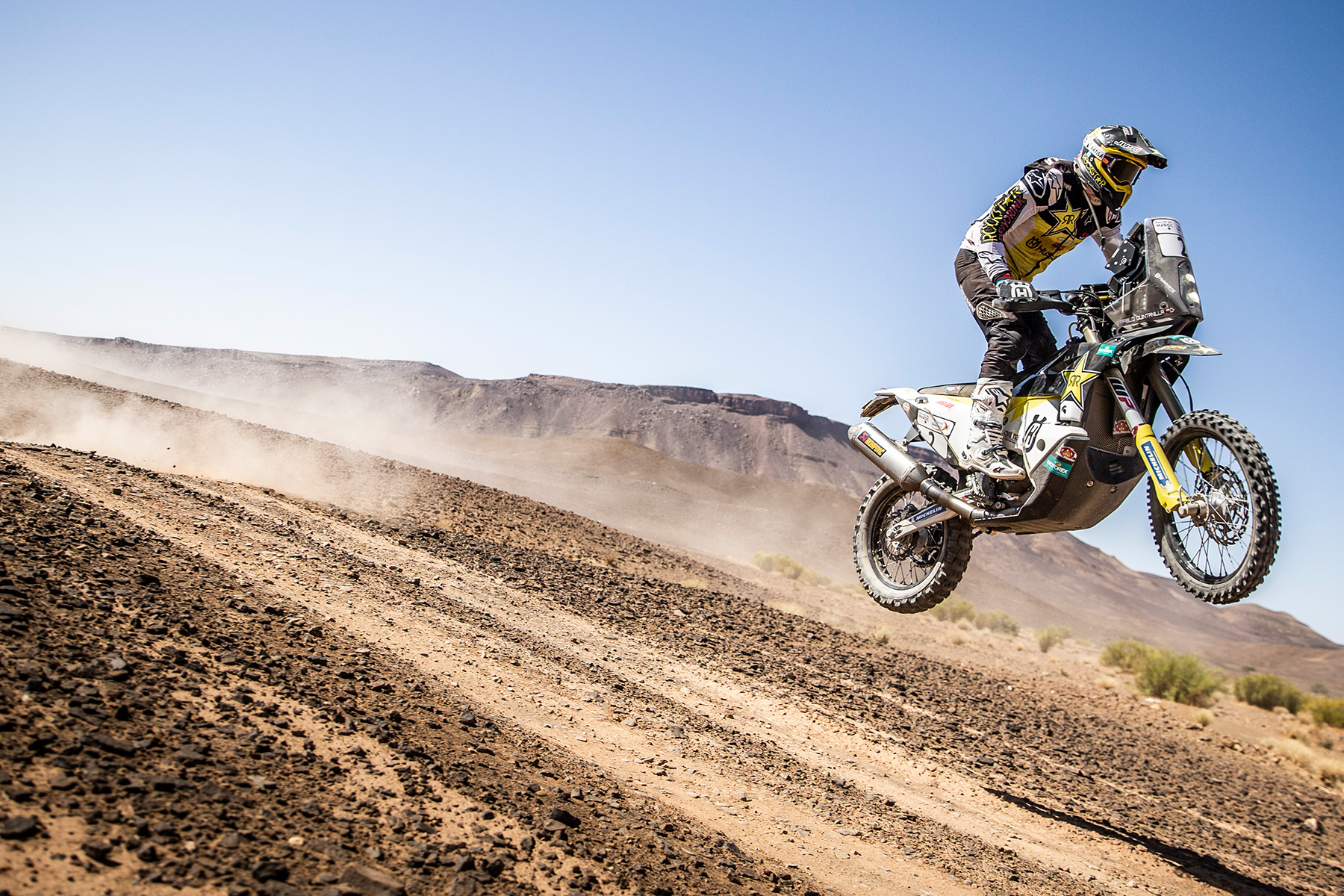 Former champion Pablo Quintanilla was runner-up. Photo Marcin Kin
Second overall to Short coming into the final day, Pablo Quintanilla was only 28 seconds behind his teammate as they took to the long 456-kilometre stage. Pushing hard and trying his best to make up the small gap, the Chilean star couldn‰Ûªt quite match the pace of his hard-charging teammate. Ultimately posting the sixth-fastest time on the gruelling stage, less than one-minute behind Andrew, Quintanilla claimed second place in the overall event standings.

Despite spending the majority of the 2019 season recovering from the injury he sustained at the 2019 Dakar Rally, Quintanilla immediately demonstrated his incredible pace on his return to competition by winning round three of the series ‰ÛÒ the Atacama Rally in Chile. Backing up that performance with second place in Morocco just one month later, the two-time Rallies World Champion has shown he is now back at his best and will undoubtedly be aiming to take his Husqvarna FR 450 Rally to his first ever Dakar win next January.

‰ÛÏThe race was really good for me. I hurt my leg right at the beginning, which slowed my pace a little but after getting used to the new style of road book I found I was able to put in some good times," Quintanilla explained.

"In the end I finished second, which I am really pleased about as it‰Ûªs only my second race of the year. It shows the work we have been doing with the team and also preparation with the bike is really paying off. I‰Ûªm also really happy for Andrew for getting his first win and finishing second in the championship. He has been working so hard to achieve his goal and it‰Ûªs nice to see a teammate and a friend succeed like this. I‰Ûªm really motivated for the future now and would just like to thank the whole Rockstar Energy Husqvarna team for all their support. We have two months to go till Dakar and I think we are really strong as a team and I‰Ûªm looking forward to it ‰ÛÒ it‰Ûªs a really important race for all of us.‰Û 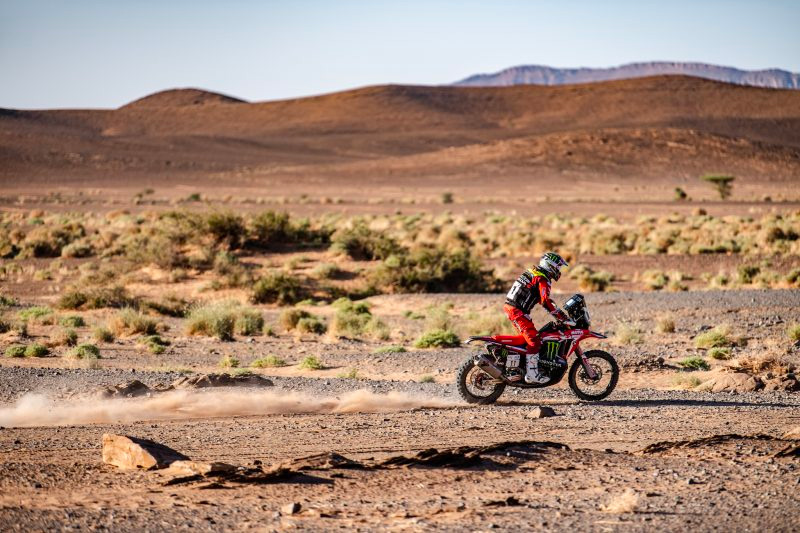 The Spaniard capitalised on his possibilities, riding a fine final special to post a finish just three seconds short of stage winner Toby Price and conclude the rally on the third step of the rostrum, with a seven-second advantage over the fourth place finisher.

"Fighting for the podium was something possible, so today I went out to try for it and things went well," Barreda said. "It has been a difficult race, very full, with many different types of terrain, some complicated navigation. It has not been bad as preparation for the Dakar, which is the big objective that we have and which we have been preparing for all season. The team has worked hard this season and now there is only the final stretch of preparation before the 2020 Dakar. 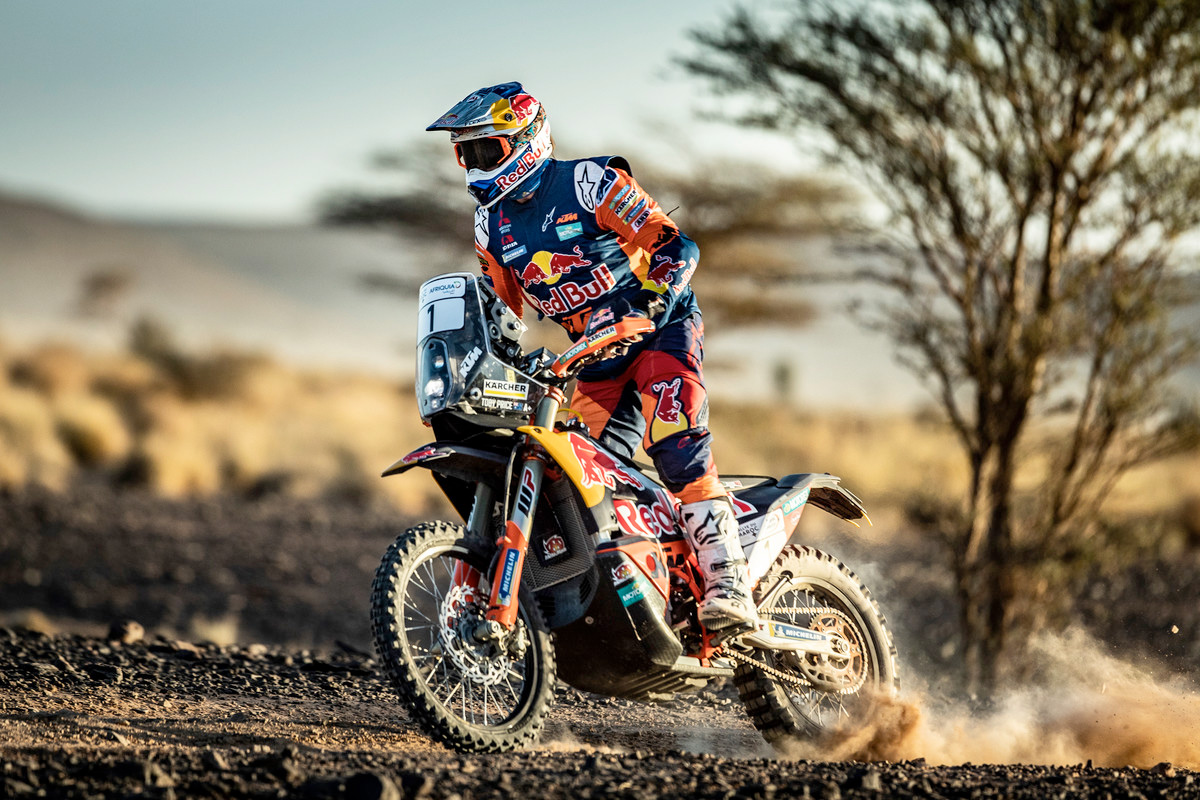 Defending World champion Toby Price won the final day and just missed the overall podium. Photo Marcin Kin.
Lying fifth overall after day four, Toby Price came into the short, final timed special with eight minutes to make up on the leaders. The Australian was the 15th rider to enter the stage and although the start position would often prove to be an advantage, Toby would still have to catch and pass several riders ahead in order to make up time. Pushing hard, right from the start, he gained on the leaders with every kilometre. Unfortunately, a small crash resulted in the reigning Dakar Champion losing too many seconds and despite pushing on for the rest of the stage to ultimately top the day‰Ûªs standings, he was unable to make up enough time to take the event win. Fourth overall, Price now looks ahead to the 2020 Dakar Rally and the defence of his title.

‰ÛÏIt hasn‰Ûªt been a bad rally for me, I only just missed out on the podium, which is frustrating, but it‰Ûªs been really good training," Price said. "I knew I had to push really hard on that last stage and was making up good time but then had a small crash and gave myself a bit of a stiff neck. I missed out on the podium by just seven seconds but all-in-all I‰Ûªm pleased with how I rode. Navigation was really tricky here and we had to learn to ride with the minimum of information. I‰Ûªm hoping that will put us in a good position for January and the Dakar Rally.‰Û