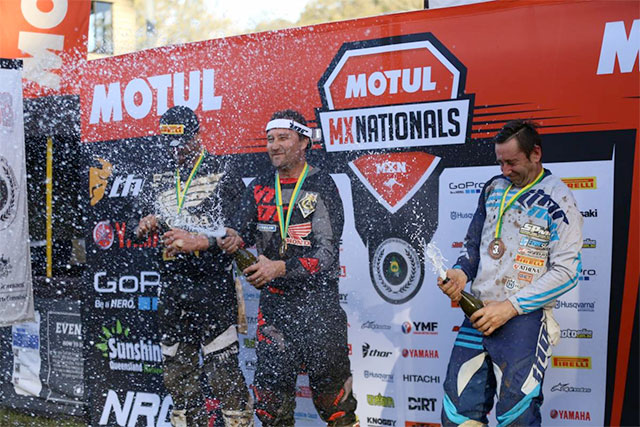 Multiple time Australian champions and true legends of the sport came out of retirement to race in the Yamaha Motorcycle Insurance 30-39 years Veterans and Over 40s Veterans class's at Conondale yesterday in conjunction with Round 7 of the Motul MX Nationals.

Craig Anderson proved he still has plenty of speed, even after finishing his professional racing career, by taking the win in the 30-39 years Veterans class while Cameron Taylor wrapped up the Over 40s Veterans class win.

With the track a Conondale receiving a huge drenching on Saturday night, when the veteran competitors headed out for two races yesterday, riders were greeted with a circuit which dished out some of the toughest conditions riders had seen in years.

When the qualifying session was up, Anderson aboard his number 100 Honda machine took the fastest qualifying time in the YMI 30-39s class with a 2:24.226 lap time, followed by fellow Honda rider Malcolm Cash in second, while KTM‰Ûªs Andrew Haack wrapped up the session with third pick of the grid.

The YMI 30-39‰Ûªs class were the first class to take off for a double gate drop, and it was former Australian Champion Anderson who took no time at all to move in to to the race lead, followed by Husqvarna mounted Steven Powell and Cash.

As race one came to a close, there was little change to the top positions in the YMI 30-39 years class, Anderson continuing to put significant ground in between himself, and closest competitor Cash, who had gotten by Powell to move in to second position.

So when the chequered flag flew for the YMI 30-39s class, it was no surprise to see the number 100 machine of Anderson cross the line victorious, followed by Cash in second while Powell finished in third.

In race two for the Vets, once again it was Anderson who took the YMI 30-39s class lead, followed by Cash in second, and Husqvarna‰Ûªs Robbie Marshall in third, and when the chequered flag flew for the final time that‰Ûªs where the top three finished. Anderson crossing the line with yet another victory in the YMI 30-39s class, followed by Cash and Marshall who wrapped up moto two in second and third places respectively.

With Anderson going undefeated across both motos at Conondale, the Honda backed former Australian Champ finished the weekend by adding a Yamaha Motorcycle Insurance 30-39 years Veterans Australian title to his name. Second in the championship was awarded to Cash, while Victorian Veteran Powell wrapped up his outing yesterday with third spot on the YMI 30-39 years‰Ûª podium.

‰ÛÏYou never really know what to expect when it‰Ûªs a mud race, and not being my favourite surface I just came here to do my best as always and we managed to do that today,‰Û 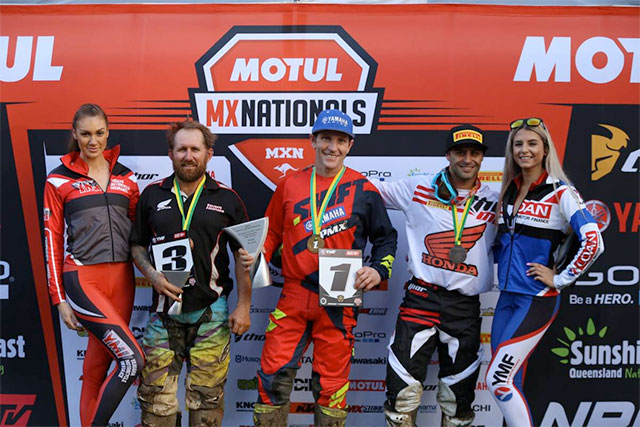 Yamaha Motor Finance Australian 40 plus Veterans class podium
It was Yamaha backed Cameron Taylor who emerged as the early man to beat from the minute bikes hit the track in the 40 plus Veterans class , setting the fastest qualifying time with a 2:22.768 lap, while Honda‰Ûªs Aaron Hunt took second gate pick, followed by fellow Honda rider Yarrive Konsky who qualified in third.

When race one kicked off for the YMF Over 40s class yesterday, the eldest riders of the weekend had the opportunity to chase down the YMI 30-39s class, with a double gate drop.

It took no time at all for fastest qualifier Taylor to move in to the race lead, where he stayed for the entire moto. And when the chequered flag flew on race one, no one was able to catch the Yamaha superstar.

Finishing in second place in moto one for the YMF Over 40s, was Hunt, followed by Konsky in third. Mark Oberthur wrapped up the opening 40 plus moto in fourth, while Michael Dennis completed the top five.

In the final race of the day for the YMF Over 40s at Conondale, it was a matter of who could get closest to Taylor‰Ûªs youth like form, however once again, the former Australian Champion‰Ûªs speed was unmatchable, and when the chequered flag flew for the final time yesterday, Taylor was victorious once again.

Second place in moto two was snatched up by Konsky, while Dennis lifted his game to finish in third position. Oberthur wrapped up his second race yesterday in fourth once again, while Hunt completed the top five.

With 1,1 results Yamaha Australia‰Ûªs Taylor went undefeated at Conondale, proving to the masses that he remains the YMF Over 40s Australian Champion. Second place in the championship was awarded to Honda backed Konsky, while Hunt collected third position on the YMF Over 40s podium.

‰ÛÏI still really enjoy going racing. There wasn‰Ûªt too much competition for me today to be honest (laughs) but I love going out there and getting on to a national level track,‰Û