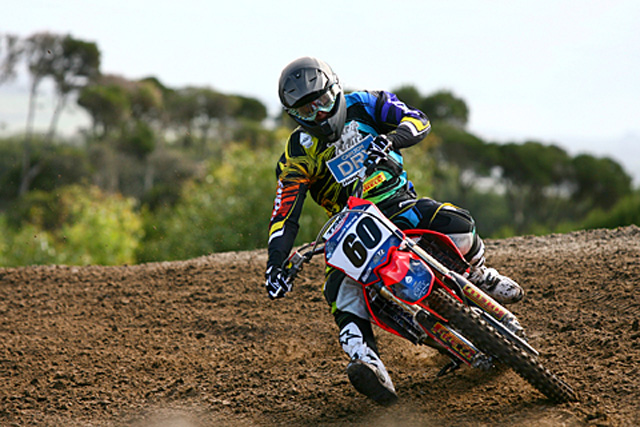 The first round of the 2012 Victorian Motocross Championships was held at Wonthaggi in the states south-east on the weekend (17/18 March), attracting over 380 competitors including some big name national riders.

In one of the biggest entries for a state title was due to Wonthaggi hosting the third round of the MX Nationals in late April and with the MX Nationals starting in a week and a half, the Wonthaggi Circuit provided further race tuning for riders and machines in race conditions before the opening round at Conondale on the 1st of April.

The first round was hampered by a brief shower, creating braking bumps and ruts as the track adjusted from competition. Around lunchtime the sun belted down, causing the track to dry out, with A grade open riders making use of the prime conditions.

The A Grade Open had an international flare as newly signed British champion Honda Thor Racing's Brad Anderson demonstrated his willingness to hold speed over jumps and obstacles to take out the win for the day.

Throughout Moto one, Brad Anderson showed his speed and agility dominating the first heat of the day. Todd waters demonstrated that he has adapted well to his new Suzuki, but was unable to stop Honda's charging Brad Anderson as he set the pace.

In moto 2, Kirk Gibbs looked strong on the Yamaha 450; he tried to make a charge, but was unable to catch Anderson who went on to victory.

Brad Anderson continued his form on the 450 piloting it home for another victory in the final moto, with Todd Waters closely behind him. Motul Pirelli Suzuki 's Todd Waters did put a move on Anderson, but was unable to make it stick, leaving Waters to settle for the second spot for the race and overall for the day, and Kirk Gibbs rounded out the final step.

" I really enjoyed the day, it was good to get the win said Anderson. "I knew there was going to be some good riders out here today and Todd rode well"

"I came here to race and blow some cobwebs out of the system, It was good to get the race under my belt and I will now look at doing another preseason race up in Queensland next weekend." the Carlton Dry Honda Racing Thor rider concluded. 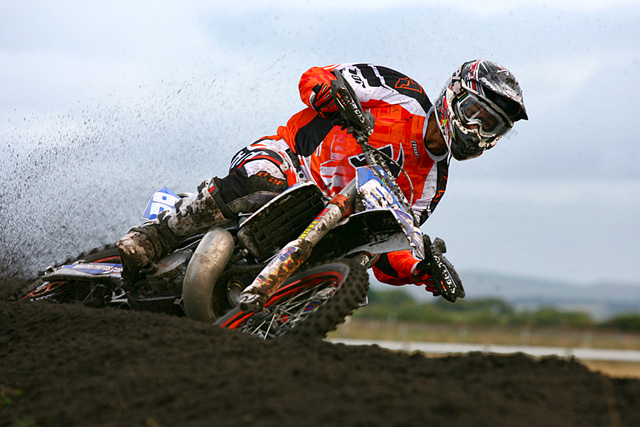 The Under 19s class became a game of who could beat Joel Milesevic, with the only rider having the answer being Dylan Long when he took a race win in the third moto.

In his rookie senior year, Milesevic is definitely proving he has the speed that is hard to match in the 19s wrapping up the overall for the day, with Choice Suspension KTM rider Long coming home in second after his convincing win in the third moto. Dylan Leary on his KTM250 2-stroke was charging all day, and rounded out the final spot on the podium.

In the women's class it was reigning champion Kristy Gillespie who continued her dominating form wining the first moto.

Moto 2 seen Gillespie with a sluggish start before tenaciously making her way to the lead in the opening lap. Tayla Jones, tried hard to keep Gillespie in her sights, she was able to see the reigning number one plate ahead, but still needs to find a fraction more speed to be able to compete bar to bar with Gillespie. Lapped riders made the gap smaller by the end of the moto with Tayla Jones on the back wheel of Gillespie for the chequered flag.

In the third moto, Tayla Jones fought off Gillespie for a moto win before Gillespie charged home strong in the last race of the day wining the final moto by 13 seconds. 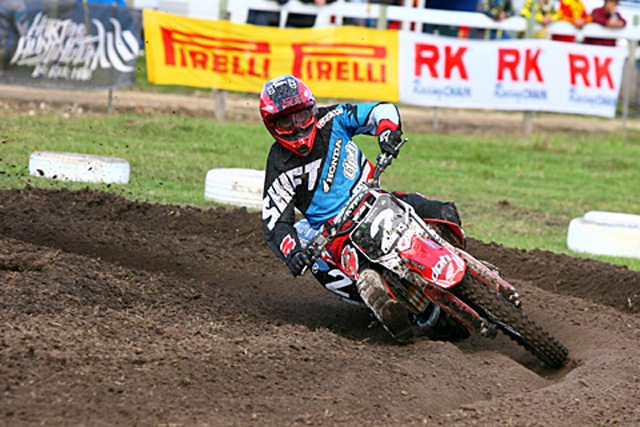 Cheyne Boyd looks as though he could be a threat at the Monster Energy MX Nationals in the MX2 class.Photo CreditKAJX
With the Victorian event taking place over two days, the A grade Lites took to the track in Sunday in pristine conditions with mild morning mild drizzle falling and the overcast conditions keeping the track moist until later in the day.

With more than a gate full of riders, the A Grade Lites was split into two heats. The class had a national feel to it with the likes of Cheyne Boyd, Ford Dale, Todd Waters, Lewis Woods, Kirk Gibbs, and Adam Monea appearing at the start gate.

Cheyne Boyd demonstrated that he is a force to be reckoned with on the 250 four stroke in 2012 winning all before him against some of the favourites heading into this year's MX Nationals.

In the first heat Matt Ryan grabbed the holeshot, before he was hunted down by Cheyne Boyd and Under 19s rider Dylan Long trying to keep the pace of Boyd. Sam Martin made it to third place after passing Matt Ryan who would finish fourth. In the second heat, Kirk Gibbs came out charging. Joel Milesevic could not match his pace settling for second, while Dylan Leary beat Todd Waters over the line for third place.

In the second round of heats, Luke Arbon, Lewis Woods, Joel Milesevic, and Todd Waters would meet on the line. Waters securing the top step, Milesevic sat a bit behind him for second, while Lewis Woods had a comfortable third. Under 19s rider Dylan Long, Cheyne Boyd, Ford Dale raced head to head in the next heat, with Dale taking the win after he was able to pass Boyd, and relegating the veteran rider to second. Dylan Leary held off Dylan Long for third.

Cheyne Boyd charged home strong in the first heat of the final moto's, while Adam Monea found his feet after resolving earlier heat machine issues. Rookie Joel Milesevic finished third on this KTM 2-Stroke. Ford Dale was able to take his second win in the final heat of the day, with Dylan Leary in second and Matt van Slooten in third.

The Sunday Belonged to Boyd who was happy with the track as well as his form heading into the nationals.

"The circuit and the layout at Wonthaggi were awesome and the track crew did a pretty decent job preparing it," Boyd praised.

"It was good to get my feet wet with the 250. The first round went really well. "We've been working really hard. I knew I could win that because over the last few months I've ridden really well at practice. Boyd added

Main Photo: Brad Anderson on his way to his first win in 2012
Photo Credit: KAJX