An up and down weekend for the BCP Pro Circuit Honda 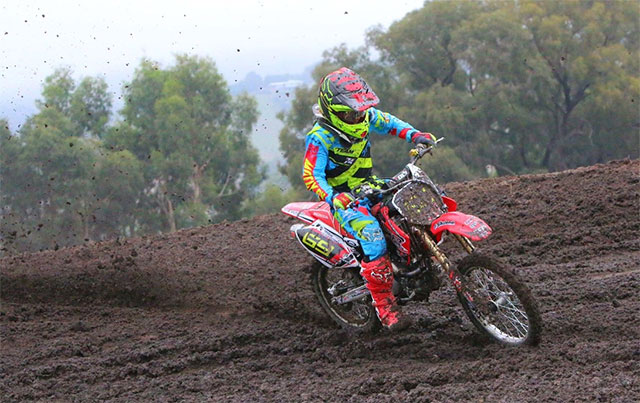 It was a steep learning curve for BCP Pro Circuit Honda Junior Development Riders Taj Marshall and Tom Bell over the weekend as they tackled round one of the Victorian Junior MX Titles at Outtrim. 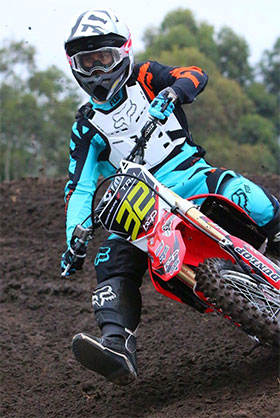 Taj Marshall during practice
With a stacked field in all classes due to record entries and numerous interstate travelers the event was a who‰Ûªs who of Australian Junior Motocross. Tom Bell on his Honda CRF150R struggled with the slippery track conditions early in the day but managed to bring it all together in race two where he got himself a great start and secured a solid second place finish.

A small crash in the third and final moto cost Bell any chance of the win overall on the CRF150R however he did manage to earn himself third place on the podium, with solid points going into round two at Warrnambool in a months time.

Bell‰Ûªs team mate and reigning national junior champion Taj Marshall carried some strong momentum going into the event on board his CRF250R. And after setting some lightning fast times during practice Marshall jumped out of the gate in moto one with a solid holeshot, only to run wide exiting turn one where a drainage ditch catapulted him over the handlebars.

A rattled Taj Marshall was minus his peak and had some bent handlebars to deal with, but none the less put on a huge charge from last place right the way up to sixth before a mistake dropped him back to eighth. By the time the adrenaline wore off he was unable to find the pace and concentration throughout the remaining two races finishing with two seventh placings for seventh overall. The knock to his head was a decent one and took the wind out of his sails.

Both Marshall and Bell will be joined by their BCP Pro Circuit Honda Junior Development Team mate, kiwi Trent Collins for Round 2 of the Vic MX titles where the team will chase their first state round victory of 2016.